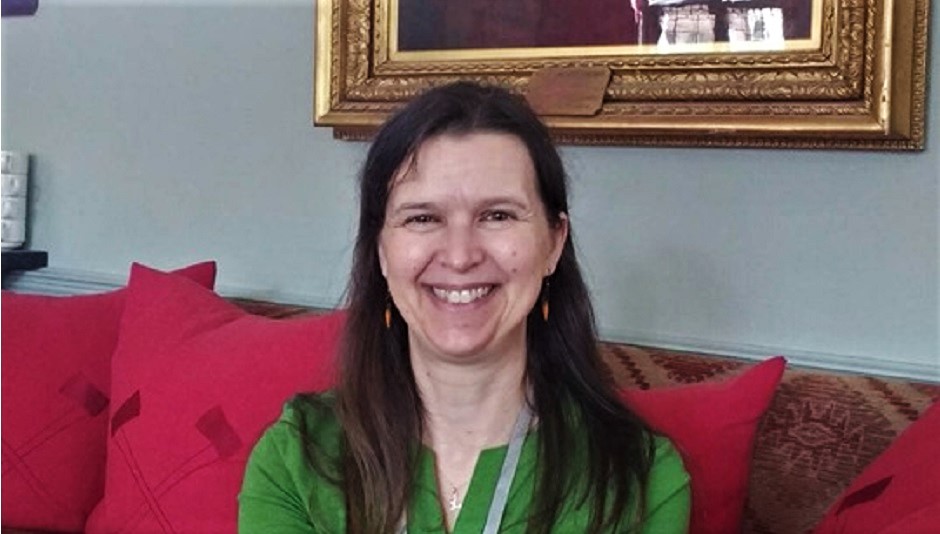 GL: How did you originally hear about the Digital Gladstone project?

LG: I think I saw it posted on Facebook, on the Gladstone’s Library page.

And you were following that because you were already aware of the Library?

Yes, and because I’ve been down here to a couple of events like Gladfest. And I keep thinking I must come to the coffee shop!

So, do you live nearby?

What made you interested in wanting to volunteer with the Digital Gladstone project? Because you also have your own business, so you’re going to be busy!

I’m busy but I can choose how much work I want to do and how much time I want to spend on other things, and this was something that I thought would be interesting as I’m interested in history. I thought that volunteering would give me some experience with historical documents and old handwriting, which may be useful for my translation business in the future.

Do you find it easy to read the handwriting or is it quite challenging?

It can be quite challenging - depends on who’s writing!

A lot of people say they can tell when Gladstone is tired, because his handwriting gets worse!

Yes, his handwriting gets a little challenging at times…

You said you’d been to a few events here at the Library, is that your main connection with the place?

Has your background always been in translating? Or is it a new career?

It is a new career. I initially studied languages at university quite a long time ago now, and then I went into IT instead and became a programmer for a few years.

A different kind of language then!

That was my attitude towards it! I thought, it’s fine, I can do languages!

Is that how you found it?

Yes, pretty much. The language wasn’t the problem though, it just became a bit tedious after a while. So, I went traveling and came back and got married and had kids and spent a long time with the children because we’d moved up here with my husband’s work. It wasn’t until my youngest went to high school I decided it was time to start doing something else, and I thought, I’m good at languages, I’ll be a freelance translator. I can work from home, I can do the hours I want to, I can fit it around having, for example, to take my son to the orthodontist, or school holidays, or all the various commitments that come up.

And how does volunteering on the Digital Gladstone project compare with your translating business? Are there any similarities?

There are some similarities with some proof-reading jobs I’ve done, such as patient notes from French doctors, whose handwriting is definitely interesting! But I only proof-read, I never attempt to be the first translator for them because I can’t read the handwriting very well.

In a way this is similar as it’s something you have to get used to. So, you’re now doing the first line transcriptions of each letter in the Digital Gladstone project – are they all Gladstone’s letters?

Either to or from him, yes. So, they’re not all written by him. The current folder I’m working on is full of stuff that people had sent to him. They’re on all sorts of topics from all sorts of people.

So, is that even more complex?

Yes, I’d got used to Gladstone’s handwriting and now I’m getting used to other people’s! Some of it is beautiful copper plate and some of it is virtually illegible.

What do you do if you find something illegible?

Put in a lot of questions marks on my spreadsheet! And just record what I can.

That makes sense. What happens when you come across something you can’t translate in your translation business?

If it’s a case of illegible handwriting or something that’s been scanned and you can’t read it, then you’d just mark it as illegible. If it’s a case of an abbreviation that maybe a client uses then you can go back and ask the client and say, ‘sorry I can’t find this, what does it mean?’. Because sometimes they use internal jargon and things and it’s not always easy to pin down. Or you ask colleagues.

Are there any particularly memorable letters you’ve transcribed?

I quite like the personal bits, where he’s worrying about the family or saying to his wife, ‘I wish I was there with you’, because he’s stuck down in London working and his family is up here.

Yes, it wasn’t exactly a 9 to 5 job! That’s nice to hear though. Are there a lot of letters like that? Does he write to his family frequently?

There are a lot of letters to his wife, yes.

What do you think the benefits of volunteering are? Not just here, but in general?

I would say the benefits of volunteering are that you get to do something that you feel is useful as well as learn to do new things which are interesting. If you don’t have a lot of interaction with people, it’s also be a good way of getting out and taxing your brain a little.