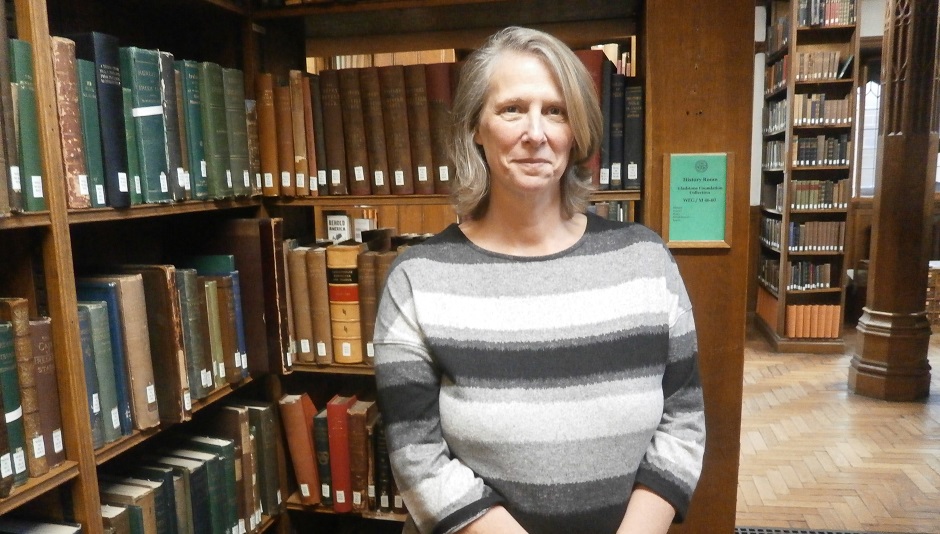 GL: How did you find out about the Digital Gladstone project and the volunteering opportunities attached?

SB: I saw it on Facebook - I follow Gladstone’s Library. We used to live in Hawarden, about 30 years ago and I still have an interest in the village. So when it popped up on Facebook with a link, I read a bit more about the project and was really impressed by the funding from the Carnegie Corporation [of New York]. I recently retired and had the summer off, so I was looking for something to do that would exercise my brain. I had been thinking about charity work and I’ve always had an interest in history and local history, so the opportunity seemed to be ideal. I dropped an email to Liz [Fife-Faulkner – Digitisation Project Manager] and went from there.

I’ve been doing family history research - I’ve traced nearly 6,000 family members around the world, which is quite small compared to the more dedicated people. So I know the importance of making transcribed documents available online, so that wherever you’re based, whether you are in Australia or America, you can see documents from the UK and vice-versa, and that’s really helpful for researchers in all sorts of areas.

What do you think about the project as a whole? It is quite ambitious…

I think it’s an excellent project to make these items available rather than being hidden away. It’s wonderful that these letters were kept by different family members – it makes you wonder how many emails and Tweets will be kept from today. But it’s a slice of history and we’re very fortunate that they have been kept in such a good condition. The fact that they will be able to be viewed by people around the world in the future - it’s wonderful that the Carnegie foundation have recognised that. And I think it’s an indication of the standing of Gladstone still. As local people, we see this as a local library, it has always been here, but perhaps forget that internationally it’s got such an excellent reputation. And it’s a reflection of that, and the hard work of the team, that the Library won the funding and is progressing with the project.

We’ve got a team of about eight volunteers all working on the project at the moment. Have you met any of the other volunteers?

Not yet - Liz has organised a Christmas gathering so it will be really nice to meet them because I see their names on the work folders and wonder who they are, so it will be interesting to find out more about them.

Moving on to you - can you tell us a little bit about your background, are there any elements which you think feed into the volunteering? Do you volunteer anywhere else?

I previously volunteered with a couple of charities and with the Share Aid project set up to help homeless people - initially refugees and then people in Chester and Flintshire. I was helping with that until I injured my back, so I couldn’t lift things and had to stop unfortunately. Before I retired I was a journalist and worked in PR, so with my background I’m always after that unknown nugget of information. At the moment what we’re doing is transcribing the first sentence of the first page of each letter and the first line of each subsequent page, but to do that you have to read quite a lot of the letter or the document to put it into context. Sometimes you look at a word and think: ‘I’ve got no idea what that means,’ and then you read the line before, or the page before, and you think: ‘Oh, well that’s because…’ So, it’s utilising those sorts of skills - trying to work the problem out and think sideways as well.

We’re looking forward to the next stage where we can do the full transcription, because it’s absolutely fascinating.  At the moment I’m working on a bundle of 100-plus letters to Robertson, Gladstone’s brother, Fortunately either Robertson or a family member kept all these letters safe, so it’s like a one-sided soap opera. You don’t get to see Robertson’s reply, but you see what Gladstone writes virtually every day. The letters can jump from how the children are, to off-the-cuff comments on peace in France or debates going on at Parliament, to the West Indies - where the family had business interests - the sale of the property at Seaforth where William grew up, concerns about their sister Helen, a planned endowment for St Thomas’s Church in Toxteth, Liverpool, and more.

So you feel like you’re getting to know Gladstone a little bit more?

Absolutely, yes, and the rest of the family as well. I feel honoured that I can look at these documents. That’s what you’re always searching for as a journalist as well - a first-hand account. Journalism is said to be the first draft of history, but really it’s personal letters because that’s probably the closest to the truth you can get. When you interview somebody they give their account of what they’ve experienced -  and they may well dress it up a little - but when if somebody writes to a close friend or relation, they are much more likely to give a more honest version.

Did you begin with any kind of specialist handling guidance when you started?

Definitely -  for example, I’m a great one for hand cream as I’ve got itchy skin, but the first thing you do when you get here is properly wash your hands. Before I started Liz gave me special document handling advice and she’s usually got an eye on me when I’m examining a letter. There’s a nice setup with a table and laptop  for the volunteers to use - it’s obvious that the money has been invested in the right places.

And how are you getting on with the handwriting – are there many instances where it has been difficult to decipher?

The faster Gladstone writes, the worse he gets. I’m guilty as well - I’ve got really bad long-hand now because I’ve been doing short-hand for so long, so I understand. And you can see when he’s got a new pen nib and it’s better. I’ve often come across two copies [of the same letter], and one is a quick one, and another person has done a second fair copy to circulate around the family - though it may have been Gladstone as it looks very similar writing.

And then there are names that we don’t always recognise. We have a great book with a list of people who came into contact with Gladstone, so we go through that and try to work it out.

It’s tempting to spend a long time thinking ‘Is that an ‘i’ or is it a ‘g’?’ But that’s not what I’m meant to be doing – though it’s that knot that you want to unravel each time -  so instead I put brackets with questions marks in the spread sheet where each page and image is logged. The full transcription stage is when the word will be recognised and the log updated.

How long have you been volunteering for the project now?

For the last two months I’ve been doing one afternoon a week, from 2pm-5pm. What we do is list every item before it’s scanned, logging them in a spreadsheet that Liz has devised. There is a strict procedure to follow, to ensure that the image scans link up with the document.  Some of the letters can be eight to 12 pages long, and a small number are very fragile, but they have to stay in their bundle because if we took them out then that could cause more damage, or they might get disassociated from the bundle.

So, I’ll come in, wash my hands, log on to the laptop and unwrap the bundle I’m working on. Liz pre-sorts the bundles - we have a box that has the bundles with our names on, so we know which one is ours. At the moment I’m going through a large pile of letters from William to Robertson. There had been a spreadsheet made for it already, but it hadn’t been fully populated - it just had occasional bits, with maybe the first few words of the first line. I log who is the document from and to whom, and other details, for example, if the letter has a black mourning edge and where it was written such as Westminster, Fasque or Hawarden. Then I note the first sentence of the first page – and sometimes the first sentence can be the whole page, if he’s just doing a stream-of-consciousness letter to catch the last post. And then for subsequent pages within that letter it’s just the first line. Then I move on to the next one, and I just work through the bundle. I’ve been working on this one for the last four weeks, and I had a few items before that. Sometimes I can get through 10 letters in an afternoon, sometimes only half a dozen – it depends how long the letters are. If they are particularly illegible then it might take longer. It’s very methodical. I’m not a natural with spreadsheets – I’m glad it’s words in there and not numbers!

What has been your most exciting discovery so far?

I was hoping that there’d be a Christmas or New Year message but not in what I’ve been working on so far, other than ‘I hope you have a nice Christmas’ so that’s been a real disappointment. I think it’s just this continual soap opera – Where is he going with St Thomas’s endowment? What’s happening with the Seaforth property? What’s happening with Helen?

I don’t think I’ve had the big discovery yet - we all long for that. It’s nice when you come across mentions of things like him going to see the Queen because it reminds you that this isn’t just a chap writing about every day affairs – he was in charge of the country. There was one where he was talking about ‘the loan’, and it turned out that he was talking about a loan on behalf of the country and it totalled millions.

Quite often the letters are written not quite grammatically correct and, as a former journalist, I want to put full stops in, or say ‘that’s three subclauses in one sentence, now stop!’ But we log it as it’s written.

I was away on holiday last week and I really did miss it. It’s great working with Liz because she’s so fun to work with but it’s also fascinating what we’re doing so it’s a pleasure to come here. It’s my little retreat from life.