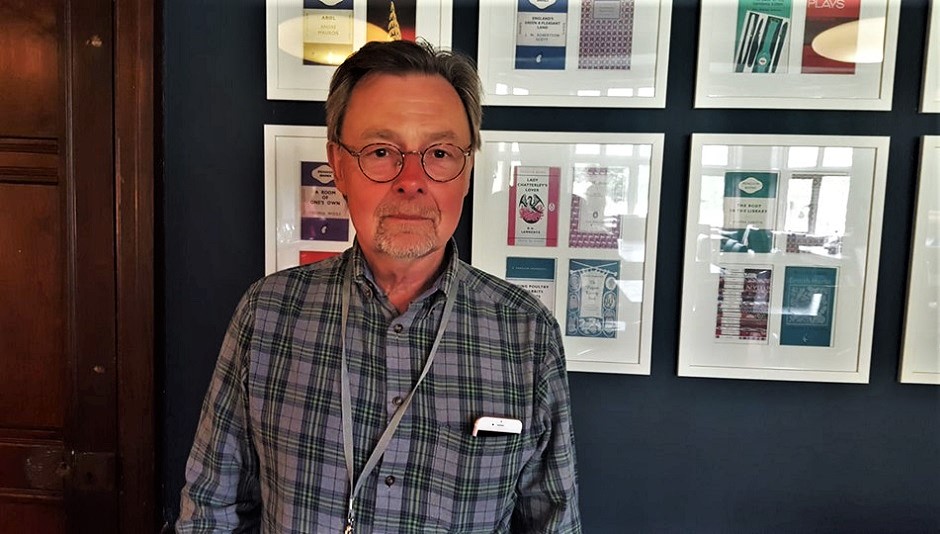 GL: How did you find out about the Digital Gladstone Project?

DL: My wife and I are friends of the Library. We’ve been coming here for quite a few years and it was in one of the e-newsletters that you sent out. I am retired and thought it would be something I’d be very interested in doing. I like history and I like the Library so I thought I’d come and see if I could be of any use to you. That’s how it started.

Fantastic - so you saw a volunteering opportunity, but it wasn’t necessarily because it was to do with digitising that you applied? You just wanted to come and be involved?

Yes, and to help the Library really.

And you said that you were aware of Gladstone’s Library prior to this?

Yes, we’ve been coming for probably about five years now or something like that. We come to the Gladfest events and lectures and sometimes we come for meals in the evening as well.

So, are you fairly local?

I live in Chester, on the South side. About 12 minutes on the motorbike.

You might be our only user who rides a motorbike! What made you consider applying to become a volunteer? You’ve said you wanted to get involved with the Library, but were you looking for ways to develop your existing skills or spend your time, or was it something else?

Honestly, I just really felt like I wanted to try and give something to the Library. It wasn’t that I needed to develop my career skills or anything like that as I’m retired but I am just very interested in history and thought maybe I could do that now!

Did you have any queries or reservations about getting involved?

No. The only thing I was slightly apprehensive about was my ability to read some of the letters because the quality of the handwriting varies hugely. Some of the early stuff when he [W.E. Gladstone] was at Eton and just after he’d left school, is done in a beautiful copperplate that it is easy to read but later on when he’s in a crabby mood at midnight in Parliament it’s not as good. You can end up looking at a piece of writing for 10 minutes and then just give up before coming back the next time and getting it in the first minute.

So do you have a particular cut off point - is it 10 minutes and then that’s it?

Yes, after that I just put question marks and move on. It’s like Elizabeth [Fife-Faulkner - Digitisation Project Manager] said when I first started, ‘Don’t worry, you will get your eye in’ – and I think what she meant by that was that when you first start it can be very difficult but the key is not to be put off because you do start to understand his [Gladstone’s] foibles and little shorthand phrases.

So, you’re transcribing the letters mainly then?

Yes, what we do is take each document, which has already been numbered, and transcribe the first sentence on the first page. That might sound easy, but I’ve got to tell you that Gladstone had a very bad habit of not using full stops - you might be trying to transcribe the first sentence and end up practically writing the whole thing out! Sometimes you just have to decide when you’re going to stop and then if the document is a multi-page one you just transcribe the first line of the subsequent pages. There are helpful guidelines regarding controlled vocabulary, so that anyone who may use the document in the future can do one search for a standard keyword and receive all the results, instead of each volunteer having indicated something on their documents in a different way, and multiple non-standard search terms then being needed to get everything. Therefore we all use the same standard format.

And what is your background?

In the early 1960s I joined the Royal Air Force as an Apprentice Electronics Engineer.  I stayed in the RAF for 15 years and when I left me and my wife to be settled in the North Wales area. I then went to work for a company that made disc drives – which in the early 1970s were about the size of a washing machine! They were huge pieces of equipment! I stayed in that industry for quite a while in one way or the other but then I joined Cheshire Police as a civilian research officer because they needed people with mathematical skills for their research and statistics. I stayed on a little bit after my 65th birthday until I was 68, and then did nothing for a few years, and then I came here.

Great! So very, very different skills than those you’ve been employing here! It’s really nice that people come to us from all different backgrounds…

Yes, I think it’s useful sometimes. I think it’s actually better not to be academic doing this job because that’s really other people’s role further down the line. We just need to do the standard, simple job so that it’ll get to a point where the information can be used - but we have targets and timescales for the project that mean we can’t and shouldn’t being doing much interpretation of the texts. You can’t waft along doing things at your own speed, even if sometimes you come across some really interesting stuff that you might want to take some time on. For example,  some of the letters are really interesting because people have written on the paper but then turned the actual letter into an envelope and sealed it with wax because using too much paper was quite expensive in Victorian times and envelopes hadn’t been invented yet. So, what you’ll get is a letter with the address and stamp actually on the back instead of separate.

What do get from volunteering? When you leave on a Friday afternoon what do you leave with? Is it just a pleasant way to pass the afternoon?

It is a pleasant way to pass the afternoon, but you also get an insight into another world. There aren’t many volunteering jobs where you as an individual can pick up a piece of paper that’s well over 100 years old and which was handled by a very eminent person in history who had a very broad range of interests and skills. It’s not all about religion, it’s not all about politics – it’s like you can almost smell the candle wax on the paper as you go back 100 hundred years. It really is interesting to read some of the stuff that they were worried about which nowadays you would think, ‘What are they worried about that for?’

For example, there are fantastic letters he wrote to his wife (and he wrote to his wife in Hawarden pretty much every day while he was busy being Prime minister in Westminster - sometimes there are two letters written by him to her in one day). I worked out that he could be in the House of Commons at 9 O’clock and write a letter, post it, and it would be in Hawarden by 4 O’clock that afternoon which is much speedier than now! But sometimes you would get two post runs per day, so he’d send two letters!

Wow, so you’re working with his personal letters as well as his political correspondence?

Oh yes, some of them are business letters, some of them are between him and his Estate managers - some are mundane, some are personal, and some are quite poignant. I remember one I read where he was very excited about the birth of his daughter and he was writing to everyone about his ‘lovely daughter’ [Catherine Jessy Gladstone] but in the present, I know that she dies when she’s four from Meningitis. It’s a bit like being God - here he is with this dear little girl that has just been born but history records that things will go wrong, and she won’t make it.

That’s such a sad thing. On a lighter note, have you had any favourite letters, or just really interesting and rewarding finds?

To be honest I think that the really rewarding thing when you read [Gladstine’s] personal letters is just how genuinely concerned he was about the people on the estate in Hawarden. He knew everybody in the village and wasn’t just coming through on a coach, acting like he was Prime Minister so that nobody should bother him. He’d write to his wife and say that ‘Mrs thingamabob at such and such address is in want of coal’ to make sure she was okay. He was also very concerned about the religious health of what he regarded as his flock - wanting to make sure that everyone in the parish went to the right church and had the right instruction. But it’s not something that you understand from just reading one or two letters – it’s a picture built up over a period of time and a number of letters where you start to see that he was a nice man.

Do you feel like you’re getting to know him?

And how long have you been with us now?