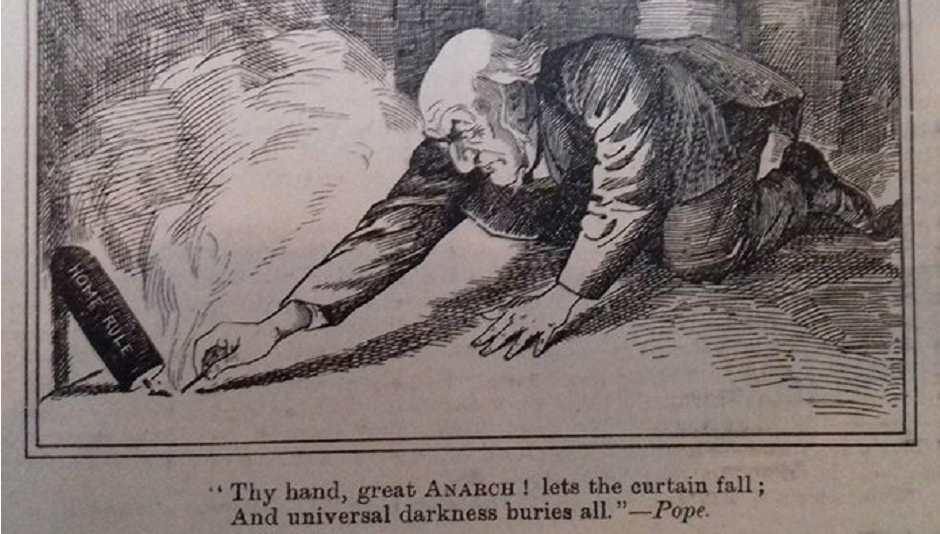 The items on show in our Display Cabinet this month have been curated by intern Alex Locke. Entitled ‘The Irish Answer’, the display concentrates on William Gladstone and Irish Home Rule, and shows not only the complexity of the issue, but the many different types of printed matter the subject generated. In this blog, Alex gives us more on one of the major political problems of the 19th Century…

‘I ask that we should apply to Ireland that happy experience which we have gained in England and in Scotland, where the course of generations has now taught us not as a dream or theory but as a practise and as life, that the best and purest foundation we can find to build upon is the foundation afforded by the affections, the convictions, and the will of the nation; and it is thus, by the decree of the Almighty, that we may be enabled to secure at once the social peace, the fame, the power, and the permanence of the Empire.’

From a speech made by William Ewart Gladstone, 8th April 1886

The Irish Question has been asked again in the last year, now in reference to Brexit and Ireland’s future in the United Kingdom and the European Union, but originally it referred to calls for Irish Independence, and what, if anything, Britain should do about it. William Gladstone’s involvement in Ireland is something we are often asked about by guests and visitors, and now is a perfect time to look at how Gladstone tried to answer this question when it was first being asked.

Even before he committed himself to Irish Home Rule, William Gladstone had worked to pass legislature giving Ireland greater sovereignty from England. He backed then Prime Minister Robert Peel in repealing the Corn Laws that kept the price of bread artificially high during the great famine, and in his first premiership in 1869 Gladstone passed the Irish Church Act, freeing Irish farmers from paying tithes to the Church, and a big step towards ending the Protestant domination of Ireland known as the Protestant Ascendancy.

However Gladstone’s first real attempt at an answer came in 1886 with the Government of Ireland Bill, or the First Home Rule Bill as it’s known now. Good on Gladstone for trying, and it was the first time a real attempt at Home Rule had been tried, but all that doesn’t change the fact it was a complete failure. Gladstone drafted it in secret, not letting key members of his own Liberal Party know the details until after it was finished. This didn’t help anything and the vote failed at the House of Commons, split the Liberal party and led to a general election that saw Gladstone ousted from government just five months into his term.

The Grand Old Man wasn’t done though, and tried again in 1893 with the Second Home Rule Bill. Unfortunately Gladstone didn’t change his approach much and again drafted the whole thing in secret. Although this time it didn’t cause a split in his party, it did cause Gladstone to miss an embarrassing error of £360,000 – about £30 million today. Fortunately though this was corrected by the time it actually went to vote and was passed by the House of Commons but failed at the House of Lords. Some men try to solve their problems with violence, some with money, but Gladstone seemed to prefer calling General Elections whenever he had a problem, and wanted to again to protest the Lords but thankfully was stopped by cooler heads in his own party. 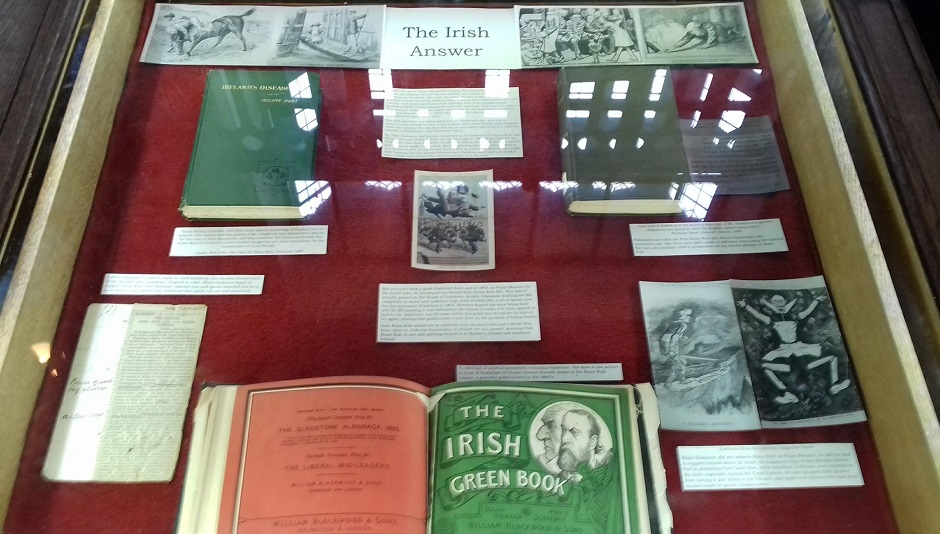 Irish Home Rule and the plight of the Irish was something Gladstone truly believed in. From a story told by Evelyn Ashley, Gladstone, upon finding out he would become Prime Minister in 1868 for the first time, was cutting down trees, paused, and said 'My mission is to pacify Ireland.' Gladstone did not even intend to get Home Rule achieved under his own name or even by his own party, originally intending to talk Conservative MPs in to passing it as a Tory policy, knowing that the House of Lords would likely only pass the bill if it came from the Conservative Party. This plan failed however when Gladstone’s son Herbert seemingly accidentally revealed his father’s commitment to Home Rule to the press in an incident known as the Hawarden Kite, as it was believed by some Herbert intentionally 'flew a kite' with the information to make the world aware of his father’s commitment and speed up action taken for Home Rule.

While Gladstone did not achieve his political dream while alive, it’s inarguable his contributions have had enormous influence on Ireland, as the acts he did pass lessened the influence of Anglican power in Irish society, and his pioneering stance on Home Rule and relationship with Irish political figures like Charles Stewart Parnell opened a door for Irish sovereignty that had previously been locked shut.

Alex’s display, The Irish Answer, will be on display in the History Room throughout May. To view as a visitor, join one of our daily Glimpses at 12pm, 2pm or 4pm.