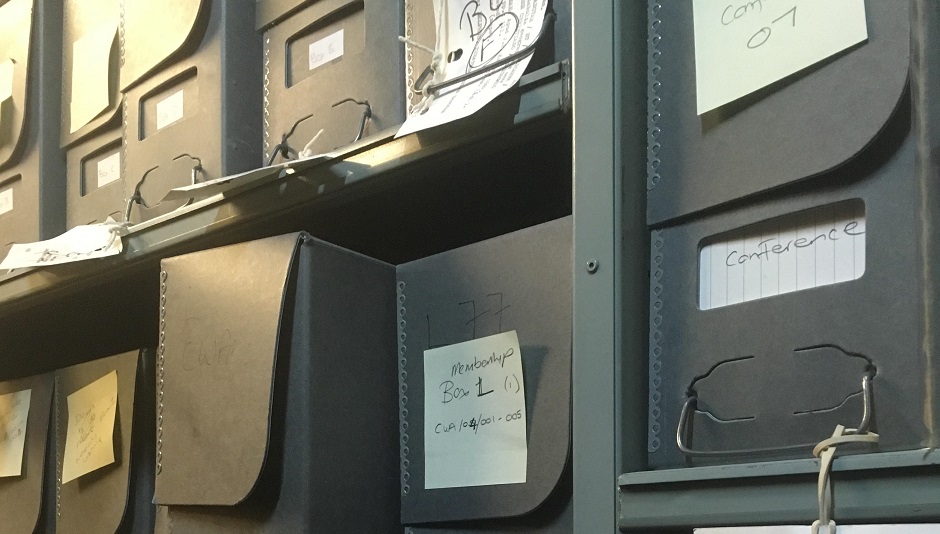 Gladstone’s Library has, for three years, been home to the British Crime Writing Archive, made up of materials from the Crime Writers’ Association and The Detection Club. Martin Edwards, the Chair of the Crime Writers’ Association and the President of The Detection Club has worked closely with the Gladstone’s Library team to make the collections publically viewable here at the library. This year, during our third Alibis in the Archive weekend, we are aiming to be able to display parts of the archive and showcase the work being done to catalogue it. This display includes original archive materials that will be showcased in our History Room display cabinet and scanned copies of archive material which will be displayed on boards around the History Room. Both will be available for participants to view over the duration of the Alibis in the Archive event. This blog examines the collection in more detail.

Founded in 1953 by John Creasey, the Crime Writers’ Association is well known as one of the most prestigious associations for anyone involved with crime writing. The CWA run the Dagger Awards which have been awarded to various novelists annually since 1955. Notable winners include Peter James (Diamond – sustained career excellence, 2016), Robert Harris (Ian Flemming Steel - best thriller, 2014), Frederick Forsyth (Diamond, 2012) and PD James (Silver – awarded to the Gold runner up between 1969 - 2005, 1972.) There are multiple ways to join the CWA, either with full membership if you are a fully-fledged published author of crime fiction or non-fiction, or associate membership for those that work indirectly in the industry, such as editors, bloggers, publicists, agents and reviewers. Although primarily a UK association, the CWA’s long history of success has attracted overseas members for almost as long as it has been running.

The Detection Club is also headed by Martin Edwards as President and is the longest running society of crime writers in the world. Founded in 1930 by Anthony Berkeley and a group of leading detective novelists including Agatha Christie, Dorothy L. Saywers and Freeman Wills Croft. Although the club is fundamentally a social and dining club, there are a number of books published by the Detection Club, such as in the 2016 publication Motives for Murder edited by Martin Edwards and comprised of 20new short stories written by Detection Club members.

The British Crime Writing Archive is vast - a few examples of materials held in the archive are the CWA’s monthly newsletter, ‘Red Herrings’, various committee meeting minutes, details of memberships, financial and legal documents and more. As part of the cataloguing process the team at Gladstone’s Library are creating spreadsheets that assign each individual document a unique classmark number, and filling in details such as the author, the name of document, the number of pages in the document, where the document can be found and any other relevant details such as if there are duplicate copies. Although sometimes this can be a longwinded process (such as numbering up over 1,000 membership applications as part of the cataloguing process!) it is very satisfying to see the collection become more organised and accessible.

The collection has attracted unprecedented interest and will certainly outgrow Gladstone’s Library. Anyone interested in hosting a section of the archive should get in touch via louisa.yates@gladlib.org.

Alibis in the Archive (21st - 23rd June 2019) brings together a programme of some of the best crime writers Britain has to offer right here to North Wales. Speakers and topics covered this year include Francis Fyfield on PD James, Alison Joseph on Agatha Christie and her pseudonym Mary Westmacott and Peter Robinson on his creation Detective Chief Inspector Banks. Residential tickets for this event are already sold out, however there are a few non-residential places still available which are definitely worth getting a hold of! Alibis in the Archive sessions take place in our Reading Rooms which in itself is a rarity, so this is the perfect chance to come and experience the atmosphere of Gladstone’s Library without fear of disturbing people hard at work. Non-residential tickets are priced at £125. Book online, call Reception on 01244 532350 or email enquiries@gladlib.org.

For more information on the Crime Writers’ Association click here.

For more information on The Detection Club click here.