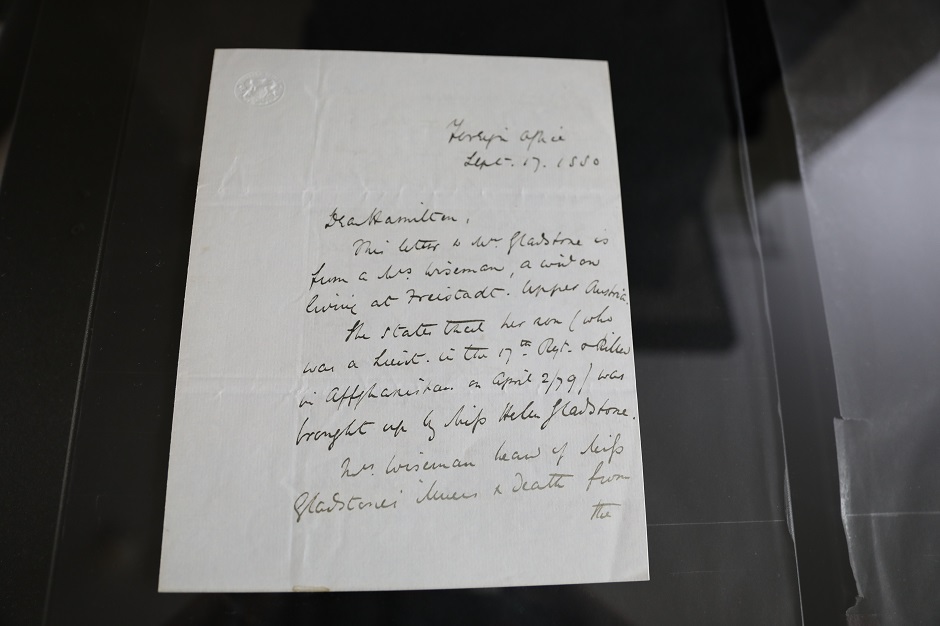 This letter to Mr. Gladstone is from a Mrs. Wiseman, a widow living at Freistadt, upper Austria.

She states that her son (who was a lieutenant in the 17th Regiment, killed in Afghanistan on April 2/79) was brought up by Mrs Helen Gladstone.

Mrs. Wiseman heard of Mrs. Gladstone’s illness and death from the latter’s housekeeper, Anna Watkins, who at the same time told her that there was a packet [?] lying at Mrs Gladstone’s bankers in London and asked for her written permission to have it opened.

This Mrs. Wiseman, who takes it to be a packet left by her son, declines [?] and as her application for the Banker’s [?] have not been authorised, she appeals to Mrs. Gladstone for the information she requires.

This is the gist of the letter, if you want a verbatim Hamilton, I will make for one.

We have had some correspondence with Mrs. Wiseman at the 70 [?] and have sent her through the Austrian Embassy her sons’ personal effects.

The above letter, sent from Henry Austin Lee at the Foreign Office to William Gladstone’s Private Secretary, Hamilton, details the contents of a letter written in German by a Mrs Wiseman to Mr Gladstone.

It has been catalogued by our Digital Gladstone volunteer team and the first line transcribed.

It will soon be available as part of our Digital Gladstone project.