After passing over letter after letter which alluded to William Gladstone’s younger sister Helen’s bad behaviour and constant poor health, I have recently come across a series of letters from William Gladstone to his brother Sir Thomas which revealed the extent to which Helen’s ailment was affecting the Gladstone family.

After consulting The Gladstone Diaries 1840-1847, I began to unravel some of the mysteries behind Helen’s persistent ‘illness’. In his diary entry of Friday 1 October 1847, William Gladstone refers to Helen as being “at her worst and but just saved from death--” following which, the decision was made to send her away to Leamington.

Although several letters had alluded to Helen’s previous flee from her family’s care, her unpredictability and behaviour which teetered on the edge of scandal, it is within his letter of November 1847 in which William Gladstone writes to Sir Thomas stating that Helen’s affiliation to the Roman Catholic Church “is itself most nearly related to the opium.” Helen’s opium addiction began to attract unwanted attention to the Gladstone family and it appears that her connection with the Catholic Church was the final straw for William Gladstone, thus prompting a heavy family intervention.

When reading these letters, it’s hard not to become invested in the Gladstone family saga and quite often I find myself turning to my colleagues in shock at the family’s debatable methods of intervention or at moving moments such as death of Gladstone’s young daughter Catherine Jessy.

Although I must admit that I have myself trawled through numerous letters. At times these are infuriating such as those concerning the new carpet within William Gladstone’s bedroom or his perpetual lamentations of the terrible weather encountered on a lengthy train journey or how he will ever transport the dressing table down to Oxford. But amongst these we have also found letters which offer a glimpse into Gladstone’s innermost private affairs and personal victories, and of which as a reader you can’t help but feel a part of.

Most notable of these moments include a series of election posters which have been fashioned into letters announcing William Gladstone’s victories in the polls; several letters addressed to family members announcing the birth of his latest healthy baby; letters which proclaim Gladstone’s disgust at the expenses scandals within parliament; as well as his several drafts and re-drafts of a letter to his father declaring his desire to pursue a political path rather than a religious life, without which we may not have been here at Gladstone’s Library reading these letters today. 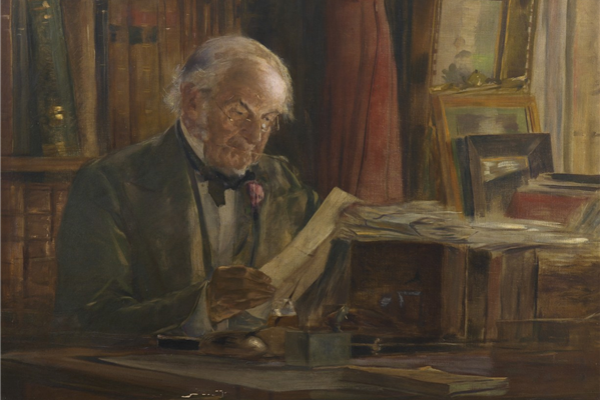