A Room of One's Own by Lesley McDowell

When Virginia Woolf wrote that every woman needed a room of her own and £500 a year, I doubt she envisaged that room being an entire library. Strictly speaking, Gladstone’s Library isn’t actually mine, of course, not even for the month I’m here as Writer-in-Residence. But I have claimed my own part of it at the end of the gallery, and I sit each day by a large window, with Tombstones of the Covenanters on one side of me and Fathers of the Victorians on the other.

Both titles would suggest rather more of a masculine space than a woman-friendly one. ‘Gladstone’s’ itself suggests patriarchy at its most Victorian. How then to explain its appeal to someone like me, who writes almost exclusively about women’s lives and looks for subversion in them wherever she can find it? It’s not that I see the act of my occupying a space in this particular library as a subversive gesture, although that’s entirely possible. What I’m doing is far more comfortable and easeful to my mind than that.

The appeal lies, for me, in a peacefully romantic Gothic structure, filled with books, and one that only feeds my imagination. ‘Romantic’ gets a bad name when it’s attached to women – somehow it’s only taken seriously when applied to Byron, Keats and Shelley. But I like to think I’m reclaiming the word a little when I sit in this romantic space and work hard, apply myself, think through difficult problems that I’ve constructed on my own.

To speak of ‘emotional connections’ is also to risk being taken less seriously, especially when it’s a phrase used in connection with women’s spaces or women’s needs. But I’m going to do that anyway. I don’t know precisely what Gladstone had in mind when he thought of ‘his’ library, but it is a loved space, and a warm and welcoming space. The gallery looks down on to an open floor but there are nooks and crannies where you can hide yourself away, if that’s what you want. You can see and be seen, as the Wife of Bath once commented. Or not.

It is impossible to sit here and not wonder who else has occupied this space before you, and what they might have gleaned from it, what books they have found, what ideas they have generated. I like to think of an alternative kind of continuity taking place in the midst of these Victorian Fathers lining the shelves: one of women finding a corner to study in peace away from the demands of their careers or the demands of their families. Jane Austen had a desk in a family room that meant covering up her work whenever anybody entered, as they would surely want her attention. Two hundred years later, incredibly, women still experience that same demand, and that same need to sit in the quiet, to know that they will be undisturbed while they write. And so, when I leave here, I will take a little of Gladstone’s Library with me, and recreate that sense of a fruitful, quiet space at home, now that I know how valuable it is, and I will protect it from interruption. I’m sure the Victorian Fathers would understand. 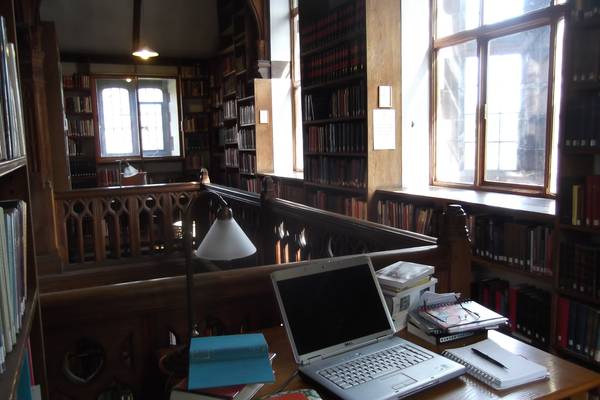 'A desk of one's own', Lesley McDowell's seat in the Library