A 'Queen of the Left Hand of England' by Muriel Maufroy 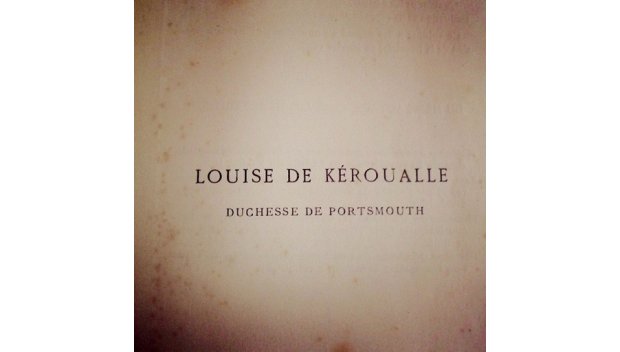 You never know what you might discover when looking through the shelves of Gladstone’s Library. In the room which contains the whole collection of the books Gladstone originally donated – over 30,000 volumes – three of them, one in English, the other two in French, attracted my attention. Perhaps because, instead of dealing with big names such as Samuel Pepys, Robert Pitt, or Lord Shaftsbury, they focused on a certain Louise de Keroualle, Duchess of Portsmouth, whose name, I admit, meant nothing to me. Who was she? Why would Gladstone have been interested in her?

For a start, Gladstone loved France and spoke French fluently, and though there is no reason to believe that he was not a faithful husband, he liked the company of women. That may be reason enough. Louise de Keroualle was not only a beautiful woman; she was also deeply involved in politics during the seventeenth century, when France and England competed for power in Europe. So there we are.

Louise came from Brittany, where she was born, and, depending on who recounts her story, she possessed ‘a cold-blooded astuteness’ was ‘a woman who planned betrayal while bewitching with her caresses’ or ‘a charming ambassadress who was brought to the English court to represent the ideas, the habits, the fashions and the interests of France.’ From the English point of view, it seems that ‘the interests of France’ were a little too close to Louise’s heart. For example, it is no secret that she was in constant correspondence with Mme de Montespan (Louis XIV ‘mistress) from whom she received instructions, and this at a time when ‘Charles II kept promising to sign an alliance with France against Europe, but was always ready to sign an alliance with the Netherlands against France.’ No wonder that this young, beautiful and intelligent woman was at the centre not only of the passions of the time but of a net of political intrigues between the French and the English, or rather Louis XIV and Charles II.

Louise may well have been in Charles II’s bed, but she was at the same time under Louis XIV’s thumb. That makes, no doubt, for an interesting life and an interesting read for whoever ventures into Gladstone’s Library in search of knowledge as well as entertainment.

Louise de Keroualle, Duchess of Portsmouth – Society in the Court of Charles II (Compiled from State papers preserved in the Archives of the French Foreign Office)