“There is no career more exciting or exacting than marriage to a great man. Without Catherine, William Gladstone’s life would have been comfortless and unhappy.” Such is the way, Georgina Battiscombe, the author of this biography of Mrs Gladstone, chooses to begin her book. One cannot help wondering: And did Mr Gladstone’s wife feel comfortable and happy? But this is a question that belongs to our twenty-first century. Today many women would no doubt cringe at this other statement by the author: “In her own right, she (Mrs Gladstone) deserves remembrance, but she is chiefly important as affording a new means of approach to the somewhat baffling and distant figure of Gladstone.”

As to its attraction, I would say that, at times, the book is reminiscent of Jane Austen but will also appeal to a more modern audience, those, for example, addicted to their weekly dose of Downton Abbey where the personal and the historical are cleverly mixed. This sentence, “1870 was a golden year of private happiness and political achievement,” summarises this well. And it is interesting to learn that “Undoubtedly, her (Catherine Gladstone’s) influence helped to keep him (William Gladstone) in politics long after his personal inclination would have taken him into retirement,” and, “Her husband would sometimes listen to her when he would listen to no one else.”

The flavour definitely belongs to the nineteenth century, and we find ourselves back to a time when the relationship between men and women took months if not years to flourish; at the same time, we follow the political events of the days. We also enter into the intricacies of family alliances in which finance, politics and one’s place on the social ladder play an essential role. But have things changed that much today? We like to pretend that we have become a more egalitarian society. But have we?

In the end, the book goes much farther than just recounting the life of Gladstone’s wife. The author willingly admits that in describing Catherine Gladstone, she has ended up describing two exceptional beings, Catherine and William Gladstone. What is particularly attractive is that she brings their characters to the fore through a multitude of lively anecdotes. She also offers arresting comments, for instance: “that elementary lesson for the wife of a man of genius, the realisation that although she might have first claim on his heart, she could never have first claim on his attention.” or “the happiness of old age is inevitably brief,” all remarks no less valid today, and because of that, making this book highly readable. 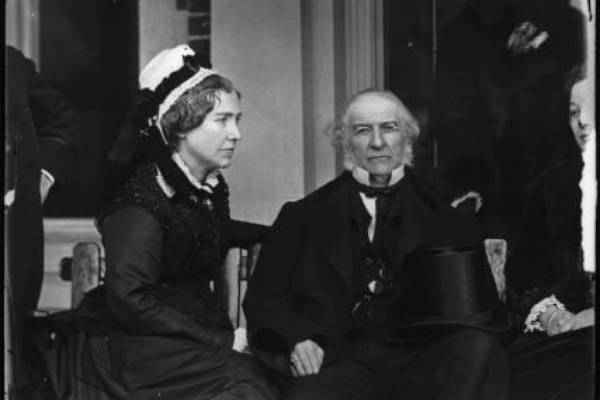