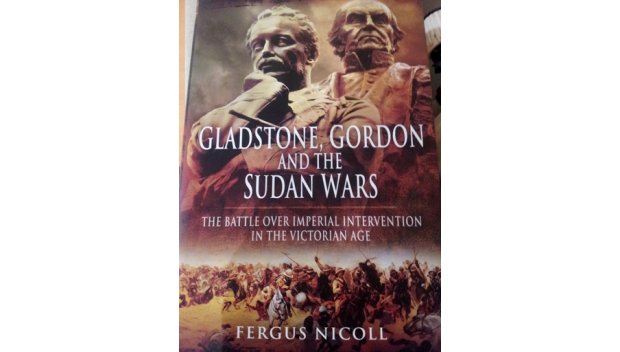 To accept that our views on historical matters need examination and possibly re-evaluation is certainly a challenge, but a rewarding one. This is exactly what Fergus Nicoll’s book, Gladstone, Gordon and the Sudan Wars, just published by Pen & Sword Military, offers its readers. Such a book reminds us that history is not written once and for all but never ceases to evolve, partly because our perception of the past changes with time, and partly because of previously unpublished material coming to light.

For those of us who don’t know much about the Sudan wars – and I would think there are more than a few – this book is a great reminder of events which still impact on our time. In it, we learn how Britain found itself involved in two successive wars in the Sudan while opinions at the highest level were divided about Britain getting militarily engaged abroad: on one hand those who favoured intervention, on the other those who were against military-involvement. That these opinions were embodied in two men, both of enormous stature, General Gordon and William Gladstone, then Prime Minister, gives Nicoll’s book all its weight.

The book is also particularly successful in bringing to light the intricacies of politics that led Gladstone to compromise on his principles of non-engagement, and in showing how the pressure of politics, the press and public opinion distorted and misinterpreted his decisions as wells as his intentions.

This is a book too rich to be summarized in a few paragraphs, but there is no doubt that any reader interested or involved in modern politics will find much to reflect upon in this book. For whilst reading about the wars that took place between 1884-and 1886, in which Gordon lost his life, and Gladstone some of his reputation, one cannot help thinking of more recent conflicts such as the war in Iraq or the intervention of the western powers in Libya, and now, of course, of the current debate concerning the role of the international community in Syria.

History tends to repeat itself and in the same way that opinions differed about the Sudan, they still differ now when it comes to view the role of Britain in the world. For, even though Britain has lost its empire and Gladstone’s liberal ideas have largely spread, in some quarters the spirit of the empire still endures and the conflict of opinions Nicoll underlines in his book is far from gone. That our politicians can learn from this work is not certain, but they will certainly find some vindication to their actions when finding themselves, like Gladstone with the Sudan, in the position to adopt the very policies they originally fought against. A consolation at a time when trust in politicians is in serious demand.

Gladstone, Gordon and the Sudan Wars can be found at Gladstone's Library.