At Gladstone's Library for World Book Day 2014 by Phillip Clement

Since 1997 World Book Day has captured the minds of adults and children across the globe, its main aim in the UK and Ireland being to encourage children to explore the pleasures of books and reading by providing them with the opportunity to have a book of their own. At Gladstone’s Library every day is book appreciation day, but we couldn’t just let today slip away without doing something to show the world exactly how much we love books.

We thought that a nice way of doing this would be to tell you about our favourite books from Gladstone’s Library collection (all of these books and more can be found here so you can have a go at this yourself) and read all them to you at the same time. The books we chose were:

Louisa Yates: George Owell’s: 1984: ‘I love it because it was written with clear political intent – but doesn’t feel like it; has a large explanatory afterword explaining the principles of Newspeak – which Orwell didn’t need to do; and because the prose is economic but evocative.

Phillip Clement: Richard Harris Barham: The Inglodsby Legends: ‘I’ve always been enchanted by the hand-drawn and coloured illustrations – my favourite is the one of a skeleton putting on his trousers.’

Gary Butler: Richard de Bruy’s Philobiblon: ‘This edition of one of the earliest books-about-books is number 134 of 500 copies. It contains many wise words on the value of books that are as true now as they were when written in the 14th century.

Jane Dawson: Dante Alighieri’s Inferno: ‘Because it’s the story of my life.’

Irene Marín: Handbook for Travellers in Spain: ‘I love travel books, geography and cartography. This one was printed in 1869 and [being Spanish myself] I like to see how Spain was shown to English people.

So here it is, the eclectic masterpiece from Messer’s Orwell, Barham, de Bruy, Dante, Woolf, Brontë:

“It was a bright cold day in April, and the clocks were striking thirteen. They were cleverly “built,” of a light grey mixture, a broad stripe of the most vivid scarlet traversing each seam in a perpendicular direction from hip to ankle, - in short, the regimental costume of the Royal Bombay Fencibles. How highly we must estimate the wondrous power of books, since through them we survey the utmost bounds of the world and time. Unceasing was the play of wretched hands, now this, now that way glancing, to shake off the heat, still falling fresh. For Love, to which we may now return, has two faces; one white, the other black; two bodies; one smooth, the other hairy. It has two hands, two feet, two tails, two, indeed of every member and each one is the exact opposite of each other. Molins de Rey Stat. Population 3000. Here is a beautiful bridge across the Llobregat of 15 arches. A tunnel is now passed through and afterward the old Castillo de Papiol is seen perched on a hill, part of the economy drive for Hate Week.

Personally, I can't wait to find out how that one ends. 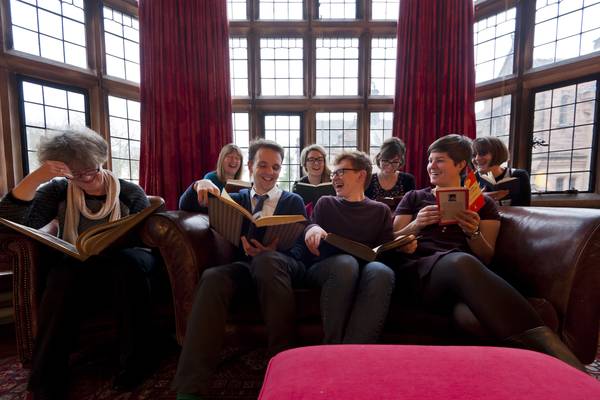 What are your favourite books? Why not comment below, we’d love to hear.