Gladstone's Library: The Meaningful and the Magical by Peter Moore

The poet Phillip Larkin once wrote that all manuscripts have two kinds of value, what he termed the meaningful and the magical. The meaningful was the mere information – the words or the pictures that you could absorb. But beyond this meaningful analysis was the magical. The thrill of holding letters written by Nelson or Shelley, notebooks kept by Orwell or Hooke. What you feel when you pick these up is something that goes beyond the simple act of holding and reading and enjoying. It is the magical.

Gladstone’s Library is full of magic. I have been here for twenty days, tapping at my keyboard in the library’s history room. The history room is filled with thirty two thousands of Gladstone’s own books, twenty two or so thousand of them he read himself. It is a peculiar thought - so much interaction in such a small space. You look at the shelves and you know the books are not there for show. They are Gladstone’s intellectual lifeblood, and perhaps one of his greatest liberal acts was to bequeath them to the nation.

In about eleven thousand of these books up you can find his pencil at work in the margins. He draws lines beside passages, scrawls dates here and there and marks great X’s when something catches his eye. Occasionally there will be an outburst ‘No!’ or a spelling correction, but Gladstone rarely elaborates or extends himself to more than a word or two.

It is enough, though, to leave you wondering as his voice echoes out of the nineteenth century. This is the magic that Larkin was talking about. At times you feel like you are eavesdropping on a conversation between Gladstone and the author. You wonder where he was when he read the book? You wonder if he bought it? You wonder whether this is one of the books that the piled up into a wheelbarrow at the age of eighty-something and carted over to the library from Hawarden Castle (which is just up the road).

Gladstone was such an effective orator he often left his audiences mesmerised. A verb sprung up to explain this sensation. It was to be “Gladstonised” - to temporarily lose the capacity of individual thought.

Through his annotations the books in the History Room seem to be somewhat Gladstonised too. It is as if they – and they are on all subjects from Peel’s speeches, to the divorce of Catherine of Aragon –are charged up with his own alpha personality. As a writer you can revel in the magic.

Thinking about his reminds me of something Richard Holmes wrote in his book, Footsteps:

The past does retain a physical presence for the biographer – in landscapes, buildings, photographs, and above all the actual trace of handwriting on original letters or journals. Anything a hand has touched is for some reason peculiarly charged with personality – Thomas Hardy’s simple, steel-tipped pens, each carved with a novel’s name; Shelley’s guitar, presented to Jane Williams; Balzac’s blue china coffee pot, with its spirit heater, used through the long nights…’ other writer’s signet rings, Coleridge’s annotated books… It’s as if the act of repeated touching, especially in the process of daily work or creation, imports a personal virtue to an inanimate object, gives it a fetishistic power in the anthropological sense, which is peculiarly impervious to the passage of time.

And here’s the magic draw of Gladstone’s Library. Most of the objects that Richard Holmes lists here are private possessions. Just try getting your hands on Shelley’s guitar or Balzac’s blue china coffee pot or Coleridge’s annotated notebooks. You might get in a minute’s supervised access to them with white gloves if you’re lucky. But here at Gladstone’s Library all of these books, annotated, beautifully bound, faded, stiffened and creaking are here just on the shelves, ready to be opened again. 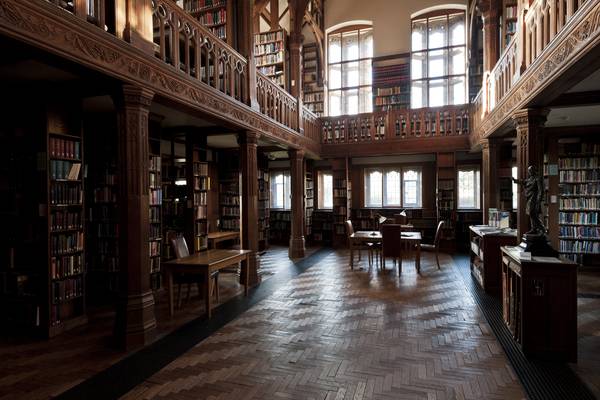