Four Months Away by Irene Marin

Leaving in mid-January, after two weeks in the pretty and green Llangollen, a girl from Barcelona arrives in the tiny town of Hawarden, North Wales. She carries a huge suitcase, complete with all the warm clothes she could fit, a laptop, some books and all the excitement of her first ‘long stay’ for 14 weeks abroad from her country. Though she doesn’t know it yet, she (and her French housemate) will be living in the home of a lovely local landlady.

On Monday 3 February, she arrives, for the first time, at Gladstone’s Library. She’s an Art Historian and is on an internship intended to improve her English and provide her with the tools she needs to enrich her skillset. She’s got her doubts, especially when she thinks about how this work experience relates to her degree in Art History. But she’s open-minded and remains positive, because she knows whatever the experience brings, it sure to be enriching.

On the first day she’s introduced to the staff working in the office, as well as the enthusiastic volunteers and the kitchen staff (who she quickly learns are lovely) The first thing she thinks is how difficult will be to understand them all; they speak English so quickly(and she thought her English was ‘good’…).

So, there she is, ready to begin. Surrounded by the magical sights offered in this unconventional library filled with old and new books, and its characteristic and evocative smell which she loves (when she’s got a book in her hands, the first thing she does is smell it).In the first few weeks she is introduced to the operating systems at Gladstone’s library and the cataloguing process, checking that the correct books were on the correct shelves along with all the other ‘stock’ librarian tasks. But, as she knew, this wasn’t a typical library and the work didn’t finish there.

Soon she was invited to take part in the daunting task of reading and documenting the manuscript letters of William E. Gladstone, which she found enriching as she could use primary sources to research historic and political contexts and other social affairs she was familiar with. She even discovered an exciting letter in which Gladstone, visiting Italy, told his brother, Thomas, about all the buildings, art galleries and monuments he had visited in Florence, providing his own critical view of the landscape.

Then, she started another exciting task: searching for books written in Spanish or Catalan. She found nearly thirty different volumes in the collection, most of them in Spanish. The most interesting books were a biography of Philip II of Spain, published in 1619, and a Chronicle of the Moors in Spain, dated 1618. She also found an historic book which contained a text, written in Valencian, in which the Spanish argued their expulsion of the Moorish. These were all bound in leather and each boasted examples characteristic features of early printing; each of them a first edition
Books are treated as works of art here and must be documented, preserved and disseminated as a record of our past; it is important that both the contents of the book and the book as object itself must be studied.

She’s still at the library, enjoying and learning as much as she can. She is now certain that when she leaves, she will take her lovely experience of Gladstone’s Library with her, like so many other readers, writers and residents do. 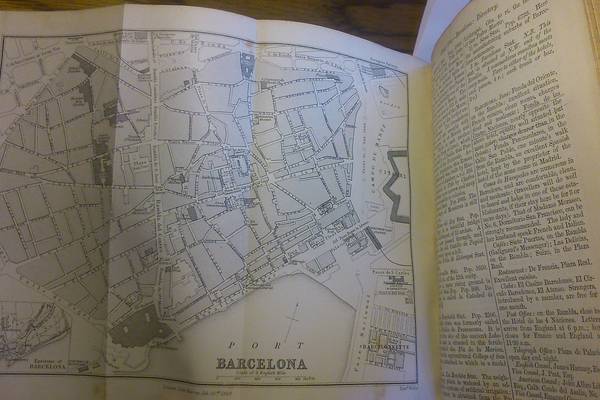