Every self-respecting historical institution over a certain age ought to be able to claim ownership of a buried treasure or two. Gladstone’s Library of course houses a large number of unique treasures – thirty thousand of Sir William Gladstone’s own books, gathered together in one room, many of which contain his personal annotations and indexes. These are only the surface treasures however – dig deeper and you may unearth an altogether different gem.

With this in mind it is time to unveil the Library’s ‘Treasures’ project. Over the next few months, staff at the library will be compiling a booklet to showcase some of our lesser known artefacts.

Sleuthing, it must be said, is not an occupation I’ve previously been known for. Find me a person, though, who has never held the fantasy of donning a deer- stalker and following a trail of clues. So it was, with a certain childish pleasure, finding myself the entrusted person to carry the project out, that I sealed myself away in Closed Access with a list of items for possible inclusion, handily put together some time before I came to the library.

Digging through our collection of pre-1800 books and manuscripts it wasn’t too long before I found my favourite item – a first edition of The Paraphrase of Erasumus upon the Ghospell of S. John / translated into the vulgare toungue by the moste noble Princesse Marie. Published in 1548, written by Mary Tudor and dedicated to her mother, Catherine of Aragon, here was the first ‘treasure’ to be included in the finished project. As for the other treasures, these shall be kept under wraps until the project is complete – or at least until the next Treasures-related blog post. I can say though, that they include items ranging in date from the first century to the 1800s, and will also include some of the oddities and peculiarities from Sir William Gladstone’s own books. And I suppose there’s no harm in leaving a few clue words to whet the imagination: Mummies; Mint; Bull; Armenia.

The aim is for this project to reach publication early next year. Photographing is underway, and further research into each individual item will soon begin. In the meantime I leave you with a picture of a relic which will certainly be making it to the final cut. What, exactly, is it? You shall have to wait to find out… 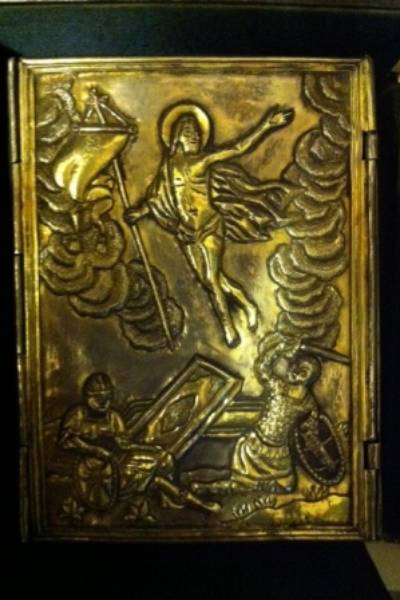