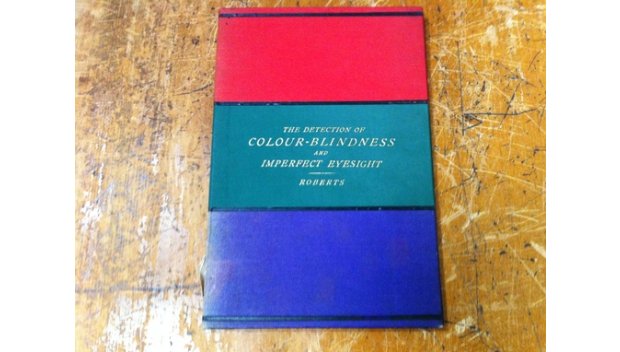 The range of subjects Gladstone was interested in never ceases to astonish me. Whilst in Gladstone’s Library, I recently stumbled upon a little thin book with an unusual cover – three horizontal bands of red green and blue – that deals with The Detection of Colour-Blindness and Imperfect Eyesight and was published in 1884. It belonged to the great man whose sight, it is known, was poor.

This book essentially consists of a test, aiming to check the sight of children, after ‘the unnecessary publication in Germany of observations on ‘the deteriorating influences of school and college life on the eye-sight of children.’ This is why, at the end of it, one can find a table of coloured wools organised in ten rows, designed for an eye test. Amazingly, the colours have not faded with time, perhaps because the author of the book warns the reader ‘not to expose it unnecessarily to the light and not to touch the wool with the fingers’, advice that obviously Gladstone complied with.

The first line of wool contains the primary and secondary colours. Line two is filled with one colour – red, in various shades, and line eight is filled with shades of green. The other seven rows show one colour, each with its ‘confusion-colours characteristic of colour-blindness.’ The test asks the person whether he/she can see all the colours as described for each line. If the person states that two lines have one colour and dismisses the rest as mixed, his sight is considered good. The results show, essentially, three types of people: those who can see correctly, those who are not quite sure about colours and those who are definitely colour-blind.

However, as one can imagine, there are nuances between the various people being tested. According to this book, the average sight of the country’s population is little better than that of the towns! As for the influence of school life on the eyesight, the conclusions are unclear. Apparently colour-blindness was more common in Germany than in England, and was twice as frequent amongst artisans as amongst the well-educated classes. Significantly, all the tests and measurements that were made only concern the male population; women’s sight at the time was apparently not worth inquiring.

In conclusion, unsurprisingly it appears that, the perception of colours vary significantly from one individual to another. When it comes to define colour-blindness the book is more explicit: colour-blindness can only be said to exist, if decidedly green, red, brown, or grey cannot be separated; or when decidedly blue, violet or purple colours are not distinguished from yellow and grey. However, there are different sorts of colour-blindness: one affecting only one colour, red or green.

The most interesting conclusion is perhaps that ‘Much of the confusion which exists with regard to colours, is due to ignorance of their names and their relations to each other, and can be removed by a proper education of the colour-sense. This, however, has nothing to do with colour blindness but everything to do with the importance of art classes. The French talk of ‘La Vie en Rose’. Can art classes help those who only see the world in shades of brown and grey, see ‘Life in Pink’? The question is worth asking.

The Detection of Colour-Blindness and Imperfect Eyesight can be found at Gladstone's Library.