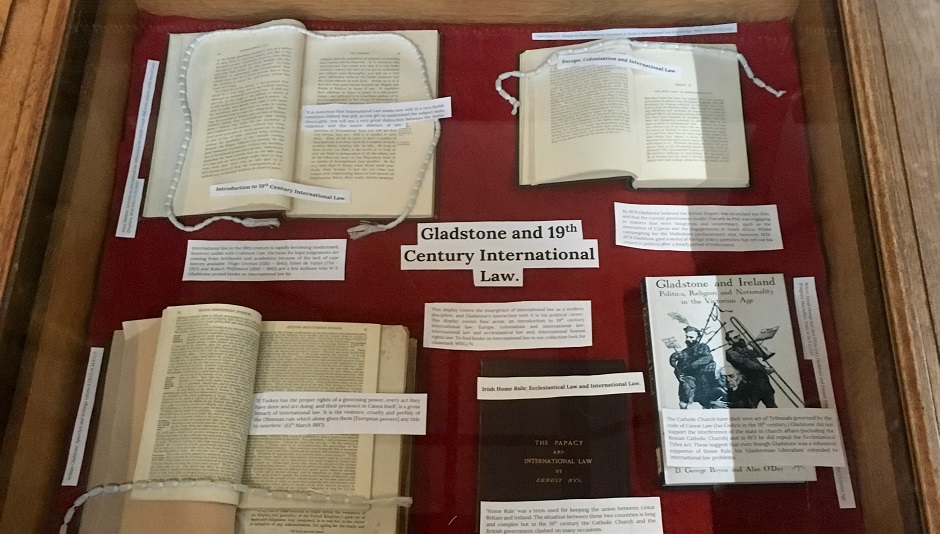 This month’s display in our History Room focuses around William Gladstone and nineteenth-century international law. This is a large topic and this blog aims to add some extra details that unfortunately wouldn’t fit into the cabinet! The display mainly draws inspiration and reference from our Gladstone Foundation Collection, the books owned by William Gladstone and housed in our History Room. Gladstone owned a number of books on international law, ranging from those written by Emer De Vattel, originally published  1759 – 1760, to a series of lectures given by Sheldon Amos to the students of Middle Temple Hall in 1874.

‘The Law of Nations’ becomes the law that is equally observed by all people and civil law is what each nation has established for themselves.’ [1]

Fast forward almost a century and Sheldon Amos is leading a series of lectures at Middle Temple Hall, to the students of the Inns of Court in London. Amos is a barrister and professor at University College London and manages to cover the entirety of Vattel’s ‘Law of Nations’ in his first two lectures, taking up a total of 32 pages. Amos then spends the next five lectures discussing modern international law, with lectures on private international law, duties of states as well as discussing the present challenges with international law such as its feeble nature.

‘It is notorious that International Law exists now only in a very feeble condition indeed, but still, as you get to understand the subject more thoroughly, you will see a very great distinction between the feeble existence and the entire absence of law.’  [2]

Both these books were owned and read by Gladstone, and this shift in knowledge and understanding occurred throughout his lifetime. With his political work and the issues he faced as Prime Minister there was no way he could remain uninvolved with nineteenth-century international law.

Now we have a bit of background information, the rest of the blog will give you an insight into three areas where Gladstone crossed paths with international law and what went on when he did.

The 19th Century saw an emphasis on international relations, law and politics in Europe. With colonialism still present and active, especially with events such as the ‘taking place, this meant that the European powers had to be vigilant towards one another. Alongside this, the Concert of Europe and the unification of Germany and Italy in the latter half of the 19th Century shifted the balance of power in continental Europe. Gladstone believed that the British Empire was stretched too thin and he showed his distain  of Disraeli’s foreign policy ideas in a series of speeches known as the ‘Midlothian Campaign.’

‘...Since that time [1874] I make the complaint that the shoulders, so to speak, of this nation have been loaded by a multitude of gratuitous, mischievous, and dangerous engagements. I point to Africa, I point to India, I point to Afghanistan, to Syria to Asia Minor, to the whole of Turkey in Asia, I point to this assumption practically, and in an alliance with France, most critical in its nature, our assumption of the virtual government of Egypt; I point to our practical annexation of the island of Cyprus...In fact, I point to the enormous increase of difficulty and labour all over the world and I challenge it.’

Of course, Gladstone could not completely get away from Disraeli’s jingoism especially in regard to Egypt. Britain’s involvement in Egypt rose exponentially from the financial crash in 1875 which led Egypt to sell their shares in the Suez Canal to Disraeli’s conservative government, to Gladstone unenthusiastically invading Egypt in 1882. However, Gladstone still strongly denounced Disraeli’s Jingoistic foreign policy and stated that;

‘I wish to announce that we cannot undertake to do any act inconsistent with the acknowledgment, indubitable and sacred in our eyes, and that the canal has been made for the benefit of all nations at large, and that the rights connected with it are matters of common European interest.’

An important message for international law and politics as legally, the sovereignty over the territory through which the canal runs was split between the Khedive (Egypt) and the Sultan (Ottoman Empire). But in reality, the British government exercised much more control over the area.

Gladstone was also heavily involved in nineteenth-century Irish Home Rule debates and spent many occasions discussing Irish issues in parliament. Gladstone was on board with the idea that Irish politicians would manage Irish affairs, the controversial issues for Gladstone as Prime Minister related to the unity of the British Empire and the supremacy of the British parliament.

‘The two points that remain [in controversy] are, one on the side of Great Britain – the unity of the Empire and the supremacy of parliament; the other on the side of Ireland, the measure of what we term Home Rule - that is to say, the management of strictly Irish affairs by strictly Irish authority, shall be real and effective, and shall be accepted…by the Irish Nation.’

The Catholic Church have their own set of Tribunals governed by the code of Canon Law (‘Jus Codicis’ in the 19th Century.) Gladstone did not support the interference of the state in church affairs (including the Roman Catholic Church) and in 1871 he did repeal the Ecclesiastical Titles Act. These suggest that even though Gladstone was a vehement supporter of Home Rule, his ‘Gladstonian Liberalism’ extended to international law problems.

Gladstone had thought his third term as Prime Minister would be his last, however his brief stint into retirement was cut short by what became known as ‘The Eastern Crisis.’ This refers to a series of crimes committed by the Ottoman Empire to Armenian and Bulgarian Christians. Disraeli and Gladstone clashed because of Disraeli’s distrust of other European powers whereas Gladstone believed that if Britain worked with Europe they were more likely to achieve a better outcome. His stance on this issue had three main effects: completing the estrangement between him and Disraeli (and Queen Victoria); it made it impossible for Disraeli to go to war with the Ottoman Empire; and it encouraged the consideration of moral values as a part of international law and policy.

‘If Turkey has the proper rights of a governing power, every act they have done and are doing, and their presence in Canea itself, is a gross breach of international law. It is the violence, cruelty and perfidy of the Ottoman rule which alone gives them [European powers] any title to interfere.’

Gladstone’s stance on this issue had three main effects: completing the estrangement between him and Disraeli (and Queen Victoria); it made it impossible for Disraeli to go to war with the Ottoman Empire; and it encouraged the consideration of moral values as a part of international law and policy. In fact, the Armenian victims of these crimes against humanity recognised Gladstone’s work on behalf of them and laid a silver wreath on his tomb at Westminster Abbey on the centenary of his birth in 1909. We now hold this wreath in our Theology Room here at Gladstone’s Library.

This crisis also saw the first instance of British humanitarian aid being sent out during the Russo-Turkish war of 1877-1878 in the middle of the Eastern Crisis. The aid went both to the Russians and the Ottomans, a surprising initiative considering the well-known bias against ‘the Turks.’ [3]

In hindsight it is unsurprising really considering all we know about the man himself that he found himself engaging with the modernisation of international law. International law is a discipline that is forever adapting and evolving to meet the current demands of our world, and the 19th Century is a good example of the beginning of this.

So, armed with all of this new information, come and view our March display! It will be up for the whole month and fully viewable in the History Room. If you are a Reader, ReaderPLUS or resident then you will be able to see it when using the library. If you are a member of the public then we run free daily Glimpses into the library at 12pm, 2pm and 4pm which last around 15 minutes and are the only time non-members can come into the library and view the display.

If you are interested in international law or Gladstone’s views and books on the subject, these can be found in our collection under the classmark WEG/N and even some in our Closed Access storage.