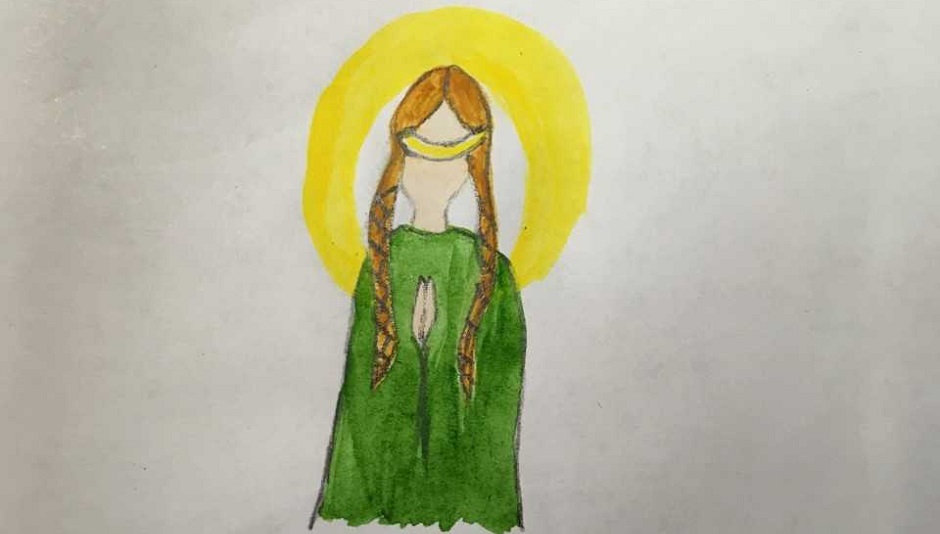 From your chance; with its blazing waxen candles

Well does your golden image know

How to assuage the griefs of wretched men.

What man soever would keep vigil in your choir

('a holy shining pilgrimmage), you with Indeg's radiance,

There is no sickness not heart's sorrow

Which he would carry with him thence from Llanddwyn'*

St. Dwynwen is Wales’ patron saint of love and Dydd Santes Dwynwen is the Welsh equivalent of St. Valentine’s Day. Dwynwen (meaning ‘she who lives a blessed life’) was a 4th / 5th-century princess and one of King Brychan Brycheiniog’s 24 daughters. She fell in love with a young man called Maelon Dafodrill, but King Brychan had already arranged for her to marry someone else. Maelon was distraught and Dwynwen fled to the woods where she prayed and asked for God to help her. As Dwynwen wept, an angel appeared and gave her a potion that would make her forget about Maelon, and he was turned into a block of ice.

Dwynwen was granted three wishes by God. Her first wish was that Maelon be thawed. Her second wish was that God help all true lovers. And her third wish was that she should never marry. In gratitude, Dwynwen became a nun and founded a convent on Llanddwyn Island off the west coast of Anglesey, where a well named after her became a place of pilgrimage after her death in 465AD.

It was said that the sacred fish or eels that lived in the well could foretell whether love and happiness would be theirs. The remains of Dwynwen’s church can still be seen today. There’s also ‘Crochan Llanddwyn’ (Llanddwyn’s ‘cauldron’); a small wishing well inside a rabbit warren between Llanddwyn Island and Newborough beach. According to folklore, if the water of the well boils while pilgrims are present, love and fortune will follow.

St. Dwynwen is also considered the patron of sick animals. A few years ago, a group of Denbighshire farmers celebrated Santes Dwynwen’s Day by transforming their milk bottles into lonely heart advertisements. They attached pictures of themselves to them with a message inviting people to ‘Fancy a Farmer’! It remains a mystery as to whether Santes Dwynwen’s magic was able to help these plucky farmers get a date.

St. Dwynwen’s most famous saying is ‘Nothing wins hearts like cheerfulness.’ Have you seen our vast and distinct collection of books on Welsh saints and folklore here at Gladstone’s Library?