Theologian in Residence: Justin Lewis-Anthony reflects on his longest visit yet.

Theologian in Residence: Justin Lewis-Anthony reflects on his longest visit yet. 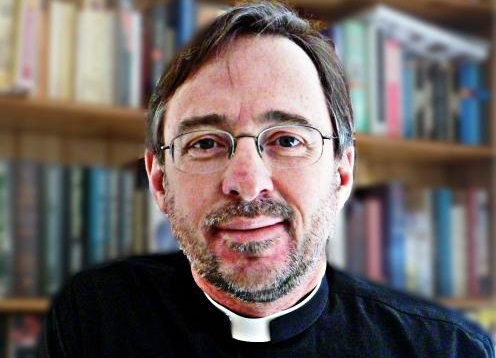 The Rev. Justin Lewis-Anthony, Ph. D., is currently the Associate Dean of Students and Director of Anglican Studies at Virginia Theological Seminary, where he joined in August 2013. He is also a regular contributor on church and state matters for The Guardian newspaper.

Justin joined us as a resident at Gladstone’s Library for much of the month of June; here he discusses with intern Catherine his motivation for doing so and what his time in the Library has afforded him. In particular, Justin reflects on the changes he has observed at the Library during the course of his 20-year association with it.

I’ve been here for the month of June, which in the end turned out to be about 24 or 25 days, and that’s the longest I’ve ever been here at any one time. Before, whenever I’ve come to Gladstone’s it’s always been in two- or three-day chunks. The funny thing is that when I’ve come here before I’ve always come with a car, and I never wanted to go and see any of the countryside around here, because I had to be in the Library. This time, I have had a lot more time, and I haven’t got a car!

The great thing is that I’ve been focussed really on the Library; I taught one course, which meant I had about four days off in the middle of [the month] where I wasn’t writing, but this afternoon I broke the 30,000 word barrier. So, I’ve written 30,000 words in 17 days - and that’s because of the atmosphere here.

I’ve been coming to Gladstone’s since just after [present Warden] Peter Francis arrived here, so that was…1997. So I’ve been coming for close to 20 years [and] I’ve seen quite a few changes in the place. It was still very monastic when I first arrived; we didn’t have Roberts radios in the bedrooms, there weren’t any en-suite rooms and at mealtimes the bell would ring and you would all sit down and eat together. It felt very much like being back at high-school. So, the trappings of Gladstone’s have changed a huge amount, but the heart of it – the quietness of the Library, the resources of the Library, and the scholarly atmosphere – that’s still there, and it’s one of my favourite places on earth, it really is.

How did you first discover it, all those years ago?

When I was at university my chaplain kept on saying, “There’s this place called St Deiniol’s [the pre-2009 name for Gladstone’s Library] in North Wales and it’s always a nice place to go.”  I think he’d been a couple of times because he was originally from Liverpool, so he wasn’t that far away. I never came whilst I was a student, and then when I was at theological college I didn’t need to because I was at theological college, and it was after four or five years of being ordained and realising that if I wasn’t going to exercise my brain I was going to die and kill myself at the same time I thought, ‘Where can I go where I can actually get away to renew and refresh and recreate?’ Then I remembered what my chaplain said about St Deiniol’s. So, it was that – it was a recommendation through my university’s chaplaincy.

Which particular aspects of Gladstone’s Library would you highlight as the main conducive factors for your work and study?

Well, there’s no washing up! I’ve always said that to people. It’s just such a luxury to be able to have all your meals done for you, and then to have somebody else do the washing up. That’s a very flippant way of saying it’s just such a friendly place. Being here for a month this time – as well as when I’ve been here for two days before – you feel that, while it’s a community that’s here all year round, you are immediately a part of it. I find that really helpful for thinking and reading and writing: realising that I’m not either competing with anybody else or completely isolated. It’s that community that you become part of, even for a short time.

Being here for a longer spell this time around, have you found that you’ve developed any particular rhythms, and habits? Do you have, for example, a favourite place to work in the Library?

My favourite place to work in the Library is up in the Theology Room gallery, for some reason with my back to the morning light, which means it’s very bright [and] I can’t always see my computer screen. I don’t know why I do that, but it’s just such a lovely place to be up there! I think the only habit I’ve developed is that I look at my watch and think, ‘My goodness, where did those three hours go?’ That’s the only one. Especially for the first two weeks that I was here, it seemed to be like a flash and a blink before it was ten o’clock [pm] and the lights were being turned out and I was going back to my room. I’d be thinking, ‘Where did that whole day go?” It just got swallowed up by reading so much and thinking so much.

Do you find that, having a bit more flexibility now [compared with the earlier ‘monasticism’], you were able to determine your own working ‘rhythm’?

Having the luxury of being here for a whole month meant that I was able to work out that rhythm. But, to be honest, the rhythm was basically, ‘Shall I have a cup of tea now? No, I’ll keep on pressing forwards because I’m on a bit of a roll…’ So I couldn’t say, “Well, I had breakfast at 8 o’clock, was in the Library by 8.30, had a cup of tea at 10:30, lunch at 12 minutes past 12, and so on.” The most important part of the rhythm is exactly how focussed the day is here.

Do you find that that is very much different from how it would be when you’re working back at home?

The last book I wrote, I wrote in 15-minute bursts. I’d put the pasta on to boil, and I’d go back to my desk and I’d write for another ten minutes. That’s one way of working, and a very necessary way of working when you’ve got family in the house and you’re working full-time. So I was very pleased when I had all this time when I didn’t have any other pressing appointments, so that I was actually able to churn out the words and be able to read through the pages. Sometimes you find that if you’ve got hours and hours and hours to work then it’s only in the last 20 minutes that you actually do anything productive. It’s like sleeping: the only amount of sleep anybody ever needs is ‘just another 10 minutes’. The only amount of time I ever need in the Library is just the last hour…again! But this time around, to be able to do 30,000 words in 17 days – there must be some kind of system that I came across.

Has anything surprised you about your time here, or perhaps previous visits?

I think being here for a longer period of time means you actually get to see the ‘outsiders’ [non-residents] coming in more. I’ve been more aware of the outsiders and how much the Library as an institution has been opened up to people outside, [more] than it was before. Sometimes it felt a bit like seeing those special effects, where you’ve got someone standing in the middle of a very crowded city street, and everybody [around] is speeded up and the one at the centre is the only still person.

When I was here for two or three days at a time, I was one of those outsiders – people who were coming in, doing a particular project, having a particular meeting, doing a particular course, and then leaving again. And seeing [the influx of non-residents] - that’s a real change, and a real change for the positive, seeing how much wider a catchment the Library has than it used to. Before it was rather tweedy clergymen who would come and read rather tweedy books - that would be about it. Now there are all sorts of people here, and some of them are here just for Afternoon Tea and some of them are here for reading the newspapers. And that’s a really nice thing.

On the subject of books, have you been making use of the Library’s collections? I know the answer to that as I’ve seen the slips with your name on!

I think there’s only one bit of the collection from which I didn’t get a book out, and that was the rare manuscripts section – and even there I managed to get inside and talk to the Library Assistant one day when the door was open. Every other part of the Library I’ve actually made use of.

Today I was doing some work on Aristotle’s Rhetoric and I thought, ‘I wonder what Gladstone had to say about that?’ Gladstone had three editions of the Rhetoric; the one that was printed in Greek he annotated, and he scribbled all over the book. It was amazing to see Gladstone’s engagement with the Rhetoric. This book was published in 1820, so I guess it might well have been when he was at university. I’ve included a reference to that in what I’ve been writing about as well, so I’ve even made use of the Gladstone Foundation Collection.

A number of Justin’s publications, including If You Meet George Herbert on the Road, Kill Him: Radically Re-thinking Priestly Ministry (Continuum, 2009) and You Are the Messiah and I Should Know: Why “Leadership” is a Myth and Possibly a Heresy (Bloomsbury, 2013) are available for purchase from our Gladbooks bookstall, located outside Reception.

Our thanks to Justin for taking the time to share his thoughts.