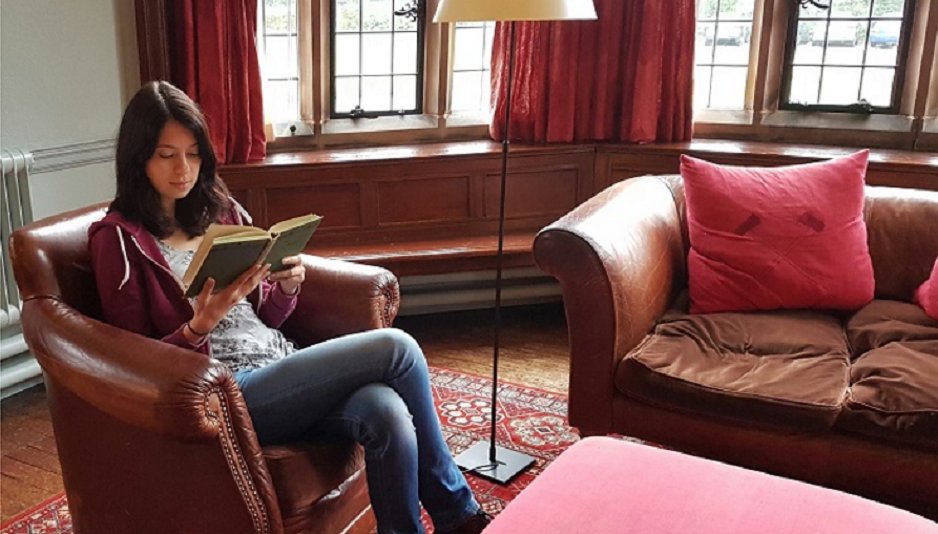 My name is Jennifer, I’m 22 years old and I’m the current Swiss intern at Gladstone’s Library. But how did somebody from Switzerland get to work here? Long story…

One year ago Britta Biedermann came to my school to talk about the Leonardo da Vinci Mobility Project. Britta is the Project Manager and the project’s main mission is ‘Mobility for Young Swiss Librarians in European Libraries and Archives, Learning Across Boundaries’. But what does that mean?

It means that if you’re a Swiss Librarian or Archivist who will graduate in the next year, you have the opportunity to apply to receive a three / four month scholarship in either the Oxford Bodleian Libraries, the House of Commons in London or Gladstone’s Library in Hawarden. I took the chance and wrote an application. One month later I got an email from Britta saying that I had been successful and had the opportunity to work at Gladstone’s Library. Now we had to wait for the response from the scholarship to confirm my place. In the meantime, I studied for my final exams. A few weeks before they began, Britta told me that the scholarship had accepted me and Gladstone’s Library and I’d soon be on my way to Wales.

But before I could go to Gladstone’s Library I still had five months ahead of me. At that point I had a work contract with a community archive where I was working while I studied. In Switzerland you study for two days a week and on the other three days you have to work in a Library or Archive, so you can apply the things you have learnt to a practical working place. In between graduating and going to Gladstone’s Library I had a lot to do. The money I got in advance from the scholarship was just enough to pay for the room, food and flight. But of course I wanted to see something of Wales and England and to travel around or go to the pub with the other interns. So I got another job during the Christmas sales and trade fares.

After what felt like hundreds of emails I finally got the chance to meet Louisa (Yates, Director of Collections and Research) and Peter (Francis, Warden) in a Skype interview. I was so nervous I couldn’t speak a word. But they were looking forward to welcoming me in 2017. Normally the interns from that scholarship would start working in the same year that they applied, but because of my work contract I started my internship at Gladstone’s Library on 3rd January 2017.

On that 3rd January I flew early in the morning from Genf to Liverpool. Unfortunately I found out at the airport that the railway line between Liverpool Lime Street and Chester was closed for maintenance. After one bus, one train, a replacement bus, another train and a taxi (I had definitely had enough of public transport by the end) I arrived, with my 66 pound suitcases, at Gladstone’s Library. And I was so happy when Siân (Morgan, Archives Assistant and Receptionist) and Ruth (Jones, Intern) gave me a warm welcome. 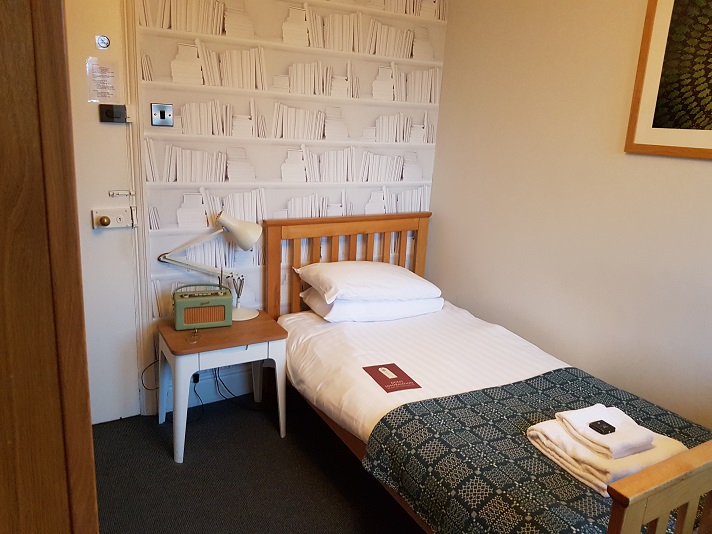 Siân explained to me where I could find things that I might need in the building and Ruth showed me my bedroom. I arrived around 3pm and stayed in my room until dinner, I was so exhausted. At dinner I met Ceri (Thompson, Intern) and Rebecca (Lovell, Intern). They were so friendly and gave me more information about the next working day and the other colleagues.

My first impressions of Gladstone’s Library and Hawarden where mixed. I loved the historical building, the fact that it’s both a Prime Ministerial library and a residential one, as well as all of the history and knowledge it contains. I wasn’t so happy about the slip-book system, the library’s lending system. I understand how important it is to know which books are used and in which areas, so the Library can buy more books on these subjects, but it brings a lot of work for us, the interns, which we wouldn’t have to do if we had an electronic lending system! But an electronic system costs money, a lot of money actually – it would cost over £22,000 to include the books and items which Gladstone’s Library currently owns, and this cost would increase with every new item acquired. Anybody like to help us out by making a donation??

Another thing I find difficult is the public transport, but that’s probably because the public transport in Switzerland is so flawless and I just have to get used to it. What I really appreciate about British people is their good manners and their openness. It made it easier to settle in.

So how is it working at Gladstone’s Library? It’s really varied. I think that comes from having a small library and archive team. On my first working day I was introduced to Gary (Butler, Library Assistant) he gave me a tour around the library, the collection and showed me what the team is working on at the moment. Then I started to work. I processed, re-shelfed, catalogued, labelled books, processed journals, learned the classmark system, helped with requests, led inductions and Glimpses. I was really terrified before my first Glimpse. I’m not the type of person who presents something without practicing it over and over and over, but I had to and it wasn’t as bad as I thought. I actually like doing Glimpses now. Probably not a Glimpse with 15 people, but with five or seven that’s OK.

Another thing I was daunted about was Marketing. I never liked social media, but then I met Amy (Sumner, Marketing Manager). She is so good at Marketing and makes it look so easy. I’m a lot better at Marketing now compared with when I arrived, particularly in terms of social media. When I arrived at the Library, I only had a Facebook profile and I started with Instagram the day I arrived in Wales, to allow other people to be a part of my adventure. But I hadn’t got a clue what I was doing and I actually had to google what hashtags are for and where I should put them. Now I’m fine with it. I do Twitter and Facebook posts on Wednesday, daily Instagram posts and from time to time I also use my private account. 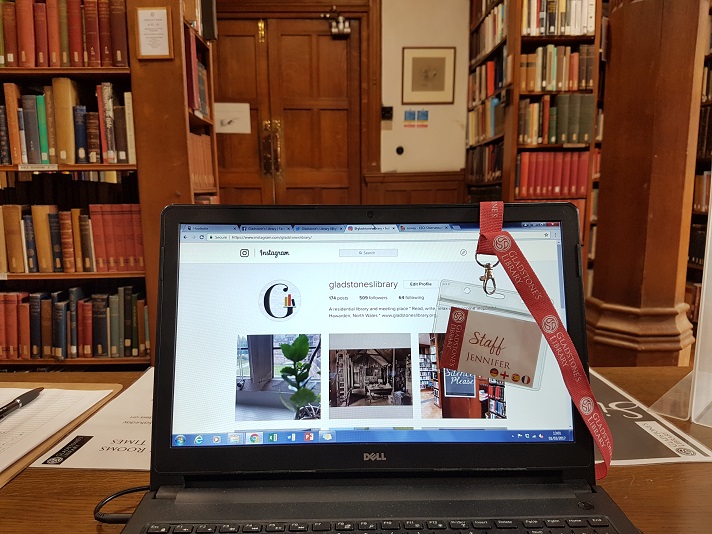 Next to work I have a lot of spare time. I have every Saturday and Sunday off, which isn’t usual for a Gladstone’s Library Intern. I’ve been to Manchester and Liverpool and spent time in both visiting museums and libraries - as a library intern you have to do that!

In two weeks I will fly back home to Switzerland and even though I am going home to my friends and family, I still feel sad about it. When I applied for the scholarship I thought ‘Three months is a really long time, it’s a quarter of a year’. Now I have to say it’s not long at all. Wales is a beautiful country and Gladstone’s Library a unique place. I’m happy that I had the chance to work here and meet the lovely staff. I will miss them when I’m not here anymore.

But I’m not the last Swiss intern at Gladstone’s Library. Peter and Louisa appreciate the work with Britta and the Swiss scholarship. They have already chosen the next Swiss intern and I have my fingers crossed that the scholarship agrees with their decision. We will found out in June… 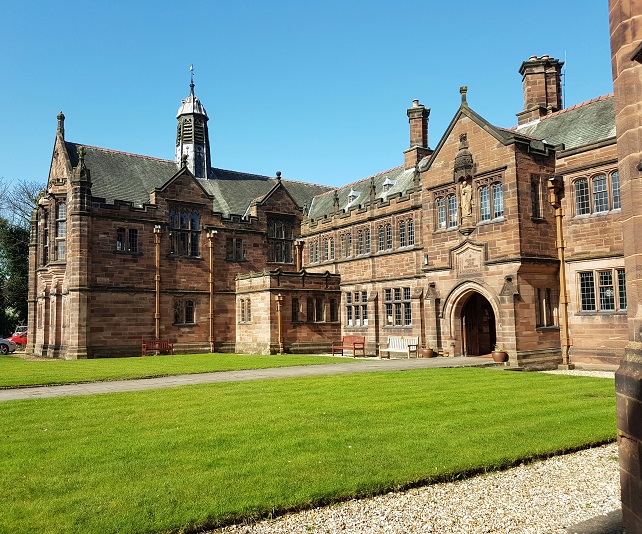