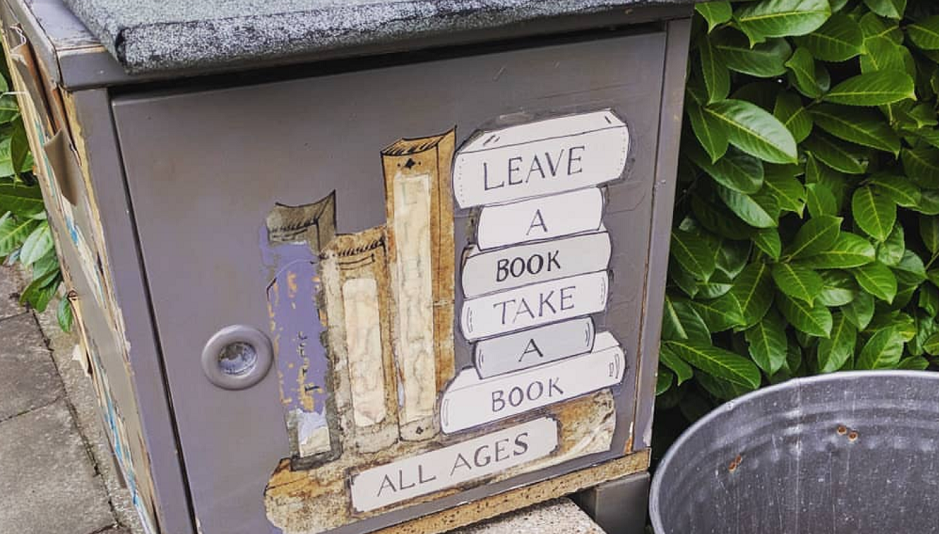 Perhaps you have encountered ‘lending libraries’ in the far corners of the Hebrides or on the bays of Cornwall. These could take the guise of a box perched on somebody’s wall, a wheelbarrow sprouting copies of childhood classics or those big red boxes with well-worn coin inlets, repurposed for reading and the exchange of ideas.

The trend of bookcrossing (leaving behind a book for someone to pick up) reflects William Morris’s sentiment in News From Nowhere; when William Guest is presented with a new pipe his initial response reflects the commercial anxieties of his contemporary society:

‘Don’t trouble about losing it. What will it matter if you do? Somebody is sure to find it, and he will use it, and you can get another.’

This philanthropic outlook is shared in the growth of little lending libraries across the world. One which can be found on the doorstep of Gladstone’s Library is in Hatton, Cheshire but there is a steady, increasing (and as I discovered, not always documented!) population of these spots across the UK. A local community which has also used BT’s ‘Adopt a Kiosk’ initiative is Rowen in the Conwy Valley and their information kiosk now houses books, walking leaflets and even a defibrillator.

Image use with permission from http://www.hattonvillage.co.uk/

Point in Cornwall is recorded as being the most southernly little library in the UK and Charleston, Black Isle, Scotland the most northernly. Hay on Wye, known for its literary heritage, is home to lots of ‘honesty’ book exchanges. Some of these can even be found perched on shelves resting against the castle walls there.

One of the projects which has aided the expansion of these little book depositories is ‘little free libraries’, a movement which started in America and has since entered international consciousness. Even the most remote and extreme climates are host to these havens of books. Grundarfjörður in Iceland is one example of where a post-box decorated with a guardian owl is now home to a small library with one of its founders, Lilja Magnusdottir, stating,

“this is our contribution towards making books available to the masses, so that current and future generations may enjoy the written word.”

Other initiatives such as Orkney Library’s Book Box service delivers boxes of books to people on North Ronaldsay and Papa Westray.

London’s underground is a metropolitan example of where book exchanges happen frequently, with Walthamstow being crowned as having the largest network of little free libraries in the UK. Similarly, Oval station is well known as the founding place of positive aphorisms in their ‘thought of the day’ but they’ve also got a book exchange, plants and classical music to make commuters feel more relaxed.

Book exchanges allow both social and literal mobility; for those who live in more rural places or who may be unable to travel to their nearest library, a depository of books can be an uplifting sign of care in the community. Gladstone’s own thoughts on ‘the placing of the same opportunities of knowledge within the reach of all’ is as pertinent as ever. With an increase in the closure of public libraries, these exchanges are modicums of thoughtfulness and a desire to share knowledge. These little libraries also hold the possibility of uniting kindred literary spirits, bringing a ‘distant’ place on this blue and green planet closer in to view.

Have you come across any book exchanges on your travels? If so, we’d love to hear from you! You can tweet us @gladlib with the hashtag #shelflife or leave a comment on our Facebook page.