Tales of Wonder and timeless tales of horror...

Tales of Wonder and timeless tales of horror... 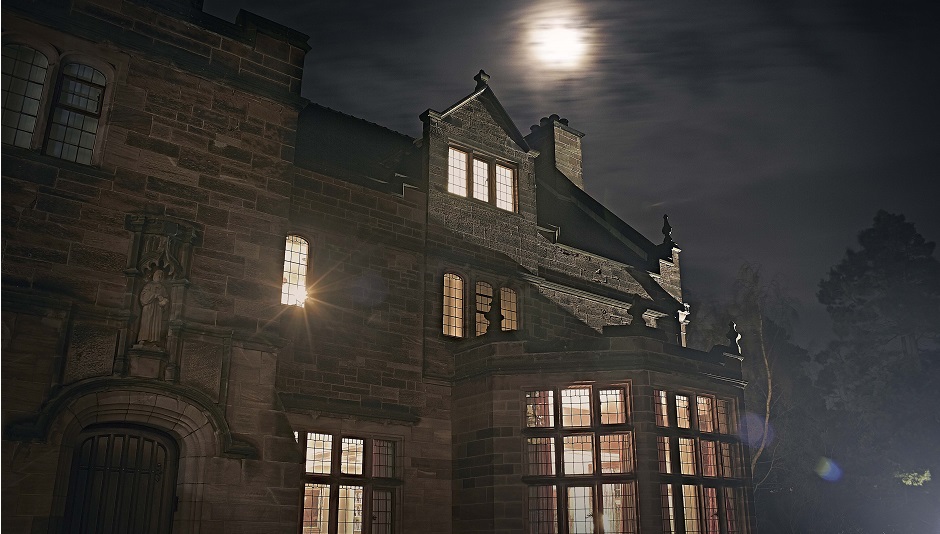 The month of Halloween is in full flow; the nights draw closer, the mornings mistier, and that black cat at the end of the street grows ever more ominous each time you pass. So, as every fancy dress lover’s favourite day of the year looms over us like a pumpkin-shaped apparition, there has never been a more appropriate time to look into the spookier side of our collections here at Gladstone’s Library…

Today, the revival of horror as a commercially appealing phenomenon in 21st Century cinema, combined with the spectacular rise of streaming services such as Netflix, has left us with unprecedented variety and accessibility when it comes to choosing how we want to scare ourselves sleepless. Furthermore, with technological developments continuing to enhance the quality of image and audio; these tales of hauntings, demonic possessions, and those vaguely creepy noises coming from the woods have never felt so realistic. 2018 truly is a utopia for fans of the genre, but how did those many ‘full moons’ ago fare? Did the very same things send shivers down their spines? Or were their tastes as perplexing as their sense of fashion? Maybe the library can provide us some answers. Be warned however, the following may chill you to your very core (or maybe just cause you a few slightly more anxious moments turning off the lights tonight).

It just so happens to be the very first item I chance across, when entering loosely Halloween-related searches into our online catalogue, that delivers the most intrigue, almost as if it wants to be found. In fact, it comes from William Gladstone’s very own personal collection; Tales of Wonder reads the title, an immaculate, brightly-coloured book dated all the way back to 1801. The exterior hardly screams blood and terror (see for yourself below), but perhaps more fittingly it entices its beholder, like the visual equivalent of a siren’s lure, or that mouth-watering gingerbread house from Hansel and Gretel. 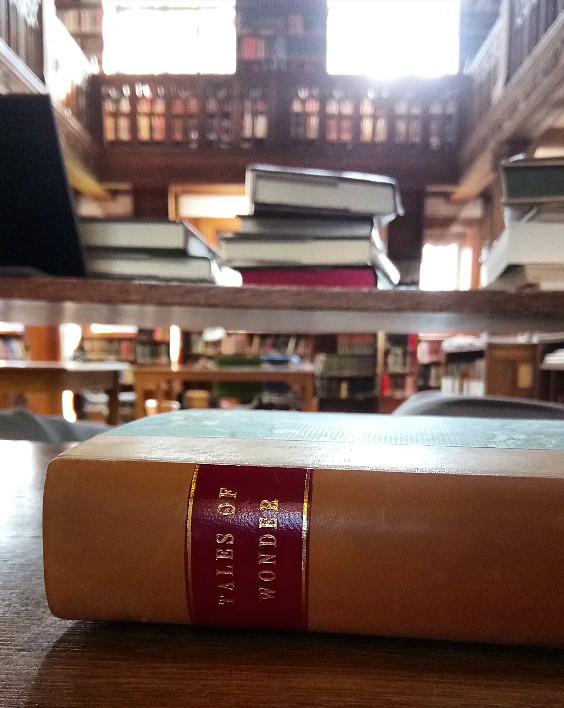 Fortuitously enough, the act of turning the first page doesn’t leave me on the slow-cook setting in a witch’s oven; rather, within I find an array of self-contained short-stories, poems and ballads, a fascinating and often haunting compilation featuring a variety of authors of differing origin. There is clearly much to see here, but for the purposes of length and time (and since we’re already on the theme of ‘first found’) I will be examining the opening work only, M.G. Lewis’ ‘Bothwell’s Bonny Jane’. This tale takes place in an oh-so-classic horror setting, the remote castle (this one being in Scotland), and tells the story of a love-struck young bride named Jane who is betrothed to marry a man other than her heart’s desire under order of her father. In a state of desperation, she confides in a visiting abbot, begging for his assistance. Seemingly won over by sympathy, the abbot agrees to help, instructing her to watch from the castle gate at night for a flame in the window of the nearby chapel, promising then to take her to her beloved. After two nights with no sign, she finally spots the signal on “All-hallow-E’en” (ominously enough), and gladly flees the castle. However, upon meeting the abbot, it becomes apparent that she has been iniquitously deceived; “thou art mine now” he utters as he abducts her onto a waiting boat. Upon making his escape across the adjacent river the weather suddenly turns violent and the boatman aiding the abbot stresses that the vessel will sink unless they shed weight immediately, intimating that losing Jane would solve this. The abbot responds by mercilessly drowning her, plunging her head beneath the waves. He yells at the boatman to row on, but then watches in shock as his accomplice morphs into an indeterminate hostile entity ‘With burning steel his temples bound, Throbb’d quick and high with fiery pangs; He roll’d his blood-shot eyeballs round, And furious gnash’d his iron fangs.’ “Thy cup is full!” the spirit exclaims, before proceeding to drag the abbot to the depths of the water. 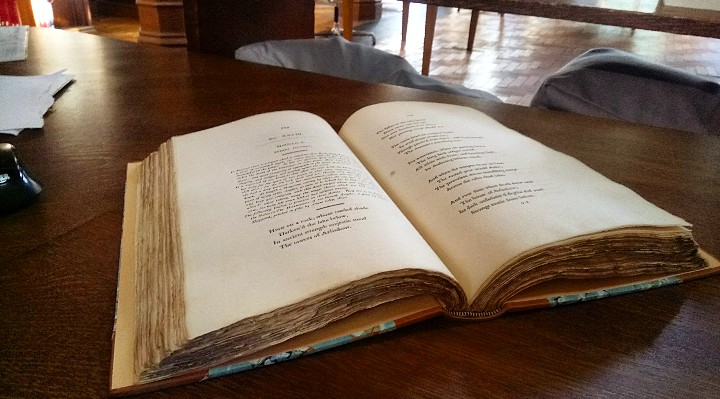 I chose to examine this story because it is most interesting in its comparability to its modern counterparts. Studying the antagonists, for example, reveals that readers at the time likely feared remarkably similar characteristics. The first is the trope of the ‘kindly stranger’, an anxiety that remains potent in its possibility. Jane is befallen by something that caution would categorise as an extremely tangible and dangerous threat, and for very good reason. It’s an unfortunate fact of life that we are required to be made wary of from a young age, and it’s in this realism that our fear is compounded. This is demonstrated effectively by the number of fictional works that continue to exhibit their depictions of evil as being masked behind a seemingly trustworthy and often charming or alluring facade. The genre is littered with instances of this on a more predictable and formulaic level, but has also been creatively subverted to great effect in movies such as Takashi Miike’s Audition and Jordan Peele’s masterful directorial debut Get Out, proving that the concept remains as fresh as it does distressing.

However, analysing the second antagonist, the boatman, reveals a tactic of fear which is even more prevalently employed in modern horror, one that plays upon a notion of failing to understand what we are witnessing. This serves as an inherent justification for our fear of anything remotely ‘paranormal’, because it defies all known logic, but can be utilised to an even greater extent when our understanding is limited further still. What makes the boatman so unsettling as a character is that, once revealed, it has no discernible form, and hence our comprehension of its threat and its intentions are left entirely ambiguous. To demonstrate, we know from classic tales that the likes of vampires, werewolves and zombies will attack us and try to bite us, and subsequently we, as the victim, will either become one of them ourselves or be completely devoured, and understanding this eventuality significantly reduces our anxiety; no matter how unpleasant it may be, we know our fate, and this offers an explanation to why these legends of horror have now been almost entirely diffused into other genres. Instead, the contemporary scene in cinema is currently being defined by inventive variants of ghosts, possessions and a multitude of other ‘unexplainable’ threats, suggesting that these are the tales that scare us most today. The comparable similarity to the boatman here is evident, especially when considering that some of the most highly-acclaimed releases of recent times, such as It Follows, The Babadook and 2018’s brilliant pair of Hereditary and Annihilation, also feature an antagonist that can morph into or disguise itself in human form but is otherwise structurally confounding. Scary stuff indeed.

It seems evident from this comparison that some fears, both grounded in reality and otherwise, are undeniably enduring, and that fiction being utilised as an effective platform from which to realise these appears to have been ubiquitous. This leaves the only truly fundamental differences through 200 years of horror to be of the stylistic variety, and that is to be entirely expected; it’s simply a case of adaptation to the present. From this, whilst fairly tame by our standards, it wouldn’t really be a stretch to imagine Gladstone himself reading stories from Tales of Wonder alone by candlelight in his study on All Hallows’ Eve, trembling all the while before inevitably being filled with substantial regret that night when every floorboard creek and gust of wind is reimagined as the harbinger of his imminent peril. We’ve all been there, old friend.

(FLS 2) – Notes on the Folk-lore of the Northern Counties of England and the Borders, William Henderson, 1879