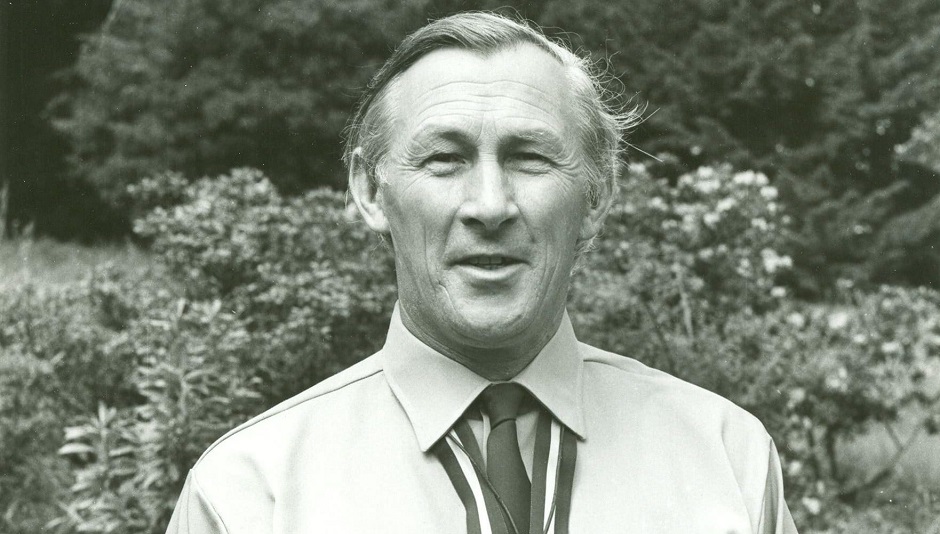 Here at the Library we mourn the death of Sir William Gladstone Bt, great-grandson of our founder, William Ewart Gladstone, and formerly our Chairman of Trustees. We also celebrate the long and fulfilled life of a person who contributed so much to the Library, as well as to his country and his county.

Sir William died peacefully on 29th March, surrounded by his family. He was 92. Born on 29th October 1925, the son of Sir Charles Andrew Gladstone Bt and Isla Margaret Gladstone, née Crum, he was educated at Eton and Christ Church, Oxford, like ‘Mr Gladstone’, as he called his great-grandfather. He married Rosamund Anne Hambro in 1962 and succeeded his father as 7th Baronet of Fasque and Balfour in 1968.

‘Willie’, as he was known to family, friends and Trustees, served in the RNVR during the Second World War, mainly on destroyers in the Indian Ocean. Having taught at Shrewsbury for a while he moved to Eton (1951-61), before becoming Head Master of Lancing, where he served until 1969. Having inherited his father’s title he retired from teaching and settled at the family seat, Hawarden Castle.

As well as taking charge of large estates at Hawarden and in Scotland, Sir William took on a number of significant public roles, including as Chief Scout (1972-82), Chairman of the Representative Body of the Church in Wales (1977-92) and Lord Lieutenant of Clwyd (1985-2000). All these bodies will testify to Sir William’s graciousness in public office and his commitment to the wellbeing of every member of the community (the Scouts, for example, recall his encouragement of the Movement in deprived inner city areas.) He was a Knight of the Garter.

It was as Chairman of Trustees at the Library, between 1989 and 2000, that he made the greatest impact on those of us who were involved in the Library and its operations. I first met him in the 1970s and got to know him better when he asked me, as a Trustee, to chair one of the interviewing panels for the appointment of a new Warden, the Very Revd Peter Francis, two decades ago. I was to cover the academic side, Willie the ‘human’. Sir William was, however, not only a shrewd judge of character but also a senior educationalist and the author of several books, including one on his remarkable forebear. As Chairman of Trustees he was patient, kind and deeply interested in the work of the Library. In 1998 he invited HM The Queen and Prince Philip to lunch at the Library, in the middle of a hectic round of engagements for them and for him, as Lord Lieutenant. A memorable occasion indeed.

As at Glenalmond College, where he served as Chairman of the Council, and at St Deiniol’s Church, where he was always seated in the same pew and generally read one of the lessons, he was maintaining a tradition of high-minded service that had come down to him from William Ewart Gladstone.

Sir William’s title now passes to our President, Charles Gladstone, to whom the Trustees and the staff of Gladstone’s Library send condolences and warmest good wishes.