Writers in residence katie hale my name is monster gladstone's

Rewriting a Novel in the Theatre of Listening by Katie Hale 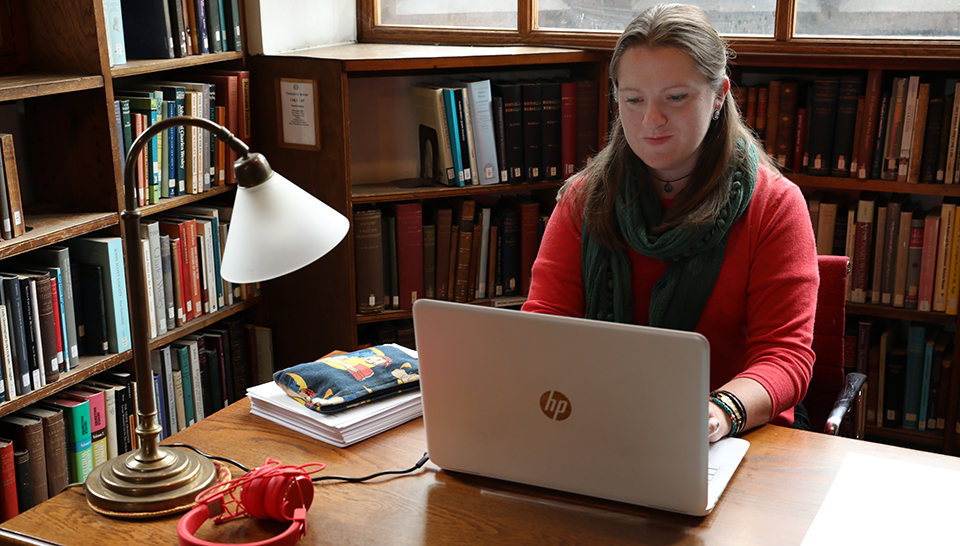 Katie Hale, Writer in Residence at Gladstone's Library forSeptember-October 2021, writes about the art of listening.

A skitter of mice in the attic / hum of the boiler starting up / the thunder of a tractor over the cattlegrid at the bottom of the village / collared doves, their clattering wings in the apple trees / the overhead buzz of a microlight / bulls lowing across fields at four in the morning / the primal screech of a heron at dusk / on a still day, the huff of machinery from the quarry / a distant train, muttering fervently like a prayer.

As much as the physical walls, these sounds have been the borders of my lockdown. Two weeks away from home and I still catch myself listening out for the neighbour’s cat, his scratching at the gatepost, his small mewling at the back door.

(Currently one of my favourite sounds in the world. After all, who doesn’t love the sound of being wanted?)

Over the past eighteen months, listening has become a passive act. When I hear the heron, I glance upwards to try to catch a glimpse of his angular and prehistoric form. When the cat mews, I open the door to let him in.

In his book, The Idle Traveller, Dan Kiernan talks about travel as a way of re-engaging with the world. When we travel away from the known, he argues, our body is forced to pay attention. It’s an evolutionary tactic, to make us more alert to the unfamiliar. Each new sight and sound is something that must be filtered and processed, to decide how we’re going to respond.

Away from home, he says, instead of seeing, we look. Instead of touching, we feel. Instead of hearing, we listen.

Last weekend was GladFest: the library’s signature festival, featuring a delightful and fascinating array of writers and thinkers. The events took place in the library chapel, and were streamed online, with only a small residential audience listening physically in the room – myself included.

These were the first partially in-person events I’d attended since before lockdown. The first events away from my sofa and the relaxation of my front room – where getting up to open the window, or to put another log on the fire, or even to make a cup of tea is something that remains compatible with the act of listening.

In the chapel, I crossed my legs and my foot tapped against the chair in front. I scratched my elbow and everyone heard. If I looked for too long out of the window, it had the power to draw the focus – the listening – of whoever was listening around me.

Suddenly, listening was once again a physical act, and I was hugely out of practice.

By the end of each day, I was exhausted. Drained – in that satisfied, fulfilled way, the way a rich glass of wine is drained after a hearty meal. What was left was the hollow shape of my body, moulded by what had been consumed.

I came to Gladstone’s Library with a very rough-and-ready first draft of my second novel: a stack of papers that had been demanding my attention for the past few weeks, and which I had been studiously ignoring. Absence, I told them (out loud as they waited on my desk beside the mewing cat), makes the heart grow fonder. It’s as good an excuse as any.

During my month in residence, the task I set myself was to begin working on a second draft. To take these disparate jottings and disconnected plot points and turn them into something shaped vaguely like a novel. Something with a rise and fall – a melody – rather than the cacophonous bundle of scenes I had before me.

Before I arrived, I was thinking of this redrafting work in terms of interior design: rearranging, knocking down walls, putting up barriers. The right shade of intrigue here. An curling embellishment there. Most importantly, the removal of anything not serving the higher purpose of the novel. Marie Kondo-style, it was a highly organised and deliberate process of tidying up.

But, as many writers will attest, order in a novel is not something you impose. It isn’t a template to draw around and cut away everything that sits outside its borders.

In the Reading Rooms at Gladstone’s Library, there are sounds – shuffled papers, footsteps on the narrow wooden stairs, the occasional rumble of traffic – and of course there are. True silence is shocking and deafening, an existential lack.

But the Reading Rooms also contain a spirit of hush, like that in a vast cathedral. A reverence given to spaces that hold something bigger than themselves.

In the whispering quiet of other people’s books, the library becomes a theatre of listening – all of us engaged in the same act of tuning into something beyond the everyday sounds that surround us, be that our own words or somebody else’s. All of us experiencing our own separate stories in synchrony.

In this theatre, it’s become possible to listen to my novel.

It’s a listening I do with my whole body. I sit in the office chair and it’s a kind of centring. I plant my feet on the floorboards and I’m aware of my shoes, how comfortable they are, whether my ankles are too cold and I should have worn thicker socks. I lay my manuscript around me on the desk: completed pages on my left, pages to work through on my right. I hold them in my hands, leaf through them, rearrange the order. It’s a physical, tactile process.

When I go for little post-lunch walks around the Hawarden Estate, or wander through the churchyard of St Deiniol’s next door, or take the little branch-line train to Caergwrle to climb up to the castle and take in the view, I take this listening with me. Theatre, after all, is nothing if not carried out beyond the fourth wall, out of the auditorium, into how we engage with the world.

To return to Dan Kiernan, and travel as a way of forcing the body to pay attention: instead of seeing, I look; instead of touching, I feel; instead of hearing, I listen.

In the theatre of listening, every moment becomes an act of rewriting. As I alter my responses to the world around me, I write new neurological pathways. As I develop a new routine, new daily habits, I rewrite the way I inhabit the space, the spaces beyond that space. And as a result of this bodily rewriting, yes, I rewrite the novel.

In the little nook of the library I’ve claimed as my own, I listen to the flies buzzing in the gaps of the windows behind me. Caught between the inner and outer panes, between the hush of inside and the beating outside call of the sun, they batter against the inside of the glass. I am listening to them with every word in my body. I open the outer window, and set them free.