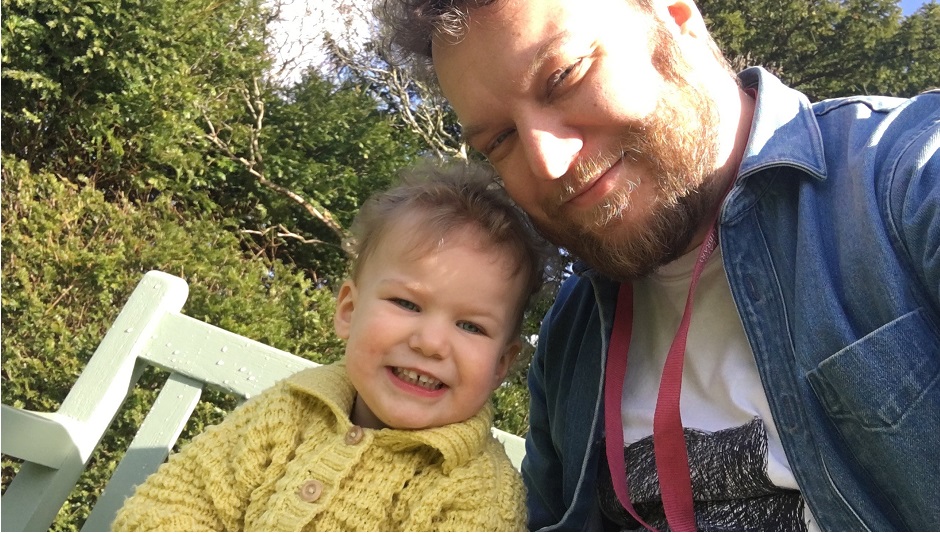 Image: Oliver with his daughter Matilda, at Gladstone's Library.

My two year old daughter has been with me at Gladstone’s for the past few days. Like any parent of a toddler will tell you, her desire for play is tireless. Tell me a story. Let’s go outside. Shall we dance? I’m a monster. Rrrr. There is seemingly no end to her enthusiasm and joy for making things up and mucking around.

I’ve been writing plays all my adult life and, for the last 15 years, professionally. I’m forgetful and useless at maths but the count is somewhere near 40 plays produced for both stage and radio.

In a neat piece of symmetry, next year I’ll be 40 years old.

One of my aims in coming to Gladstone’s was to spend some time looking back over what I’ve achieved but also what kind of writer I wanted to be going forward. It’s an absolute delight and honour to be the first playwright as a Writer in Residence at Gladstone’s Library.

I still find writing a struggle.

And probably not for the reason you imagine.

I write every day. At least 500 words but often as much as 2,000 words. It takes me roughly three - five weeks to complete the first draft of a new play. Most plays take seven drafts to get right (although I have been known to get to 17). I write up to five plays a year. It’s my job.

Writing the words is not the issue, it’s play.

I work hard. Sometimes for very little money. But what I’m investing my time in is playing. Telling stories. Dancing. Making monsters. Play is half of my job title but in a professional context it can be easy to forget. I often find myself concerned about career, peer recognition, the pressures of a deadline. Play falls out of sight.

So whatever conclusion I reach about what the next step is, Gladstone’s has been a moment of switch off, relaxation, reflection and, yes, play.

I may not have the boundless energy of my daughter but I’m doing my best.

The Monstrous Heart by Oliver Emanuel opens at the Stephen Joseph Theatre in October 2019 before transferring to the Traverse Theatre, Edinburgh.