NOT researching in Gladstone’s Library... 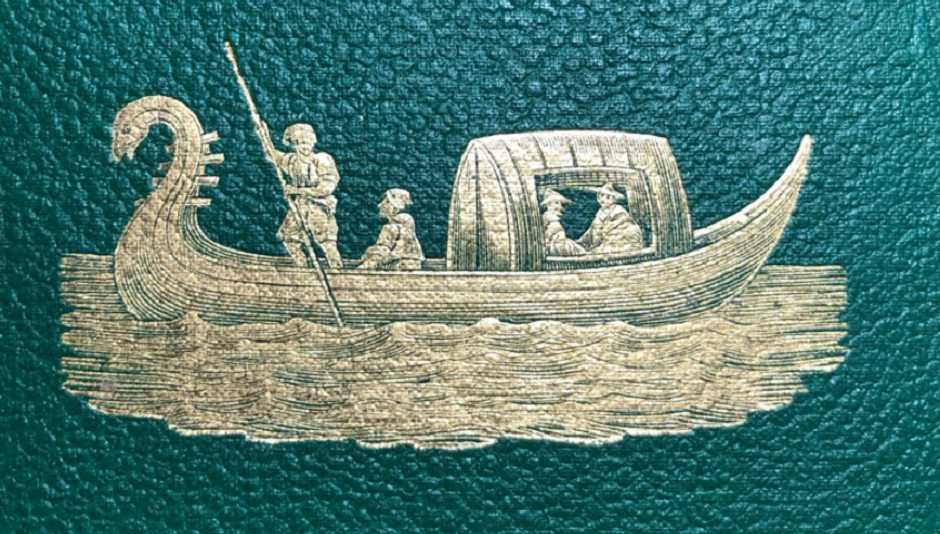 You know that moment, when you really should be hard at work. When you really should be reading your way through a particularly dense chapter that is connected to the subject of your next book, with loads of footnotes and references which you have to laboriously work your way through, holding down the page number, consulting the back of the (heavy) book, with the name of the author, the publisher, the date of publication, and let’s face it, all the boring information you need. And your neck begins to ache, and you think you really must stretch your legs, at least stand up and take a turn along the shelves where the grass suddenly seems greener, and the books seem far more glamorous and fascinating. And so you do. You wander along the hallowed aisles, your eye trails along the spines, across the ridges and furrows of cord, the earthy colours of linen cloth, the gold embossed lettering, the antiquarian leather goosebumps, the greens, and ambers and rusty oranges. You stop. You slide one out. A hidden treasure! Your eyes widen at an exquisite, yet rather peculiar, embossed etching burnished into the centre of the front cover. Is it a strange toy? A Japanese kuduko invention from the 19th Century?

'What these coccospheres and rhabdospheres are, we are not yet in a position to say with certainty;'

'...but our strong impression is that they are either Algae of a peculiar form, or the reproductive gemmules or the sporangia of some minute organism, probably an Alga; in which the latter case the coccoliths and rhabdoliths might be regarded as representing in position and function the ‘amphidisci’ on the surface of the gemmules of Spongilla, or the spiny facets on the zygospores of many of the Desmideae.'

Oh. Good. And good words too, coccoliths, gemmules, amphidisci, spiny facets…There are maps that fold out, and charts of the curves constructed from Serial Temperature Soundings between Tenerife and Sombrero. There are 106 pages on The Equipment of the Ship alone! I slide out another book, then another. More exquisite central motifs stamped into old leather, more embossing and delicate etching, more gold. I am a long way from my planned morning’s work, The Rise and Fall of Adam & Eve is open but abandoned on the desk at the other side of the library, along with St Augustine, Descartes and Darwin. Indeed I am sitting at another desk entirely, engrossed. A bottle-green leather jacket bears a  golden papyrus boat on a delicate golden sea. A necklace of woods in black frame a little hamlet of golden houses etched on nut brown linen, there is smoke twirling from the tiny chimneys, tiny rowing boats on the river and a man fishing by the bank (could be a woman but I doubt it.) I am entranced by each minute world rendered in immaculate detail. I slide out another. And another. There are reds the colour of claret, an Aegean blue with perfectly tooled fish. Dark violets and golden galleons. I pull out another. Many covers are plain, which makes a reward all the more sweeter. Distant peoples, far horizons, intrepid adventures and explorations, and then stories begin to appear. 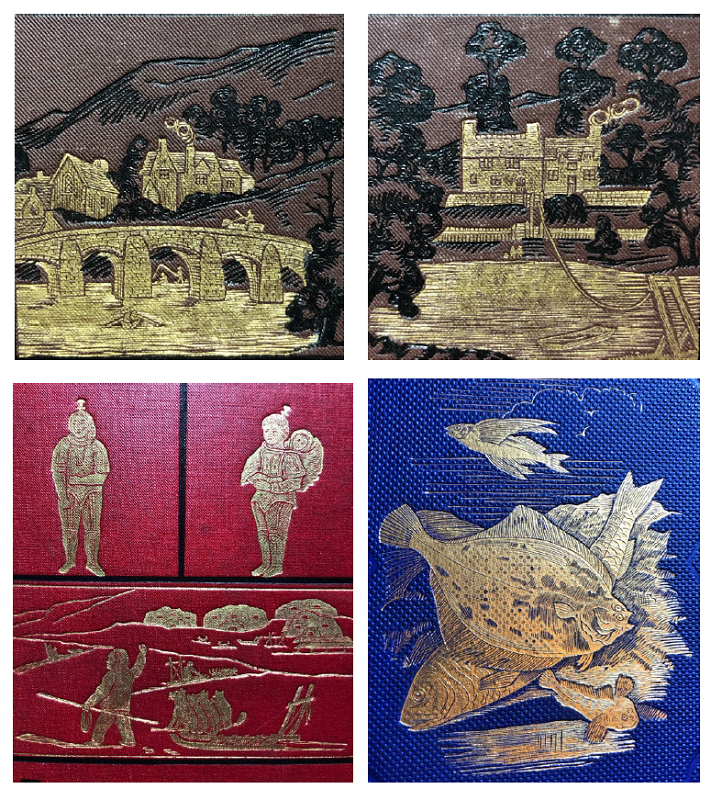 Greedy eyes begin to fall on thrilling titles. Adventure! Tales from distant lands. I am in the ice stacks, the glacial regions: Farthest North; The Open Polar Sea; Voyage of the Challenger; The First Crossing of Greenland; The Land of Desolation. How can one resist? My nostrils flare at the musty mouse smell of old paper. I have always been drawn to tales of adventure, and to a world before we tarmacked it over. Sailing across the high seas to undiscovered lands. I read my copy of Cherry Apsley Garrard’s The Worst Journey In the World until the book fell to pieces. And now I begin to tell myself that this is work after all. That there is bound to be the most wonderful wildlife observation from the decks of these exploring ships, that some extraordinary sight will be offered up, long forgotten and unearthed from these antiquarian books. Surely, the engraved cover motifs promise it. 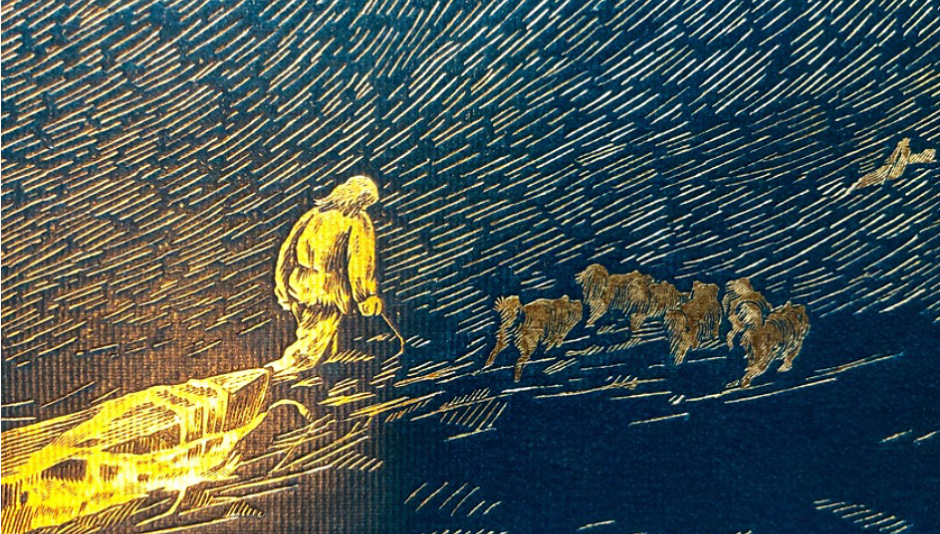 I should not have opened The Land of Desolation, by Isaac J. Hayes. M.D, but it is too late. A mother bear and her two cubs have been spotted on the ice.

'They appeared to be an affectionate sort of family, and were a very odd sight as they stood upon the old icefield, the only living things on that desolate waste. It seemed, indeed, a pity to disturb these denizens of the Polar wilderness.'

The cubs frolic and play. The ships entourage gather on the upper deck to watch, for the mother’s devotion to her young

'...was indeed touching, and worthy of all admiration.'

The bears, suddenly spooked, take to the water to swim to the floe from which they have become separated.

'At this moment they presented a magnificent sight, their beautiful long hair waving gracefully in the clear blue water; and their round, buoyant bodies floating along swiftly towards the ice and hope-for safety. The tender regard of the mother for her offspring was here as strikingly apparent as when on the ice. She would not abandon them; but, on the contrary, the nearer we approached the more she stuck by and encouraged them, still, as before, with one on either side. Once she invited them to dive, and, imitating her example, the three went down together, and paddled themselves along for some distance about twenty feet below the surface, where we could easily see them striking out for dear life.'

Damn you, Isaac J. Hayes. M.D. Damn your pen and damn your eye. Of course, I should have known better. It is never any different. I was right, it was work after all. The moment a wild thing is sighted, it is has to be shot. I return to my original desk, stomach in a fist. I jot down the title and reference page, then continue my reading for my next book: Two Tribes: Our Paradoxical Relationship with the Creaturely World.