Learning from failure by Emily Morris 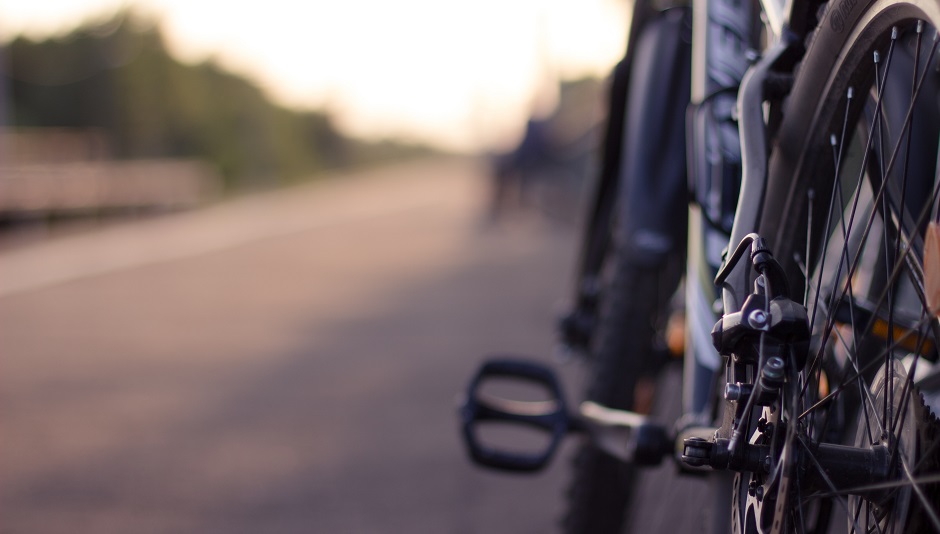 Back on a sweltering day in August, I was cycling along the Welsh Road when I heard a thud and a dull skid. I stopped, turned around and saw that one of my overstuffed panniers had fallen off the back of my bike and bounced into the gutter. I wondered if I could hail a black cab, but I wasn't in Manchester anymore.

I'm not sure why I decided to cycle from Chester to Gladstone's Library when I could have easily got the bus. I think it was something to do with wanting my arrival to feel like an accomplishment; I was going there to work hard and write, so if I had to challenge myself to get there in the first place, it had to be a good start.

In an uncharacteristic moment of common sense, I managed to tether my pannier back in place using my bike lock. My journey continued, until I got close to Hawarden and realised that there was no way of reaching Gladstone's without conquering an almighty hill. On my old bike, with its three gears, two of which were functional, and which was laden with a fortnight's worth of luggage. The irony of all this is that during my residency, I would be delivering a talk inspired by a quote from Gladstone himself: 'Failure is a success if we learn from it.'

By the time I arrived at the Library, drenched in sweat and ruddy-faced, it was almost time for tea. With the pannier incident and the hill, what should have been a one-hour cycle ride had taken me much longer. There was value in the length and the obstacles of the journey, though: as well as the exhilaration of achievement, I felt really, really far from home. And that's just what I needed.

I am an author, but I don't often feel like it. I am an author, but I am also a single mum, sole breadwinner and bill-payer, a school librarian and a freelance journalist. Contrary to popular belief, most authors don't make huge amounts of money from their writing, and because of my circumstances, I have to prioritise my 'day job' and any freelance work which helps me pay the rent and other essentials. This, combined with the day-to-day demands of running a house, trying to do (occasional) exercise and having a social life because I am human who gets lonely, means that my writing often feels like an afterthought. When people ask me how it's going, I panic, feeling fraudulent, because often I can't remember the last time I even looked at my manuscript. I read interviews with writers who talk about their writing sheds and their writing routines, and who seem to be producing new books every year, and I know that being a full-time writer isn't something that's possible for me and that, realistically, it will be years before my next book comes out.

At Gladstone's, at the top of the hill, far away from my chaotic life in Manchester, I got to spend two whole weeks being (or pretending to be) a full-time fiction writer. No pitching work to editors, desperate for a commission, no having to stop and get ready for work just when I got in the flow of good prose, no spending time listing stuff on eBay to stop me hitting my overdraft limit. The only demand of me was my writing. And above and beyond the experience of even a full-time writer, I was fed (delicious food!), not having to give cooking or washing up a thought.

I remembered quickly that I am not a morning person, but that's OK: the Reading Rooms at Gladstone's are open until 10pm and it was in the dusky hours after tea that it was at its most peaceful and inspiring. One Saturday night, under the watchful eye of a Gladstone's bust and with only a moth fluttering among the books for company, I wrote thousands of words. The quality of them was dubious in places, but I reminded myself of the importance of what writing guru Ann Lamott calls 'the shitty first draft'. In the precious time I had at magical Gladstone's, I just had to get it all down, ready to tweak at a later date.

And I did. By the time I packed up my bike again, I'd amassed over my target of 80,000 words. Buoyed by the success of my event and the kind words of those in the audience who'd read my first book, I felt confident in my work and like a writer: an actual writer. It was chucking it down with rain, a possibility I had briefly considered when setting off on that sunny day in Manchester, but ignored. It was only rain, I reasoned: at least I wouldn't get as hot as I had on the way. I was ready to coast easily down the hill that had nearly killed me on the way up and make my way back to reality. Until I decided to put some extra air in my tyres and one of them completely deflated. Cue ringing all the taxi firms in a wide radius until I found one with a cab big enough to transport me and my rusty steed to a bike shop in Chester for a new inner-tube.

More failure - and what could I learn from it? Probably nothing very profound, really: just that I should stick to the bus in future.

It’s November now and although I am back at school and as busy as always with real life, I’m trying to edit a chunk of my book every day. Without those invaluable two weeks as a full-time writer gifted to me by Gladstone’s, I wouldn’t even have the skeleton of a novel to work with. I’ve saved the document as ‘Gladstone’s [Novel Title]’ on my laptop. because it exists thanks to the magnificent opportunity I was given as a Gladstone’s Library Writer in Residence. A priceless chance to experience, if only for a fortnight, what it is for your main working purpose to be your creative output. Whenever I open that document, I am reminded of that freedom, that clarity, and I keep pushing on.