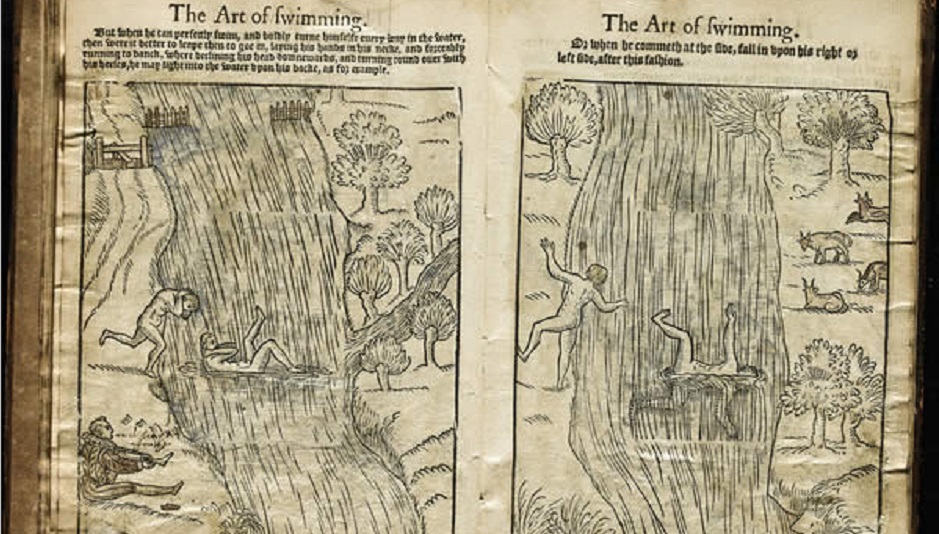 [Image from A Short Introduction for to Lerne to Swimme - Everard Digby (London, 1595)]

I’ve always been interested in the relationship between the work of the mind and that of the body, how one can influence the other, and the extent to which the physical overlaps with the mental: How the reservoir of one kind of energy seeps into or draws upon the other. Walking, famously, is the preferred physical pursuit of writers, and speaking for myself, few activities are as conducive to the kind of fecund, nose-following modes of thought out of which interesting writing often emerges. As Jean Jacques Rousseau said in his Confessions, ‘I can only meditate when I am walking. When I stop, I cease to think; my mind only works with my legs.’

While I was Writer in Residence at Gladstone’s Library in January – trying, rather frantically, to finish a book – I would take half an hour every day to stroll in the grounds of the old castle, or in the estate woods, or in the cemetery of the adjoining church. I’d also sometimes walk up the road to the chain-hotel by the motorway, where I’d swim in its small pool, alongside the sales reps in their Bermuda shorts, and groups of thrilled toddlers having their lessons, and ladies from the village doing their side-by-side breaststroke.

The writer John Berger has said that swimmers ‘share a kind of egalitarian anonymity. No shoes, no marks of rank. Just our swimming costumes.’ And this anonymity is one of the pleasures of swimming, for me. (I make a distinction between pool-swimming and wild-swimming, which are as alike as Pilates and skydiving.)

The other thing I enjoy about swimming is its particular rhythms. It’s been said that one walks at the speed of thought – or thinks at the speed of walking – and the same is true, for me, of swimming. It’s interesting how the rhythms of exercise – footstep after footstep, stroke after stroke – can find their way into the rhythms of prose on the page. Gladstone himself liked to chop down trees (one of his axes is displayed in the library), and I can imagine how a morning’s axe-work – the hundreds of blows required to fell a mature oak, say – might have fed into an afternoon’s writing and thinking, as well as providing an outlet for the kind of energies that are not dissipated by intellectual activity.

The other vital aspect of swimming, of course, is immersion in the unfamiliar element of water; and something about this self-isolation seems comparable to that experienced by a writer fully absorbed in their work. Charles Sprawson, in his classic cultural history of swimming, Haunts of the Black Masseur, characterises the classical swimmer as ‘someone rather remote and divorced from everyday life, devoted to a mode of exercise in which most of the body remains submerged and self-absorbed.’ He adds that swimming ‘appeals to the introverted and the eccentric, individualists involved in a mental world of their own.’

I’m not sure the ladies at the hotel pool would call themselves divorced from everyday life, but there is something about water that can temporarily shut us off from the world, within ourselves, which is a condition out of which good writing seems to emerge. Submersion in water is also a form of liberation, and when it is going well (hardly ever) writing is nothing less than that.

After my half-hour of splashing about, I would emerge from the water, shower and change, walk the mile or so back to Gladstone’s Library, resume my seat at my desk in the corner of the creaking wooden gallery – and start to type once more. And in the unfolding of my thoughts and the unfolding of my sentences, I could sometimes detect the rhythms of the pool: the face lifted and submerged, the breath held and released, the head turned this way and that, the turning-back on oneself at each end; and all the time submerged in the invaluable silence of Gladstone’s Library, which, it seemed to me, was something like the silence of being underwater.