Katie Hale: Why write another novel? 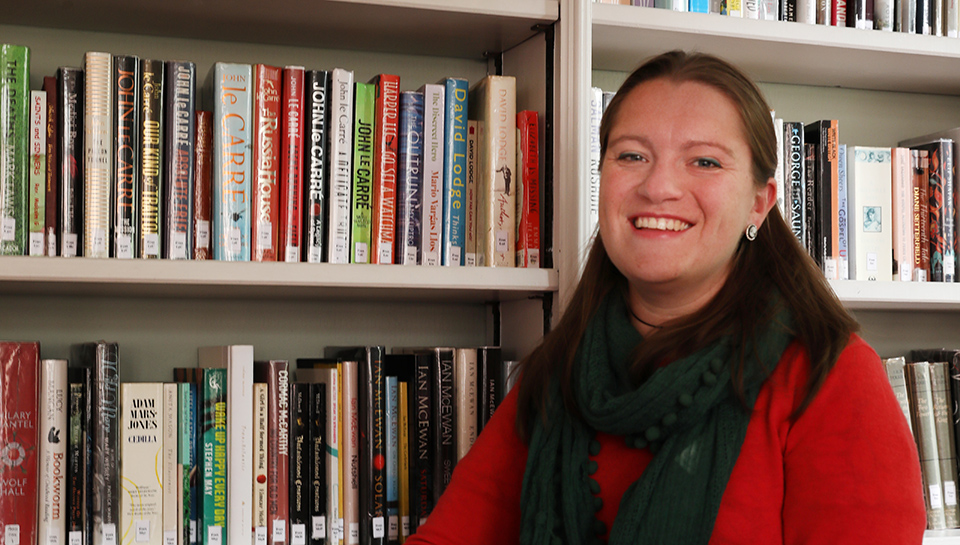 Katie Hale, our first Writer in Residence since lockdown, just finished her residency at Gladstone's. Why redrafting her new novel, she grappled with a question that affects many writers: with so many books out there, why should there be one more?

The Gladstone’s Library collection contains over 150,000 books, journals and pamphlets. That’s a lot of published material by anyone’s standards. More than even Gladstone – who read an impressive 22,000 books over the course of his life – could hope to get through.

I’ve spent the past month sitting at the same desk in an alcove in the library’s Theology Room, working on a second draft of my second novel. I have shelves of books behind me, and more encasing me on either side. In front of me, the space opens up into a gallery with books all around the walls, books on the shelves that divide the desks from one another, books where the floor drops away into the void, books on more shelves around the walls downstairs, books stacked upon books stacked upon books.

In many ways, this is an idyllic place to write. In other ways, it can be daunting. With all these books already out there in the world, why on earth am I bothering to write another one?

There are, of course, many answers to this.

One is that those books were written then; I’m writing now. Whether directly or indirectly, books reflect on the society in which they’re written, and society doesn’t remain static. While Pride and Prejudice might be an excellent novel, and one in which we can still enjoy recognisable characters, the circumstances of our reading it are now radically different than when the novel was published in 1813. The central premise of daughters not being able to inherit property, for example, is something which is thankfully less of an issue today, at least in the UK.

We can still enjoy novels from hundreds of years ago, but we do so in the knowledge that they are written in a particular time. We do so with an awareness that our present rules and societal expectations are often different.

So, we also need new novels, to document and critique and reflect upon our own time.

Another reason to keep on writing books, is the question of who has, traditionally, been permitted to write (whether officially or because of other social factors such as demands on time), and of whose stories have been allowed to be told. This is, unfortunately, still an issue today (see the Society of Authors pages about diversity – or lack of it – in publishing). But, as a queer rurally based woman (albeit a white middle-class one), I have more avenues to write and publish my stories than may have been the case a century or more ago.

But there’s also something far more individual about writing a book. Something that is about my personal relationship with creativity, rather than my relationship with society as a whole. It isn’t just that I write because I think I ought to, or because I believe the world needs more stories. It’s because I can’t not.

I’ve heard authors say that, if they couldn’t write, they would die. For me, I don’t believe this is true. I’ve spent enough time thinking and writing about survival (a whole debut novel, in fact) that I’m pretty sure I would go on living and breathing and eating and sleeping and all the rest of it, even if I stopped writing any of it down. That doesn’t mean I would still be happy.

What I do believe, is that my life would feel immeasurably worse if I stopped writing. If I stopped having an avenue to create.

Writing, for me, is like company. I can go long periods only an occasional hello to the postman, but it doesn’t mean it’s good for me. It doesn’t mean it doesn’t have an adverse effect on my mental health. There’s a saying for remembering how long humans are able to survive: three days without water, three weeks without food, three months without company. Humans are social creatures. Even the most introverted of us require some human interaction now and again.

We’re also creative animals. Even if we don’t write it down, so many of us are always writing in our heads – we tell ourselves stories, we construct narratives of the world around us, we cast ourselves as heroes or villains or somewhere in between. We look at problems and we come up with creative solutions. We assess situations and play out possible scenarios in our heads.

For me (and I would guess for most other writers), this creativity is a kind of drive – not only to imagine worlds and possibilities, but to take that imaginative process and turn it into something physical. To take thoughts and ideas and observations of human behaviour, and to transform them into words on a page. To then take those words and apply structure and organising principles, to transform them into a poem, or a short story, or a novel, or a piece of creative non-fiction. To see those thoughts manifest (in the of traditional printing) as a physical book which a reader can hold in their hands.

Is it any wonder this process becomes addictive? Is it any wonder so many writers assert that they have to write? It’s an act of magic, with writer as magician. It sits somewhere on the border of chaos and control.

For me, it doesn’t matter that the world is already filled with novels. It doesn’t matter that I’m sitting in a room that’s bristling with them. Writing my own novel is a personal act. It’s a way of organising the chaos (and let’s face it, we could probably all use a little of that at the moment), a way of understanding my place in the universe and writing through other possibilities. There may be millions of other stories already out there, thousands even in this very room – but my own novel is my own personal contract with the world, and nobody else can make that contract for me.