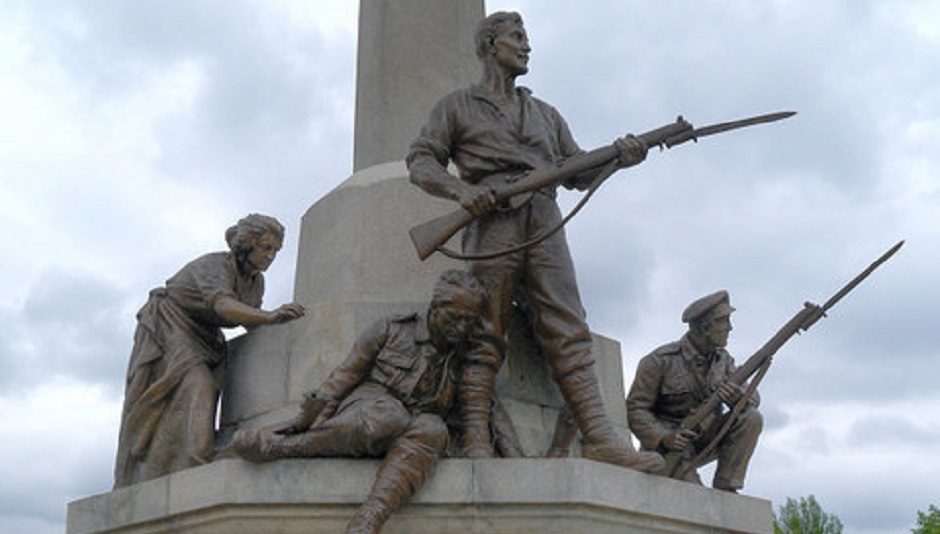 Rachel Mann has worked as Teaching Fellow in the Philosophy Department at Lancaster University and holds qualifications in Theology and Creative Writing / English Literature. She began writing poetry, liturgy and short stories in the late nineties and has also written feminist liturgical theology, cultural history and is a regular contributor to the Church Times. Rachel has published three books; Fierce Imaginings, Dazzling Darkness and The Risen Dust as well as contributing to many others.

In July, Rachel leads a course at Gladstone’s Library entitled ‘Fierce Imaginings – The Great War: Symbol, Memory and God.’ During the course Rachel will explore the way the Great War is with us still, as well as the place of war in Christian, feminist and liberal thinking. Drawing on poetry, history, family memoir and the iconography of remembrance, this course aims to offer an opportunity to examine the Great War’s lasting impact on British and European identities in the shadow of the Brexit Referendum. The course also includes a film screening of 1997 historical drama, Regeneration.

Before the course, we spoke to Rachel to find out more.

Hi Rachel, can you please give us a little introduction to your course – how you came to put it together and why it’s happening now?

The course is an opportunity to reflect on how – 100 years on – we still live cheek-by-jowl with the after-effects of the Great War. Not only was the catastrophe significant for how we read society and politics, but for rituals of remembrance and what we believe and don’t believe about national and religious identities. The course has come out of my new book, Fierce Imaginings, which combines life-writing, cultural history and literature to reflect on what we still have to learn from the War and its after-effects.

How important are the lessons of the Great War in the context of society today and how important should they be?

It’s easy to think, ‘Oh, the Great War is just history’ or ‘if we must talk about war we should do so in terms of more recent conflicts’. Yet the Great War is iconic. It signals how the effects of war, even with limited initial aims, cannot be controlled. From a British point of view, one of its odd effects has been to create the impression that the era which preceded it was a golden age and society has never been quite as innocent. It gets played out to this day in the way we think about the Victorian and Edwardian eras of Empire, and class and culture. And it’s complicated. In a time when people are trying to figure out what ‘Brexit’ and ‘identity politics’ mean, there are some tantalising and nostalgic pictures of British past that tempt us.

Inevitably remembrance gets shifted by factors like the evolving nature of war and Britain’s position in the world. So, for example, the Second World War inevitably affected how people picture the remembrance rituals created by the Great War. I think many of us thought they’d die out in the 90s, but as Britain has negotiated increasingly complex questions of community, identity and faith, it’s fascinating to see how remembrance rituals – e.g. wearing a poppy – have been taken as markers of some kinds of identities.

Why do you think the poetry of the Great War was and remains so pertinent?

Part of the answer lies in how Owen, Sassoon, etc. constructed our popular pictures of the nature of war. We remain simply dazzled by them, despite the fact that the mechanics of war’s prosecution have changed so much. Many of the poems generated by the war found language that spoke into the horrible ironies of the war and speak still into the ironies of modern living.

How far do you think the Great War has had a lasting impact on our identity as British and European citizens?

The Great War’s impact is unavoidable. In it lies a seed of the Second World War; modern ‘Europe’ is, in many ways, an effect of the Great War and its imperial obsessions. The EU has offered one response to the territorialism of the imperial mind. And yet here we are. We seem to live in a time when Europe is fissiparous again and Britain appears to be playing an isolation game akin to the Victorian attitude of ‘splendid isolation’.

One of the course sessions explores how far public memorials enable us to forget. Do you think this is a recent development?

Personally, no. Memorials have a gift or side-effect of allowing us to empty our memories into stone and marble. We can hide our responsibilities to remember and change in symbols. I think it’s an issue as old as civilization.

You’ve been a recent poet in residence at Manchester Cathedral. What have you been working on in your time there?

One of the things is this book. I’ve also written three other books, including two poetry books. A large part of the wider work has been helping the Cathedral connect with the wider literary scene in Manchester. I’ve acted as lead for the Cathedral’s international poetry competition for several years and have helped forge close links with Manchester Literature Festival, including helping to establish the unique literary Manchester Sermon.

What makes Gladstone’s Library a good setting for your course?

Gladstone’s is one of my favourite places. It’s relaxed enough to unwind, it’s learned enough to expand your mind and it’s quiet enough to properly reflect. It’s a place grounded in a thoughtful, critical tradition and it will bring the best out of anyone who wants to engage.

What are you hoping people will bring to the course and what will they take away?

I hope, most of all, that people will bring themselves, their family stories and a kind of honest vulnerability. Reflecting on ‘remembrance’ and ‘ritual’ is risky because it touches the sacred and holy ground and sacrifice. A generous receptivity will help us to share with respect and trust.

Who do you think would benefit from the course?

It’s always tempting to say, ‘everyone’! Realistically, anyone who has ever wrestled with the problems of both wanting to respect the legacies of those who served or serve in conflict situations, but are also unsure what our memorial practices add up to. It’s for anyone seriously wrestling about what the future for Britain and Europe is, given their histories of violence and mistrust.

What has been your greatest inspiration for your published imaginings?

My grandfathers and my aunts and uncles who were caught up in the conflict and irreparably changed. My grandads Bert and Sam who both fought in the Great War mesmerise me with the silence the war generated in them. Their wounds have been passed down the generations and I continue to live with them.