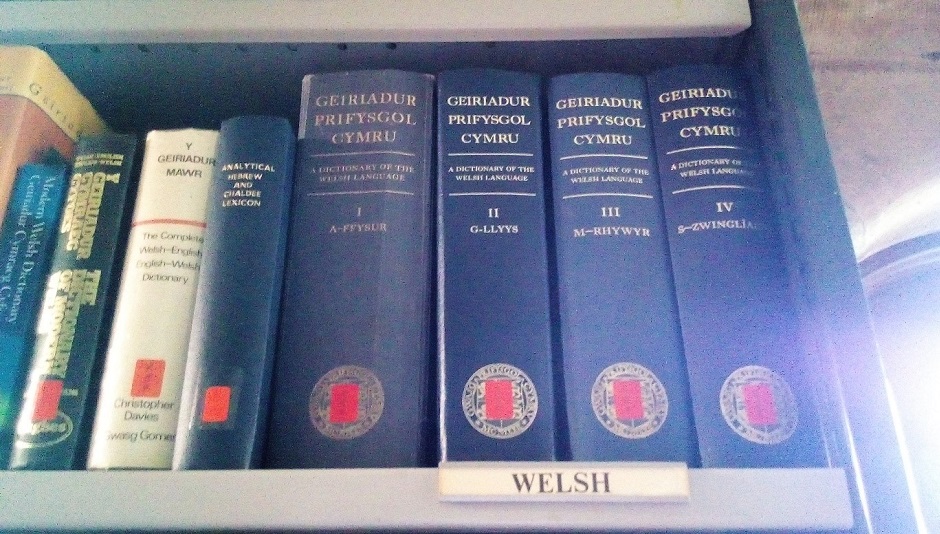 Although not Welsh himself, in 1894 William Ewart Gladstone decided to found his library across the Welsh border for good reason. The beautiful, remote countryside of Hawarden village, as well as nearby historic areas such as Ruthin and Mold, are steeped in culture and Welsh heritage. With an abundance of hills, forests and, of course, castles, as well as the mountain range of Snowdonia, Gladstone envisaged that rather than the congested streets of London, Liverpool or Manchester, North Wales would serve as the perfectly serene backdrop for his incredible legacy as well as provide the necessary air of tranquillity for study and contemplation. As a proud Welshwoman I can confidently say he made the right decision!

It goes without saying that W.E Gladstone was an immensely intelligent man. Unfortunately, out of the five languages spoken by him, he hadn’t quite got around to learning Welsh. But that shouldn’t deter Welsh speakers nor those looking to learn the language as the library does hold a good number of Welsh books! You merely need to search for the word ‘Cymru’ (Welsh for ‘Wales’) on our online catalogue and you’ll be rewarded with 109 results, these include not just books but also pamphlets, magazines and journals.

In this blog I will be listing some of the more interesting finds as well as translating parts of them.

Seeing as we are a library dealing mainly with theology books, the Bible or Y Beibl is an appropriate book to start with. There are a few Welsh translations of the Bible in the library, the best example is probably the one pictured below (classmark B/15.9/7) as it includes both the Old and New Testament. It is essentially a word for word translation as it starts with:

In the beginning God created the heavens and the earth. 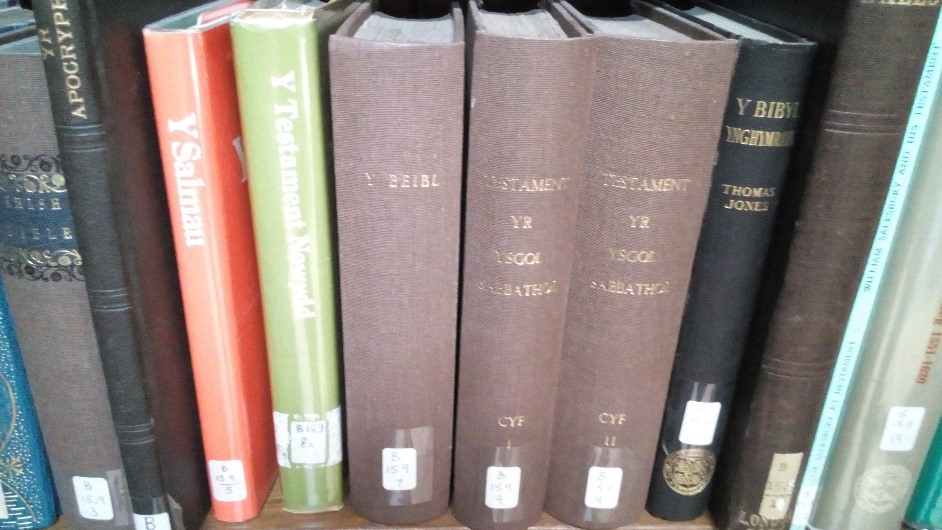 Next is an entire biography on William E. Gladstone in the Welsh language. Hanes Bywyd W.E. Gladstone (W. E. Gladstone’s Life History), published the year of Gladstone’s death in 1898, discusses the prominent events throughout his life. Chapter 20 goes into detail about his first time elected as Prime Minister (classmark M/34.9G/46).

On the 4th of December, 1868, Mr Gladstone, for the first time, was called to form an administration. He had little trouble carrying out this task; and by the 9th of the month, he and his co-officers took an oath of allegiance.

Up next is an incredibly dense but highly interesting book, Hanes y Brytainiaid a’r Cymry (History of the British and the Welsh). The book, published in 1872 by Cweirydd ap Rhys, is over 500 pages-worth of information concerning Welsh and British geography (classmark M/20/130a), much of which details differences between location names, for instance the section on page 20 on rivers and the confusion faced by the English. Many of us know of the River Avon. However not many know that this essentially means 'river river' - the Welsh word for river being ‘afon’ pronounced av-on. 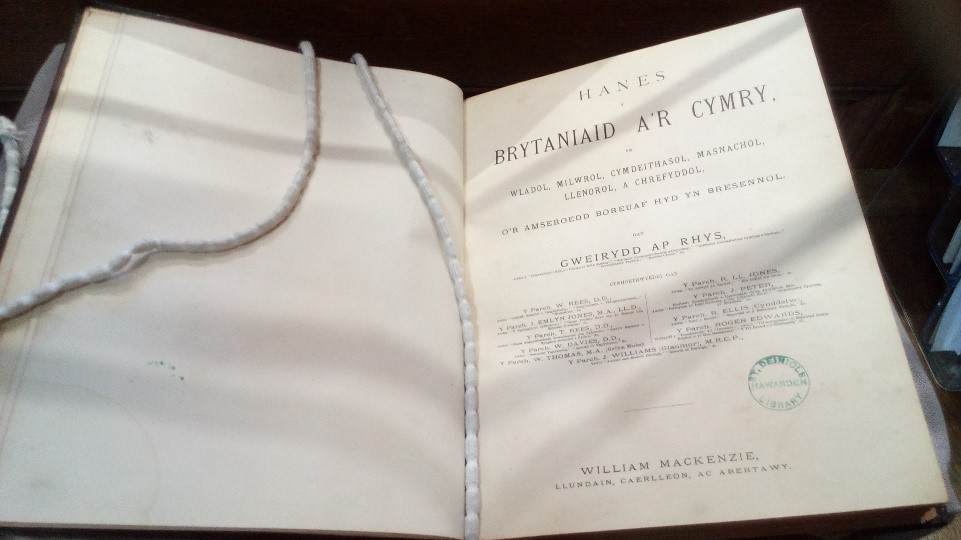 Such words were not initially considered as primary names, but they came, after the first residents […] then some other word was added to the word river

Rhys describes how the first English settlers adopted the word ‘afon’ and used it to name what is now known as the River Avon.

Some of you may already know that the harp is the national instrument of Wales. While searching for Welsh books in our library I came across this lovely little book written in 1980 by Osian Ellis called Hanes y Delyn yng Nghymru: The Story of the Harp in Wales (classmark M/48/64). This bilingual book is adorned with illustrations and photographs of harp players and the various forms the instrument takes as well as the sheet music created for them. Each page is written in Welsh with a word for word English translation on the accompanying page like so: 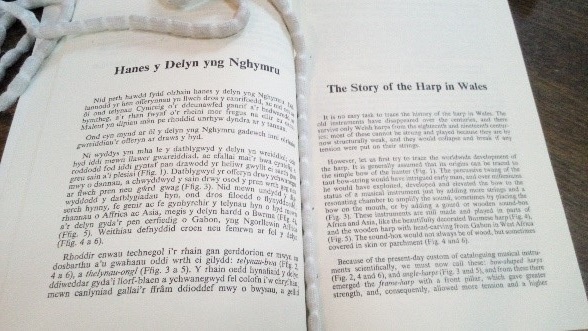 Another noteworthy find is our copy of the official programme of the 1888 Eisteddfod (the annual Welsh music and literary festival) which that year was held at Wrexham. The first page of the programme, found in our Annex (classmark M/48/29), has a list of rules and regulations for performing at the Eisteddfod which include:

Essentially, this means that anyone who isn’t a native of Wales or of Welsh decent cannot take part unless they have lived in Wales for more than 12 months.

On page 11 the programme presents details on the annual meeting of ‘The Association for Promoting the Education of Girls in Wales’ which was on Wednesday, 5th September 1888. Interestingly enough, the hostess of this meeting was none other than the fourth daughter of William Gladstone, Miss Helen Gladstone! 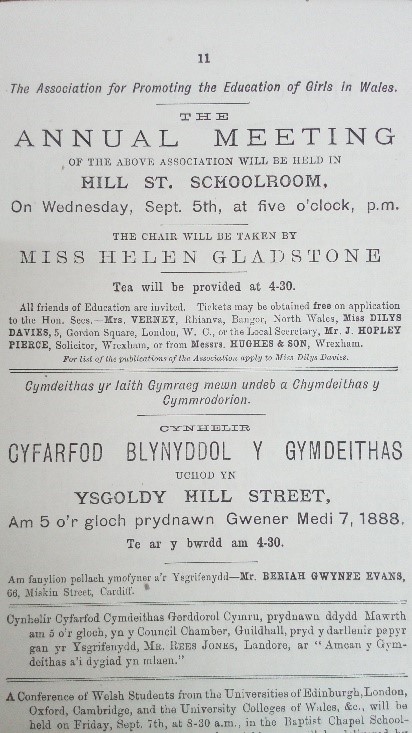 While rummaging through our boxes upon boxes of pamphlets at the back of our Annex, I came across Welsh Folk Songs by J. Lloyd Williams and Llew Tegid, published during the 1920s (classmark 43/Q/16). It has the lyrics and sheet music of 15 old Welsh folk songs with English translations. ‘Hen Aelwyd Cymru’ or ‘The Home of my Childhood’ ends with this heartfelt verse:

Whatever the future in store hath for me,

Of sunshine or shadow, on land or on sea,

No storm can obliterate, no pleasures efface

The early impression of that dear old place.

As well as plenty of books written in Welsh, Gladstone’s Library also offers resources for Welsh learners and those wishing to learn more about the culture. My personal favourite is the extremely useful yet compact Pocket Guide to the Welsh Language by Janet Davies (classmark M/48/81). It includes notes on the origins of Welsh, as well as its characteristics and resources on learning the language.

Another favourite of mine is also within the Pocket Guide series, Hywel Wyn Owen’s The Place-Names of Wales (classmark M/48/80). From Aberystwyth, meaning ‘mouth of the winding river’ to Ystradmynach, meaning ‘vale of the monk’. With a few notable entries such as Llanfairpwllgwyngyll meaning ‘church of St Mary in the hollow of the white hazel’, and of course, our very own Hawarden or ‘Penarlâg’ in Welsh which means ‘high ground rich in cattle’! 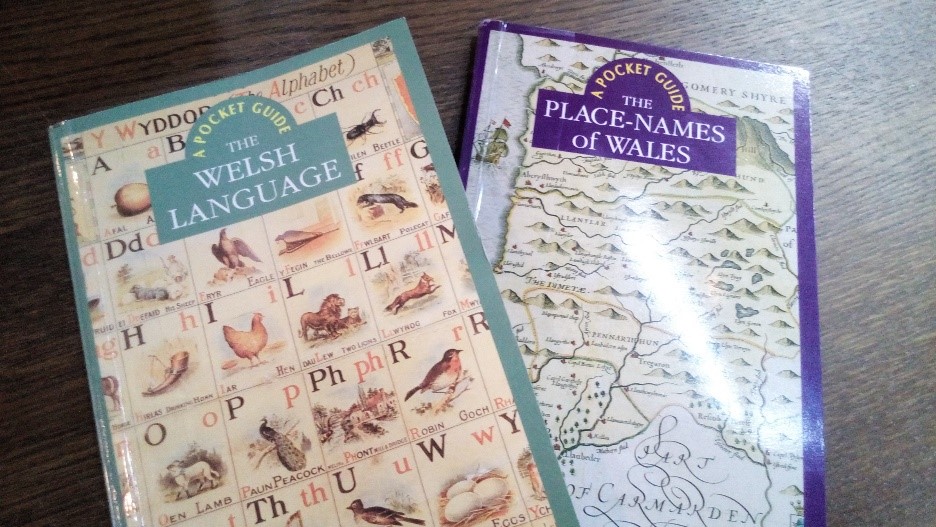 The Library also offers a variety of books which have been translated from Welsh to English such as The Bloodaxe Book of Modern Welsh Poetry (classmark R/50W/ELF) which enables English speakers to appreciate the craft of Welsh poetry without turning to the Welsh dictionary. However, it’s important to state that some instances of Welsh language cannot be translated to English without losing their original meaning. There are some Welsh words that simply do not carry the same effect when translated into English, for instance the Welsh word ‘hiraeth’ usually translating to ‘nostalgia’ in English, but it’s much more than just nostalgia, it’s the bond between a person and their home/country and the feeling of loss that effects the person when they’re not in their homeland. 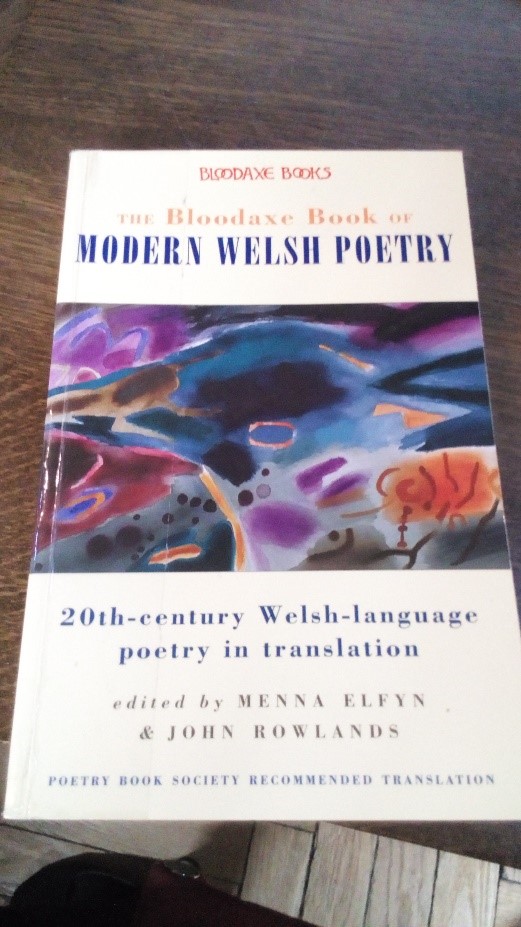 Gladstone’s does offer a fair few Welsh dictionaries located in our Annex corridor for those who wish to tackle some of our Welsh materials or want to discover more words and phrases such as ‘hiraeth’.

This was just a small glimpse at our many materials either written in Welsh or concerning the language and country. We are extremely grateful to be a Welsh institute and also a part of Welsh heritage and I hope that by sharing some of our Welsh collections with you, you can see that the Welsh language is very much alive in our library, and we warmly welcome those who speak it, those who are learning, and anyone inbetween!

Diolch am ddarllen/ Thank you for reading!