Book Recommendations from Alibis in the Archive 2021

Book Recommendations from Alibis in the Archive 2021 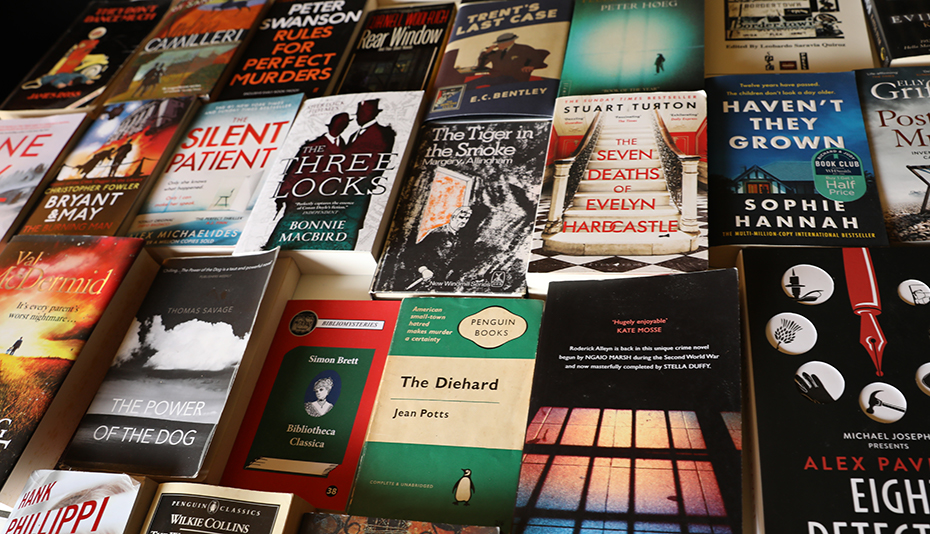 If you're looking to crack open a new crime novel, we have you covered. Alibis in the Archive, the festival of crime fiction, took place this month. In response to audience requests, several of the speakers nominated their recommended reads. Among them are somewhat neglected treasures, key works in the genre and unsung authors.

Martin Edwards, a multiple award-winning crime writer known for his Lake District series and Liverpool series of mysteries, is the organiser of Alibis in the Archive. This is his recommendation:

I am going to be be cheeky and say Howdunit, by ninety members of the Detection Club, which I edited. It’s packed with crime writing tips and insights into the craft.

L. C. Tyler chaired the Alibis 2021 panel The Timeless Appeal of Crime Fiction. He authors both contemporary and historical crime fiction and has been nominated for and won numerous awards in the UK and the US.

My recommended reads include Ruth Ware, One by One - A traditional mystery with a very modern twist. Outstanding storytelling and stylishly written.

Stuart Turton, The Seven Deaths of Evelyn Hardcastle - A fascinating story and completely original, while remaining, at heart, a whodunnit set in a country house.

Gladys Mitchell, The Rising of the Moon - Possibly her best book. A brilliant opening, startlingly vivid characters and lots of bodies. Frighteningly accurate on how a teenage boy’s mind works. Improbably, makes Brentford seem exotic and magical. You will forgive the usual confused resolution.

Gladys Mitchell, Death at the Opera - An excellent traditional mystery, again with great characters, and a Gladys Mitchell plot that actually remains coherent almost to the very end.

Antonia Hodgson, author of The Devil in the Marshalsea and A Death at Fountains Abbey also took part in the panel, where she highlighted the work of several unsung crime writers.

I recommended Daughters of Night by Laura Shepherd Robinson and City of Vengeance by D.V. Bishop. Both wonderfully smart, atmospheric and gripping historical crime novels by two authors with great things ahead of them.

Michael Jecks, known for his historical mysteries, including The Moorland Murders, also joined the panel, where he discussed the merits and pitfalls of writing the past.

My recommendations are, in non-fiction, Living with Shakespeare by Geoffrey Marsh, published this year by Edinburgh University Press - an absolutely brilliant study of St Helen’s Parish, London, 1593-98.

In fiction I suggest Light Cavalry Action by John Harris, a superb court room drama set in the run-up to the Second World War, looking at the horrors of the end of the British Army campaign in support of the White Russians in 1919. Sadly, I think, it’s out of print, but well worth getting a copy if people can find one.

Verena Rose is a Chair at Malice Domestic based in Gaithersburg, Maryland. She took part in the Alibis in the Archive 2021 panel entitled Traditional Detective Fiction Today, which provided a North American take on the genre.

Elizabeth Peters – her Amelia Peabody series. This is an historical series mostly in the Victorian era. Amelia goes off to Egypt and ends up marrying an Egyptologist.

These are great fun and I highly recommend them. Readers should start at the beginning. Malice Domestic created an Amelia award that isn’t given yearly but we give it to someone who has contributed significantly to the mystery genre – it could be an author, editor, publisher, or fan.

Donna Andrews – her Meg Langslow series. This is a contemporary series that currently has 29 books. Donna has won just about every mystery award there is to win. These mysteries have a great deal of humour in them.

Victoria Hamilton – her Gaslight series. These take place in old New York city and each book is named for an area of the city. I look forward to reading the new one every year.

One of yours but Anne Perry. I love both of her historical series but the books that I look forward to each year are her Christmas Novellas. They are wonderful and I highly recommend them.

And I’ll add one more. One of my all time favourite authors is Lindsey Davis and her M. Didius Falco series which now has morphed into the Flavia Albia series. Malice Domestic honoured her several years ago as our very first International Guest of Honour It was a thrill to get to meet her.

Shawn Reilly-Simmonds is a longstanding member of the Malice Domestic group. Her recommendations were:

We are planning to host Alibis in the Archive again in 2022. Email enquiries@gladlib.org if you want a notification once tickets are available.