Rachel Malik on Horne’s Guide to Whitby and Dracula

Rachel Malik on Horne’s Guide to Whitby and Dracula 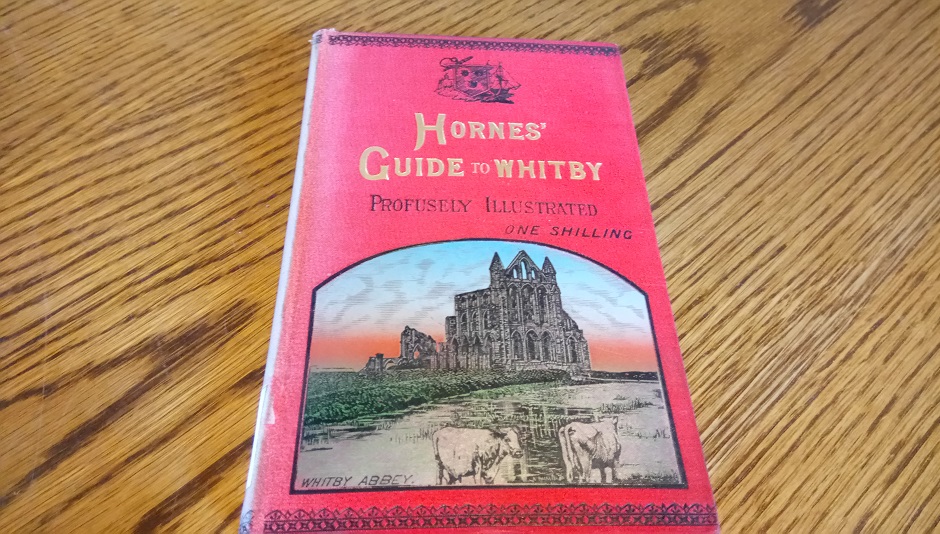 A few of the many things I loved about my stay:

The rook convention outside the library; window sills so wide you can organise your life on them; the giant woodpigeons; the mushroom quiche; that there is a book called The Best Books which Gladstone wrote his name in (some things seemed simpler in the late 19th Century); treacle tart; that I thought a lot, read a lot and wrote quite a lot. That I worked out on the last day my villain’s bad, bad secret. Guilty pleasure: watching both series of The Hour again in the evenings. I love Romola Garai.

On one of my first days in the library, I found myself sitting next to a shelf of 18th and 19th Century travellers’ guides. Horne’s Guide to Whitby: Profusely Illustrated (1890) is a pocket-sized red book with an image of the ruined Abbey in the setting sun on the cover. Whitby always makes me think of Bram Stoker’s Dracula (1897) – a novel I love. It’s where, quite early in the novel, Mina (goody two shoes fiancée of solicitor Jonathan Harker) and Lucy (Mina’s late-Victorian bad-girl friend) meet for a short holiday. It’s also the arrival point for the Count when he reaches England. Whitby’s Gothic credentials seem to be the important thing in the novel at first: the ruined Abbey and broken graveyard are the perfect setting for the great storm and sea-fog that brings Dracula’s ship, The Demeter, aground (empty but for the dead captain strapped to the ship’s wheel). So far, so extreme.  But what’s interesting, comparing Horne’s Guide with Mina’s accounts of Whitby in her journal, is that ‘Mina’s’ Whitby is the Whitby of Horne’s Guide. Lucy and her mother have rooms in a house in The Crescent. The adverts at the back of the Guide picture a number of hotels and rooming houses - The Royal Hotel, The Crown, The Angel – and shops which primarily cater to the tourist trade: photographers, jet jewellery sellers (where the visitor can ‘observe the different processes of manufacture’), shoe shops that specialise in walking boots, sand shoes and repairs. In Mina’s early Whitby entries, she is visiting a tourist town, full of things to see, views. The Guide lists them, including the best places to watch the boats and Mina knows how to look or see like a tourist. She quickly adopts a favourite spot in St Mary’s graveyard because of its wonderful views. Mina and Lucy take evening strolls and listen to ‘good’ music. They visit Robin Hood’s Bay where they have ‘a capital “severe” tea in a sweet little old-fashioned inn’, a place recommended by the Guide for its picturesque charm, and contrasted with busy Whitby. This is not just touristic Whitby, it is modern Whitby. The Guide makes a point of describing the museum’s fashionable dinosaur fossils and the Pickering to Whitby rail journey is recommended for its geological variety – geology is another modern science. Lucy later plays tennis with her fiancée, Arthur. The Guide also devotes some pages to local myths and legends -  the bells ringing from the sea etc. -  addressing knowing visitors who can enjoy their superiority over ‘vulgar’ believers in the supernatural - but still enjoy a little frisson. When the Demeter comes aground, a great black dog rushes from the ship and in the days that follow some forward-thinking souls are concerned for its safety and want to contact the local Society for the Prevention of Cruelty to Animals (S.P.C.A). The reader can enjoy the jarring misjudgement here about who really needs protection – she already knows from Harker’s journal that Dracula is a shapeshifter. Leafing through the illustrations in the Guide, it seems right that Dracula should arrive in Whitby. The drama of the Demeter makes for a very modern spectacle. A crowd gathers to look at the ship; a new mass audience reads about it in the newspaper cut out by Mina and stuck into her journal. Earlier, with Jonathan, the Count has displayed modern as well as atavistic urges: ’I long to go through the crowded streets of your mighty London, to be in the midst of the whirl and rush of humanity’. Dracula wants to be at large in the modern city, the city of the crowd. Whitby isn’t London but it makes a good starting point for his well-organised progress.

Another thing I loved: a walk in the woods, yellow moss everywhere, wild garlic all along the path, growing thick, right down to the stream. Wild garlic.