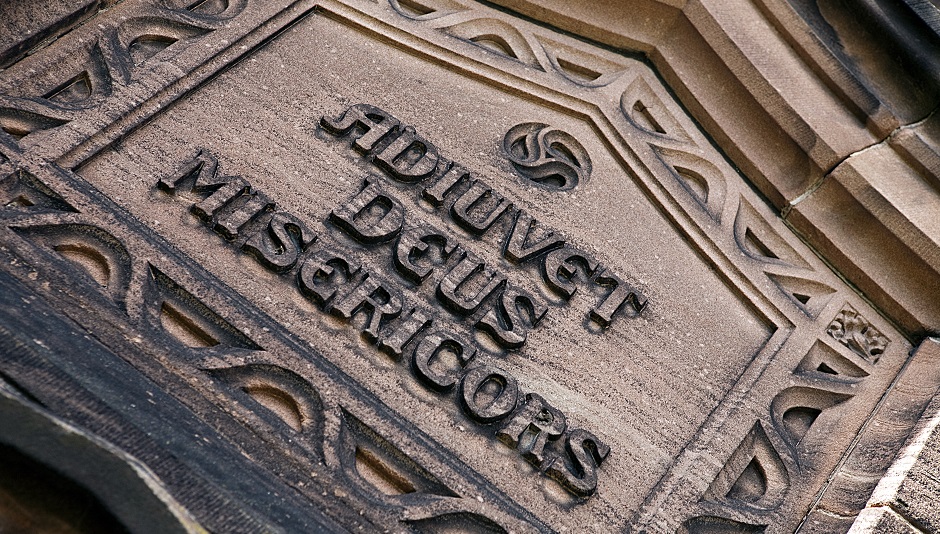 Have you ever wondered what the above symbol is? We use it everywhere - on our website, on our social media, our merchandise, even our business cards – it has, in time, become the symbol for Gladstone’s Library. But what exactly is it a symbol for? Where does it come from and what does it mean?

These are tough questions to answer, because to look at typical religious, historical and cultural symbols you won’t easily find it; it is not unanimous like a crucifix, Star of David or Ying-Yang. However the symbol must have been significant to either William Gladstone or, more likely, John Douglas, the architect of the Gladstone's Library building, as it is carved in to the stone above the doorway, greeting all who enter.

By sheer coincidence I came across digital art of a symbol described as a ‘World Triad’ and thought I had solved the mystery - it looked identical to ours. Described on some websites as ancient with Eastern routes, the World Triad seems to be a curious but perfect fit. However it is uncertain to what extent the ‘World Triad’ actually exists with that name outside of the internet. Many websites describing the World Triad as 'ancient' offer no sources and no photographs of the symbol. It is probable therefore that drawings of real versions of the symbol have found their way in to collections of sacred geometry – eastern religious symbols popular with modern, western spiritual movements – and lacking a name have been given the title ‘World Triad’ (though there are very similar eastern symbols such as the Buddhist Gankyil, and Japanese Mitsudomoe, which could also explain the symbol’s supposed eastern routes).

While the symbol could indeed be one of eastern origin, and it may represent both the eastern and western variations, the symbol is most likely a triskelion; a western, Christian symbol found on churches and stonework throughout Europe.

The triskelion is ancient; in its original form as three spirals meeting in the middle, the symbol appears thousands of years before Christ in Greece and Italy, and in Britain and Ireland as a Celtic symbol. However in this form as three spirals the triskelion looks like a completely different symbol to the one adorning our Library building. But when Christians took on the symbol for use as ornamentation in Churches the symbol changed to the one we recognise now. Usually used in windows rather than stone or woodwork, the triskelion as a Christian symbol loses the spirals in favour of three large water droplet-like shapes, perhaps in an effort to distance the symbol from its ancient routes, or simply to let more light in when used as a window.

John Douglas was more than familiar with Church decoration, having made a career out of designing new Churches before being commissioned to design William Gladstone’s new library, and was likely the individual responsible for the symbol’s placement in our Library, rather than Gladstone himself.

Despite being an almost exclusively theological library for most of our history, the building does not boast much Christian imagery; it is only above the entranceway that visitors are welcomed by a small statue of St. Deiniol in the niche; the Latin Adiuvet Deus Misericors, meaning ‘Merciful God, help us’; and of course the triskelion. However those familiar with the Reading Rooms themselves will know of the church-like feel one gets when studying here, and that is no accident. As well as being a completely silent space, the vaulted ceiling is unmistakably church-like. As our Director of Collections and Research Louisa Yates pointed out in her recent presentation on the history of the Gladstone’s Library Reading Rooms, Douglas has designed narrow, vertical shapes all over the library (including the shape of the windows) in order to direct absent gazes upwards towards the heavens in moments of contemplation. Sharp-eyed visitors may have also noticed the subtle presence of the triskelion in the woodwork above the fire door and in the History Room.

Image 1: Carving in the History Room at Gladstone's Library

Image 2: Carving above the Theology Room door at Gladstone's Library

So then finally why has the triskelion been chosen as the one exception, as the only overtly Christian image Douglas chose to decorate the building with? The symbol of three in one can mean the Father, the Son and the Holy Ghost, and life, death and rebirth, but in both cases the symbol represents eternity. Gladstone donated 30,000 of his own books which he’d spent his entire life collecting, as well as the equivalent of £8 million to this library, one that he knew he would not get to see in his lifetime. The library is Gladstone’s attempt at making sure people would always have access to this knowledge after his death and a silent place for people to work, reflect and better themselves. The triskelion is both a tribute to and emblem of this vision, much the same as the collection itself, honouring the everlasting pursuit of knowledge and self-betterment that Gladstone lived and encouraged. It is only fitting that it has become our symbol for Gladstone’s Library.