Alibis in the Archive 2021 Online 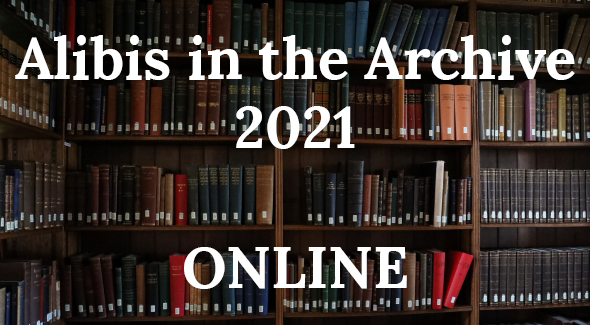 Alibis in the Archive is back. Organised by award-winning crime writer Martin Edwards, this event features acclaimed authors who will pull back the curtain on the art of penning compelling crime narratives.

Eats, Shoots, and Leaves… the Crime Scene with Lynne Truss and Simon Brett

Where would any successful detective novel be without its central feature? The crime scene is perhaps the greatest unsung character in crime. In their conversation, Lynne Truss and Simon Brett discuss the many and varied spots where some of the world's greatest mysteries have begun.

Lynne Truss turned to crime after a varied and successful career in print and on radio, but is best known for her bestselling book on punctuation, Eats, Shoots & Leaves, which sold three million copies worldwide. The fourth of her Constable Twitten series, Psycho by the Sea, was published in June by Raven Books. This month a collection of 26 Radio 4 stories, Life at Absolute Zero, is released by BBC Worldwide.

Simon Brett is President Emeritus of the Detection Club, winner of the CWA Diamond Dagger award, and author of over 100 books, including the Charles Paris series. His novel A Shock to the System was filmed with Michael Caine in the lead.

Asking whodunit is all very well, but what about the how?

Multi-award winner Martin Edwards, author of Gallows Court and Mortmain Hall, will distil some of the crime-writing wisdom to be found in Howdunit: A Masterclass in Crime Writing by Members of the Detection Club, also edited by Martin, which won this year’s HRF Keating Award for best critical/biographical book in the crime field and was nominated for five other awards in Britain and the US.

Martin will be joined by editor, publisher and crime aficionado David Brawn of HarperCollins, and their conversation will encompass not only tips for would-be crime writers but also insights into the ups and downs of the crime writing life.

Murder on Stage with Rupert Holmes and Joseph Goodrich

Rupert Holmes is not only a highly successful singer-songwriter whose hit singles include ‘Escape (The Pina Colada Song’) and ‘Him’ but also a multi-award-winning crime writer who has achieved success with novels, plays, and musicals. He created the hit US TV dramedy series Remember WENN, writing all 56 episodes as well as the theme song, won two Tony awards for the musical The Mystery of Edwin Drood, and saw his crime novel Where The Truth Lies filmed with Colin Firth and Kevin Bacon in the lead roles. His mystery play Accomplice won him his second Edgar, while Curtains, a musical co-written with Kander and Ebb, won the New York Drama Desk Award for Best Book and was enjoying a major British tour with Jason Manford in the lead prior to the pandemic interrupting its run in 2020.

Joseph Goodrich is a multi-talented American writer and actor who won an Edgar for his stage play Panic. His work has been produced across the United States and in Canada, Australia, and China. He is the author of the first officially sanctioned stage adaptations of novels by Ellery Queen and Rex Stout. His fiction has appeared in Ellery Queen’s Mystery Magazine, Alfred Hitchcock’s Mystery Magazine, and two Mystery Writers of America anthologies. His books include Blood Relations, a study of Ellery Queen, and Unusual Suspects, a compilation of essays about the genre. An alumnus of New Dramatists, an active member of MWA, and a former Calderwood Fellow at MacDowell, he lives in New York City.

There’s no police like Holmes, featuring Bonnie MacBird in conversation with David Brawn

We’re kicking off Alibis on Sunday with a one of the genre’s most famous figures, Sherlock Holmes.

After a long Hollywood career as a screenwriter, story exec and producer, Bonnie MacBird now writes The Sherlock Holmes Adventures for HarperCollins – last year’s The Three Locks was the fourth in the series, all of which have been published to critical acclaim. As Bonnie is going to discuss to David Brawn she thinks that Sherlock Holmes is just what readers need in these troubled times.

Bonnie MacBird has worked in almost every writing medium. First finding success as a feature film development executive at Universal, Bonnie also wrote the original screenplay for Tron and won three Emmy Awards for writing and producing documentaries. She is a playwright, actor and director and teaches a screenwriting course at UCLA Extension. Bonnie’s first novel Art in the Blood was written in the style of Arthur Conan Doyle – published in 2015 to critical acclaim, it was soon followed by Unquiet Spirits (2017) and The Devil’s Due (2019). Her next book will be The Three Locks (2020).

David Brawn has been at HarperCollins for 30 years, more than 20 of which as Publisher of Agatha Christie and other literary estates, including Ngaio Marsh, Alistair MacLean, Desmond Bagley and also J.R.R. Tolkien. As well as managing Agatha Christie’s existing backlist, David has overseen the publication of unseen stories, play novelisations, continuity novels and biographies, as well as expansion into new formats including audiobooks and ebooks. He has compiled, edited and introduced a variety of books, including Agatha Christie’s Little Grey Cells: The Quotable Poirot, and in 2015 was responsible for relaunching Collins’ famous Crime Club, bringing many classic detective writers back into print, including books by Freeman Wills Crofts, Philip MacDonald, Anthony Berkeley, Edgar Wallace, J.Jefferson Farjeon and Francis Durbridge.

Taken together our four speakers have authored over one hundred books that cover every element of crime: mystery, satire, comedy, fiction, non-fiction…their books have won multiple awards and helped to define contemporary crime fiction.

Michael Jecks is the author of nearly fifty crime and mystery novels and collaborated on eight other titles. Shortlisted for the CWA Ian Fleming Steel Dagger, he has been a full-time author for nearly thirty years and lives on Dartmoor.

Ruth Dudley Edwards is an historian and journalist. The targets of her satirical crime novels include the civil service, gentlemen’s clubs, Cambridge University, the House of Lords and literary prizes. She won the CrimeFest Last Laugh Award for Murdering Americans in 2008 and in 2010 the CWA Non Fiction Gold Dagger for Aftermath: the Omagh bombings and the families’ pursuit of justice.

L C Tyler is a former chair of the Crime Writers Association who is the author of both contemporary and historical crime fiction. He has twice won the Last Laugh Award for the best comic crime novel of the year and a CWA Dagger for his short story ’The Trials of Margaret’, as well as being shortlisted for the CWA Historical Dagger and for the Edgar Allan Poe awards in the US.

Antonia Hodgson is the author of the bestselling Thomas Hawkins historical crime series. She has been shortlisted for the Theakston’s Crime Novel of the Year, and her debut, The Devil in the Marshalsea, won the CWA Historical Dagger.

Our final event of the weekend is also an Alibis first! Gladstone’s is used to international writers but this is the first time we’ve had a live event from overseas. I’m very pleased to introduce the board members of Malice Domestic, one of the USA’s biggest crime conventions. Founded in 1989 to celebrate the traditional mystery story, Malice Domestic regularly welcomes hundreds of fans and authors alike. It even has its own awards, the Agathas, awarded across six categories.

Art Taylor is the author of The Boy Detective & The Summer of ’74 and Other Tales of Suspense and the winner of the Agatha, Anthony, Derringer, Edgar, and Macavity Awards for his fiction. He is an associate professor of English at George Mason University.

Shawn Reilly Simmons is the author of seven novels in the Red Carpet Catering Mystery series, and of over twenty published short stories. Shawn has won the Agatha Award for her short fiction and the Anthony Award for editing; she works as an editor at Level Best Books and serves on the Board of Malice Domestic.

Tonya Spratt-Williams is an avid reader and devoted mystery fan. She is a former member of the Malice Domestic Board of Directors.

As part of a new access initiative here at the Library, all our non-residential events will have one free place available. Details coming soon.

Please note that tickets for this event are e-tickets. Book online and have your ticket emailed directly to you – there is no need to print out an e-ticket for a digital event, but please retain your ticket as proof of purchase.

You now have the option to save your tickets in your Gladstone Bag! For more information see here.