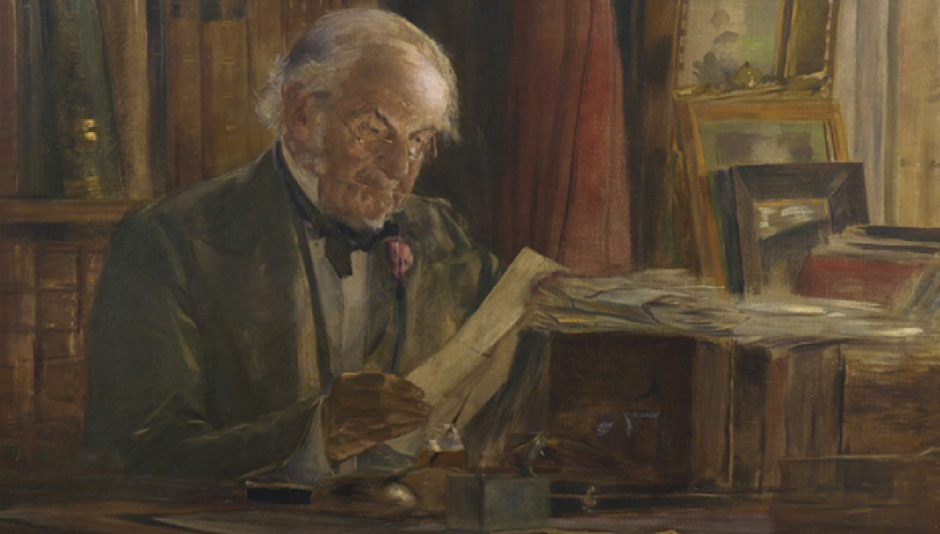 William Gladstone and his Library

Gladstone's Library is a unique institution. It is Britain's finest residential library and its only Prime Ministerial library. It was founded by the great Victorian statesman, William Ewart Gladstone and, following his death in 1898, became the nation's tribute to his life and work. A lifelong student and scholar, as well as a voracious reader and collector of books, Gladstone built up a remarkable personal library reflecting the wide range of interests of a true Victorian polymath.

The library, which Gladstone was eventually to give to the nation, was entirely his own creation. Its formation began when, as a young boy - the son of a wealthy Liverpool merchant and benefactor - he was presented with a copy of 'Sacred Dramas' by its author, Hannah More. Books acquired at Eton followed and the collection really began to grow during his time at Christ Church, Oxford where he achieved a double first in Classics and Mathematics with another first in History, one of his passions. His habit of annotating books continued throughout his long political career (sixty-three years of active politics and four times Prime Minister). His diary records regular searches of bookshops and book catalogues, and the reading of books in his study at Hawarden Castle - a room he called the 'Temple of Peace'.

In his later years, Gladstone began to think about making his personal library accessible to others. "Often pondering," wrote his daughter, Mary Drew, "how to bring together readers who had no books and books who had no readers, gradually the thought evolved itself in his mind into a plan for the permanent disposal of his library. A country home for the purposes of study and research, for the pursuit of divine learning, a centre of religious life."

William Gladstone saw that the books classified as divinity and humanity would be of great value to members of all Christian denominations but he also wished students from other faiths, or none, to have equal access to them. Such potential readers needed a place where they could stay and read with time to think and write in a scholarly environment.

The first step towards fulfilling this vision was taken in 1889 when two large iron rooms were erected with six or seven smaller rooms to act as studies. This building became known as the "Tin Tabernacle" or "Iron Library". Gladstone, over eighty years old, was closely involved in the transfer of 32,000 of his books from Hawarden Castle to their new home a quarter of a mile away, undertaking much of the manual labour himself, helped only by his valet and one of his daughters. Many of the books were moved by wheelbarrow. "What man", he wrote, "who really loves his books delegates to any other human being, as long as there is breath in his body, the office of introducing them into their homes?"

This temporary building was only the start of realising his ambition to create a residential library. Gladstone discussed his hopes with his family and with the trustees appointed to care for the collection. He endowed the library with £40,000, thereby indicating that this was more than a hobby or a sideline: this was his major bequest.

Following the death of William Gladstone in 1898, a public appeal was launched for funds to provide a permanent building to house the collection and to replace the temporary structure. The £9,000 raised provided an imposing building, designed by John Douglas, which was officially opened by Earl Spencer on October 14th, 1902 as the National Memorial to W. E. Gladstone. The Gladstone family were themselves to fulfil the founder's vision by funding the residential wing which welcomed its first resident on June 29th, 1906 and which was dedicated by A.G. Edwards, Bishop of St. Asaph on January 3rd, 1907

Throughout this century, the Library has continued to acquire books specialising in those subjects that were of most interest to Gladstone. There are now over 150,000 volumes of theology and history as well as excellent material on philosophy, classics, art and literature. The Library also houses important collections of manuscripts including much of Gladstone's own correspondence.

In 1905, James Cape Story, a regular user of the Library, described it as "a temple of learning...a place for restful meditation, for research, for mental and spiritual refreshment and stimulus - and this amid charming natural surroundings, at the feet of the Welsh mountains". Today, this remarkable institution remains a haven in which writers, students, researchers, bibliophiles, clergy and laity of all denominations can work or rest at the minimum charge envisaged by its founder.