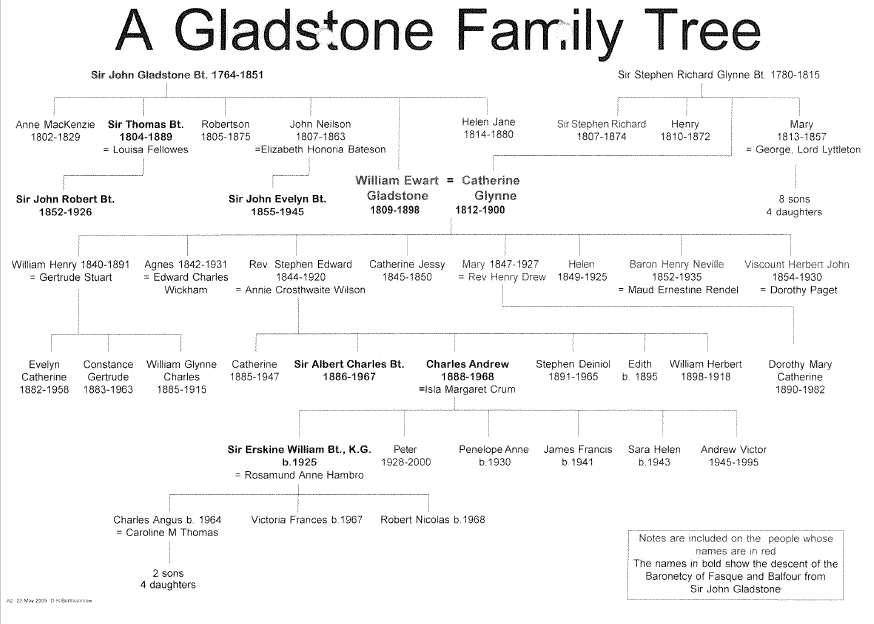 Born in Liverpool in 1809, William Ewart Gladstone was a highly influential politician of the 19th Century. He first entered parliament at the age of 22 and remained in politics well into his eighties. He was Prime Minister four times and is still the longest serving PM in our history. His parliamentary achievements ranged from acts on universal primary education to intervention in the oppression of the Bulgarians by the Ottoman Empire. During his later years, he resided in Hawarden Castle with his family where they were greatly involved in the village. W. E. Gladstone commissioned his library so that his collection of 30,000 books could be accessible to anyone. He was a devout Christian which still influences the library today. Gladstone’s personal book collection focuses on the core subjects of theology, history, and literature and can all be viewed in our History Room here at Gladstone’s Library.

Catherine Gladstone, born 1812, was the daughter of Sir Stephen Glynne and the wife of William Ewart Gladstone. She was the mistress of Hawarden Estate, and was known for her lively personality and philanthropic work. She was very involved in Gladstone’s career, often travelling alongside him during his campaigns, and influencing his decision to be in office for his final term. A notable achievement of Catherine Gladstone was her opening of the Free Convalescent Home and her orphanage for boys. She was known for providing employment for individuals living in poor conditions, and helping children during the cholera outbreak of 1866. She was as devout a Christian as her husband and during her later years could still be seen trudging each day to St. Deiniol’s Church from her home.

Sir Stephen Richard Glynne was the 9th Baronet of Hawarden Castle and the brother of Catherine Gladstone. While Stephen had some involvement in politics, representing Flint as a Liberal MP, his main interests lay in history and architecture.

Sir John Gladstones was born in Leith, Scotland in 1764. He was a Scottish merchant, slave-trader and Member of Parliament as well as W. E. Gladstone’s father. John moved to Liverpool in 1787, after learning the mercantile trade in Leith from his father, Thomas Gladstones, who himself was born the son of a miller and a farmer. John Gladstones, after moving to Liverpool, entered the house of grain merchants Corrie & Company as a clerk at first, but was soon made a partner, the name of the house changing to Corrie, Gladstone & Bradshaw. John dropped the ‘s’ from Gladstones to Gladstone, which was officially recognised only in 1835. He made his fortune trading in corn with the United States and cotton with Brazil. He married Jane Hall in 1792, who was the daughter of a Liverpool merchant herself, but died before having any children in 1798.

Sir John Gladstone married his second wife, Anne MacKenzie Robertson, in 1800, with whom he had six children. John argued in favour of slave trade in 1806, when it was brought into the House of Commons as an election issue, opposing the later views by his fourth son, William Gladstone. He also became the chairman of the Liverpool West India Association and was a defender of the rights of the West Indian planters. He was created a Baronet by the Prime Minister of the time, Sir Robert Peel, in 1846. He eventually returned to Fasque in Scotland in 1829, where he died in December 1851 and lies buried in St Andrew’s Episcopal Church. He lived to be 87 years old.

Anne McKenzie Robertson was born in 1772. She was the daughter of Andrew Robertson (a solicitor, and sometime Provost of Dingwall in Ross-shire), and his wife Anne McKenzie. She was born on 4 thAugust 1772 at Dingwall, Ross-shire, Scotland. She married Sir John Gladstone in 1800, and they had six children together; Anne MacKenzie, Sir Thomas, Robertson, John Neilson, William Ewart, and Helen Jane Gladstone. Anne MacKenzie Robertson Gladstone died at Fasque in Kincardineshire, Scotland, on 23rf September 1835. She lived to be 63 years old.

Henry 'Harry' Neville Gladstone was born to William and Catherine Gladstone in London, in 1852. He was their third son and seventh child. He was said to have a very strong bond with his younger brother Herbert; playing together as children and being educated at the same time, they corresponded regularly during their adult lives and acted together in the family interest after their parents’ death. Henry found it hard to settle at boarding school, and he and Herbert wrote to Mary, their sister, about their misery. Of course it was not just misery – the odd prank was also schemed and carried out, and promptly punished. Henry was enamoured with trains, and, when coming home from Eton, which he had started to attend in 1869, he left the evening before the holidays began, to have the “supreme pleasure” of travelling on the night Irish mail train to Chester. His love for railways endured during his adulthood, and he became a financier and manager of railways. Henry was then sent to King’s College in London to study business, working part-time as his father’s private secretary for a few hours a day, and had what we nowadays call 'internships' in different family businesses. He married Maud Ernestine, daughter of Lord Stuart Rendel, in 1890. He was named Baronet, Lord Gladstone of Hawarden in 1932. He died only three years later, in 1935, and is now buried amongst family members in St. Deiniol’s churchyard. He lived to be 83 years old.

Viscount Herbert John Gladstone was born in 1854, just two years after his brother Henry. W. E. Gladstone gave his sons 10 shillings per term, increasing by one shilling every term or half-term. This is the advice Herbert was given when he was 15: 1. Give a tenth, not less. 2. Save a tenth if you can. 3. Lay out your money on things that last. 4. Keep regular accounts of what you receive or pay. 5. Keep your money locked up. 6. Remember that what you get the first day of the quarter is to last for the whole quarter. 7. On no account get into debt. 8. Count your money when you get it. 9. Never buy anything bad of its kind. 10. Keep your wants within your means.

Herbert went on to University College in Oxford, gained a first class degree and taught History at Keble College. Herbert married Dorothy Paget in 1901. Herbert became Home Secretary for four years in 1905 under the Asquith Government, during which he became a supporter of Votes for Women. He was appointed as the first Governor-General and High Commissioner of the new Union of South Africa. He was named Lord Gladstone and the last years of his life went by quietly, he died in 1930 in Hertfordshire, his family home. He lived to be 76 years old.